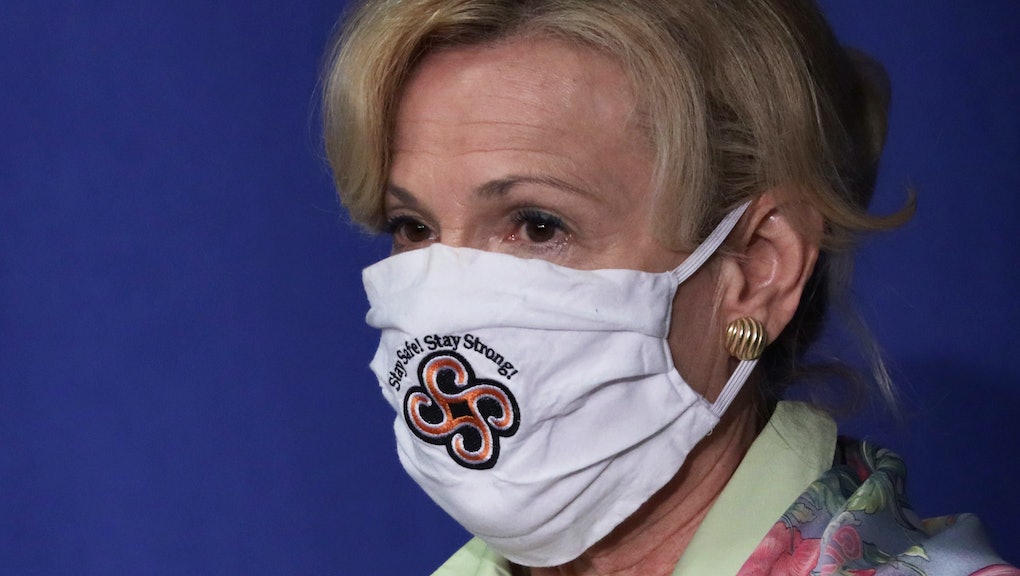 Early on in the coronavirus pandemic, President Trump claimed that the death toll wouldn't exceed 60,000. In May, Trump adjusted his prediction to 100,000 — which the United States long ago skyrocketed past. And unfortunately, the pandemic is far from over. On Sunday, Dr. Deborah Birx said the United States is "in a new phase" of the pandemic. The warning, however, marks a stark change from some of Birx's earlier comments.

During an interview with CNN's Dana Bash, Birx, who serves as the White House coronavirus task force coordinator, said, "What we are seeing today is different from March and April. It is extraordinarily widespread. It's into the rural as [well as] urban areas."

Since the pandemic began, the U.S.'s epicenter has moved from coast to coast; New York City was the virus's first hotspot, but the national epicenter then moved down south to Florida, with California meanwhile making dubious history all the way west. Last month, data from John Hopkins University showed that more people have tested positive for coronavirus in Florida compared to New York.

But Birx's warning about coronavirus's spread into rural areas — nearly five months after the pandemic first hit the U.S. — it itself months behind previous reporting. In May, The Washington Post covered coronavirus's surge in rural communities. And that same month, Native American communities — including rural ones like the Navajo Nation — were ringing the alarm about the lack of coronavirus aid.

"To everybody who lives in a rural area, you are not immune or protected from this virus. If you're in multi-generational households, and there's an outbreak in your rural area or in your city, you need to really consider wearing a mask at home, assuming that you're positive, if you have individuals in your households with comorbidities."

While the warnings are necessary, Birx's new urgency is a notable change in tone. While Trump has bore — and deserves — the bulk of the criticism for the federal government's mishandling of pandemic, he isn't acting alone. And reports have indicated Birx played a huge role in underplaying coronavirus early on in internal meetings, which helped the Trump administration land on its impotent all-states-for-themselves strategy.

Last month, The New York Times reported that Birx "was more central than publicly known to the judgement inside the West Wing that the coronavirus was on a downward path." According to the outlet, Birx kept telling Trump and his aides in the earlier stages of the pandemic that the U.S.'s trajectory would resemble Italy's, where cases steadily declined after an initial huge spike.

However, Birx's overly optimistic models failed to account for one key thing: states reopening prematurely. In fact, her models were a huge part of why Trump began to pressure states to abandon lockdown and reopen businesses in the spring. The Times reported that not too long after Birx's assurances, Trump began saying he had the authority to reopen states, and egged on right-wing protesters to "liberate" Democratic states.

While Birx — who once worked with the Obama administration — is cautioning the public now, tensions remain between her and Democratic leadership. Politico reported that House Speaker Nancy Pelosi told Treasury Secretary Steven Mnuchin and White House Chief of Staff Mark Meadows, "Deborah Birx is the worst. Wow, what horrible hands you're in."

When asked about Politico's reporting by ABC News's This Week, Pelosi did not back down from the claim that Birx spread disinformation about coronavirus. After being asked if she had confidence in Birx, Pelosi said, "I think the president is spreading disinformation about the virus and she is his appointee, so I don't have confidence there, no."