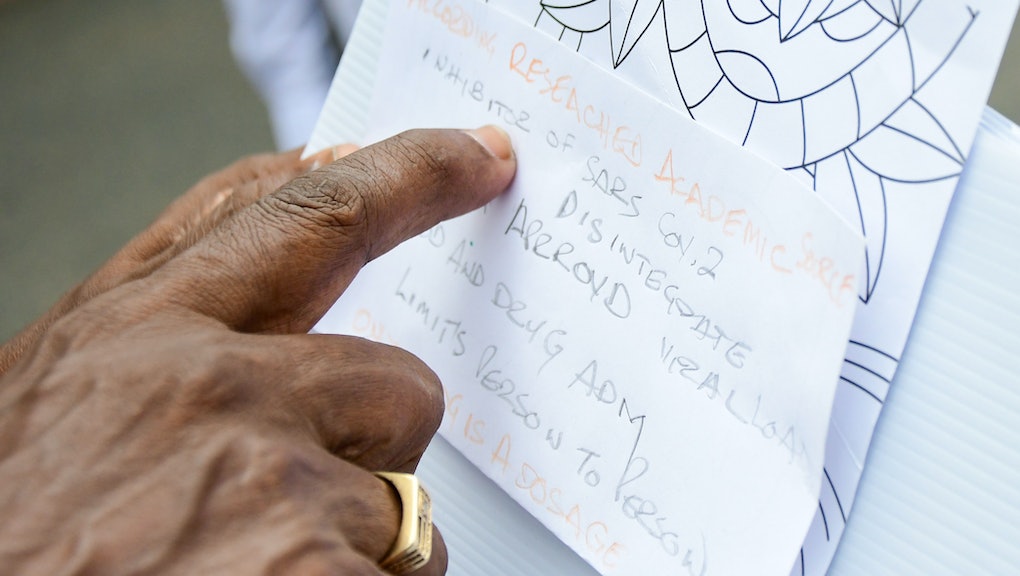 A woman demanded a doctor treat her husband's COVID with horse dewormer. A judge backed her up

First it was sunlight and bleach. Then came hydroxychloroquine. Now, as the coronavirus pandemic surges to new, deadly heights across the country, a sizable portion of the population has decided that a common barnyard deworming agent is the real cure-all for everything. And despite desperate objections from the Centers for Disease Control and Food and Drug Administration (to say nothing of the pleas from frontline doctors), the horse deworming drug Ivermectin is not only being ingested by humans in lieu of an actual, approved, proven effective vaccine, but at least one Ohio hospital has been court-ordered to administer the drug against apparent wishes of the physicians on hand.

Last week, Butler County Judge Gregory Howard ruled in favor of Julie Smith, who had petitioned the court that weekend to force West Chester Hospital near Cincinnati to administer 30 milligrams of Ivermectin a day for three weeks to her husband Jeffrey. Jeffrey Smith has been hospitalized with a severe case of COVID since mid-July and was placed on a ventilator on Aug. 1. The hospital had initially refused the use of Ivermectin as a treatment.

In her affidavit requesting the court order, Smith explained that she came across various news articles regarding the use of the horse dewormer as a COVID treatment. Smith eventually connected with pulmonologist and Ivermectin enthusiast Dr. Fred Wagshul, who issued the prescription for the drug. As it so happens, Wagshul is also the co-founder of the Front Line COVID-19 Critical Care Alliance, a self-described "non-profit organization dedicated to developing highly effective treatment protocols to prevent the transmission of COVID-19 and to improve the outcomes for patients ill with the disease." The group, which dedicates a significant portion of its website to the use of Ivermectin, also cautions in its terms and conditions that it is "not a medical provider and does not provide medical advice."

Despite the wildly inconclusive data regarding Ivermectin's actual effectiveness against COVID — to say nothing of the extreme dangers inherent in humans ingesting a product designed to flush parasites out of barnyard animals (in addition to the risk of poisoning, a common reaction to unchecked Ivermectin ingestion is uncontrollable diarrhea) — Howard's acquiescence to Smith's petition means her husband will begin to receive regular doses of the chemical immediately. The ruling is the latest victory for attorney Ralph Lorigo whom, the Ohio Capital Journal notes, has successfully secured court-ordered Ivermectin treatments against medical advice for a number of other clients in other states too.

The Ohio case is just the latest example in how the bad-faith rejection of the COVID vaccines has created an opening for untested, unregulated chemicals to fill the paranoid void left by those who refuse to listen to overwhelming medical advice. Not only are these cases indicative of people willing to risk their own health or that of their loved ones, but as has been shown by the willingness of some judges to order the use of Ivermectin, it also suggests a strong willingness by some in power to force its use on those not in a position to say no. In Arkansas, for example, a prison physician is currently under investigation for prescribing the dewormer to inmates who lacked the resources to seek a second opinion or other medical treatment.

Whether Ivermectin will be the last unproven snake oil treatment foisted upon those desperate to believe Facebook posts and random physicians over the advice of experts remains to be seen. It's possible that there will be more destructive, unregulated treatments that bubble their way into public life in the future. What is clear, however, is that even if Ivermectin is the actual last gasp of the anti-vaccine holdout community, the damage has already been done.