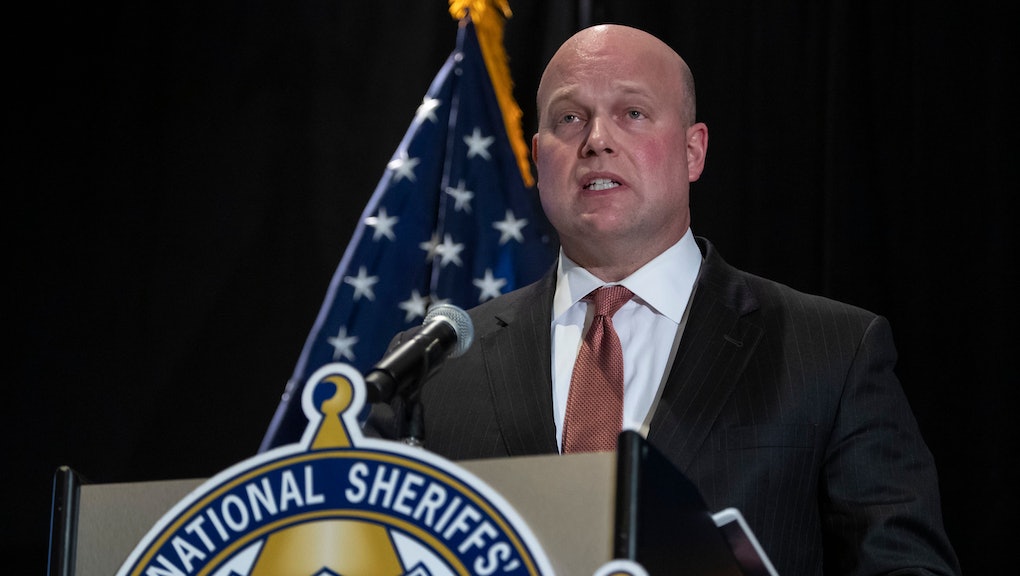 'Abuse of power is not a crime,' says Trump's former attorney general

Matthew Whitaker, the former acting attorney general in the Trump administration, appeared on Laura Ingraham’s Fox News show Tuesday night to offer the kind of full-throated defense President Trump will need to survive the damaging revelations emerging from the House impeachment inquiry. Which is to say, Whitaker argued that abuse of power is basically fine.

No, seriously. “I’m a former prosecutor and what I know is this is a perfect time for preliminary hearings where you would say, ‘Show us your evidence,’” Whitaker said. “What evidence of a crime do you have? ... Abuse of power is not a crime.”

“Let’s fundamentally boil it down,” he went on. “The Constitution is very clear that there has to be some pretty egregious behavior, and [the Democrats] cannot tell the American people what this case is even about.” Whitaker did not respond to Mic's request for comment.

In terms of precedent for impeachment, Whitaker is pretty off-base. President Bill Clinton faced articles of impeachment that included charges of abuse of presidential power, and one of the three articles of impeachment that President Richard Nixon would have faced had he not resigned was over his abuse of power. These accusations didn’t necessarily involve crimes, as Whitaker seems to believe they must, but rather they explicitly centered on a president misusing the power of his office for personal gain.

The notion of abuse of power as a basis for impeachment goes back even further than Nixon. In an 1867 article in The Atlantic, the writer C.M. Ellis described the intentions of the Framers when they came up with the broad “high crimes and misdemeanors” standard for impeachment as follows: “They guarded the people against one form of tyrannical abuse of power; and they intended to secure them effectually against all injury from abuses of another sort, by holding the president responsible for his ‘misdemeanors’ — using the broadest term.” Literal criminal behavior was not necessarily intended as the only condition.

It would seem, then, that Trump threatening to withhold military aid to Ukraine if the country didn’t investigate Vice President Joe Biden, his 2020 election rival — as career U.S. diplomat Bill Taylor alleged in sworn testimony Tuesday — falls squarely under the category of abuse of power.

“Withholding appropriated money is illegal — no [president] has that authority, even if used benignly,” wrote Democratic Sen. Brian Schatz (Hawaii) on Twitter. “Withholding lethal aid for an ally unless they dig up dirt on your opponent is the kind of thing that worried the Framers, and their remedy was impeachment.”

Beyond the legal case, it’s hard to see how Whitaker’s comments could play well politically for the president. Claiming that yes, the president abused his power, but no, there’s nothing wrong with that and he shouldn’t face repercussions, is not an argument that vulnerable House and Senate Republicans will look forward to making in an election year.

Even Republicans took Whitaker to task. “This is a really bad talking point,” tweeted Erick Erickson, a Trump-supporting Republican pundit. “If this is the best the president’s supporters can do, the president is toast.”