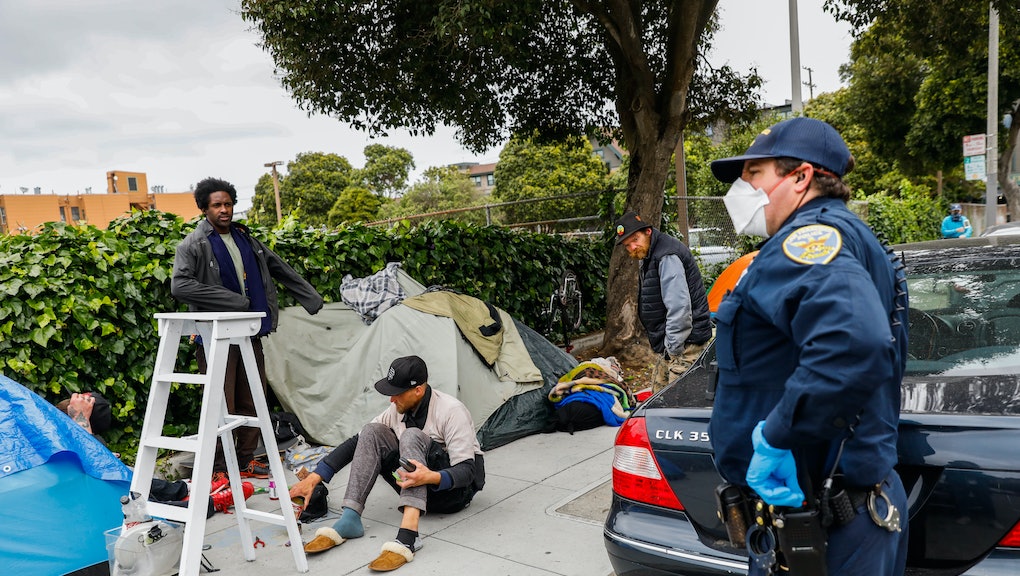 In early March, U.S. governors rushed to address the newly arrived coronavirus by urging their residents to remain indoors. But "shelter-in-place" was a policy demand with a glaring vulnerability: Where would those without homes shelter themselves? Advocates for people suffering from homelessness — many of whom have long pressed for supportive reentry policies, permanent housing for those without homes, and other people-first solutions — say policing those without access to shelter is not a solution. Police aren't trained social workers; they're trained to hand out citations and bring people to jail. And in one jurisdiction, that's exactly what they did: According to The Appeal, Cynthia Falcon, a Hawaii woman without a home, received four separate citations from police — none of which she could pay — for refusing to seek shelter. Without an address, she couldn't receive court summons when hearing dates were changed; and after she missed hearings as a result, the city jailed her.

While the specific circumstances surrounding Falcon's arrest may be unique to the pandemic, her case is just one example of a larger problem. A new report by the Urban Institute illustrates how housing and the criminal-legal system are inextricably linked. In fact, the two are almost circular: Homelessness prefaces incarceration, and incarceration leads to homelessness. By outlining the connectedness between the two systems of prison and housing, the report finds that punitive policing in order to control those without access to shelter is both ineffective and harmful. Rather, arresting and incarcerating people for non-violent crimes resulting from homelessness — such as public urination or sleeping in public — destabilizes their lives further, separates them from support systems, and reduces the likelihood that they'll find employment in the future.

A lack of shelter increases interactions with police

One of the primary ways those who do not have access to shelter or a safe home become introduced to the criminal-legal system is through frequent interactions with police. A survey of more than 64,000 people conducted between 2015 and 2017 and analyzed by the California Policy Lab found that unsheltered individuals reported an average of 21 contacts with police over a six month period — 10 times the number of interactions reported by people living in shelters.

There's such a predictable pathway between the lack of shelter and incarceration that the Urban Institute dubbed it the "homelessness-jail cycle," which rotates people through emergency facilities, treating hospitals, and jails. "This cycle does nothing to help people access the housing and services they need, such as mental health or substance use treatment," the report stated.

Reentering society without access to safe and stable shelter

As the Prison Policy Initiative, a non-partisan organization that researches the harms of mass incarceration, asserted in a 2018 report on homelessness and incarceration, "Stable housing is the foundation of successful reentry from prison." Yet so often, stable housing is not available to those reentering society.

Just as there's a homelessness-to-jail cycle that plays out because of preexisting economic and social instability, there's also a prison-to-shelter pipeline for similar reasons. People who are released from prisons often lack access to systems of support, have very little or no savings, and subsequently face additional hurdles to employment because of prejudice against those with a conviction history, as outlined in the 2020 annual report by the Coalition for the Homeless, a New York City-based advocacy organization.

People who have been incarcerated are also more likely to be discriminated against when it comes to housing. Because those who are incarcerated tend to be low-income or have less access to alternative financial support such as family wealth, they have fewer options for housing. "Excluding formerly incarcerated people from safe and stable housing has devastating side effects: It can reduce access to healthcare services (including addiction and mental health treatment), make it harder to secure a job, and prevent formerly incarcerated people from accessing educational programs," the Prison Policy Initiative stated in its report. "Severe homelessness and housing insecurity destabilizes the entire reentry process."

Instead of reentering society to a safe and stable home, formerly incarcerated people frequently turn to the shelter system. A 2017 report from the Department of Housing and Urban Development found that approximately 50,000 people released from prison entered shelters directly after the end of their sentences. In New York City, the Coalition for the Homeless found that "The lack of housing for individuals released from State prisons is the largest contributor to homelessness among formerly institutionalized populations." And the numbers are stark: From 2015 to 2018, the state directed at least 15,000 formerly incarcerated people to city-run shelters.

Even then, "shelters don’t allow residents to develop a sense of permanency — and it’s permanency that helps people get a job or stay sober, as numerous studies have indicated," as The Atlantic reported in 2016. Moreover, "People often have to leave food and other belongings behind when they check into a shelter, making it hard to accumulate anything of sentimental or material value."

Some shelters limit the amount of time an individual can receive support, meaning that formerly incarcerated people might also need to move between different housing situations. After the onset of coronavirus, some shelters sought to limit the number of available beds to limit the potential spread of COVID-19, an important public health step but another limitation on resources available to those who are struggling.

Another cause and effect of homelessness and incarceration is a lack of employment opportunities. After all, it's hard to be employed while suffering from homelessness. Having access to a good night's sleep, a shower, and transportation to work are all critical for holding down a job — but all of that can be difficult for those trying to survive without safe and stable housing.

Homelessness rates are highest for those who are chronically under-resourced in other areas of American life, such as Black women. "The high rates of homelessness among Black women are especially striking in light of our similar finding, last month, that unemployment rates among formerly incarcerated Black women were higher than any other demographic group," the Prison Policy Initiative stated in its report.

On the other hand, even if someone has access to temporary or long term shelter post-incarceration, they may face employers who won't hire someone with a criminal conviction. And employers that do hire those with convictions may not offer livable wages or benefits that can help someone stabilize after returning home. A Brennan Center for Justice study found that formerly incarcerated people earn approximately 52% less than their peers after they return home; for those with felony convictions, it's 22% less. Stable housing is the key to securing employment and health care coverage, and can lead to greater mental health outcomes. In other words, access to housing is its own preventative health care, job support, means of social stability and security, and means for building wealth.

Because of the connections among housing, employment, and incarceration, advocates say that guaranteeing housing for those who need it is an effective way to address many problems with one policy solution. In fact, according to Urban Institute, offering stable and safe housing is the only proven strategy for addressing the reactionary incarceration strategy of those who suffer from homelessness. And some cities have demonstrated what successful housing first models look like; it's not just a pie-in-the-sky policy idea. For example, in Utah, a housing-first policy strategy reduced the number of people suffering from chronic homelessness from 1,932 in 2005 to near zero ten years later. Imagine the impact if such changes were made on a national scale.

More like this
These organizers are fighting to make sure non-English speakers get vaccinated, too
By Vanessa Taylor
When the pandemic hit, Black Americans embraced a sacred tradition of food sustainability
By Vanessa Taylor
The Chauvin trial is incapable of delivering real justice
By Vanessa Taylor
Stay up to date