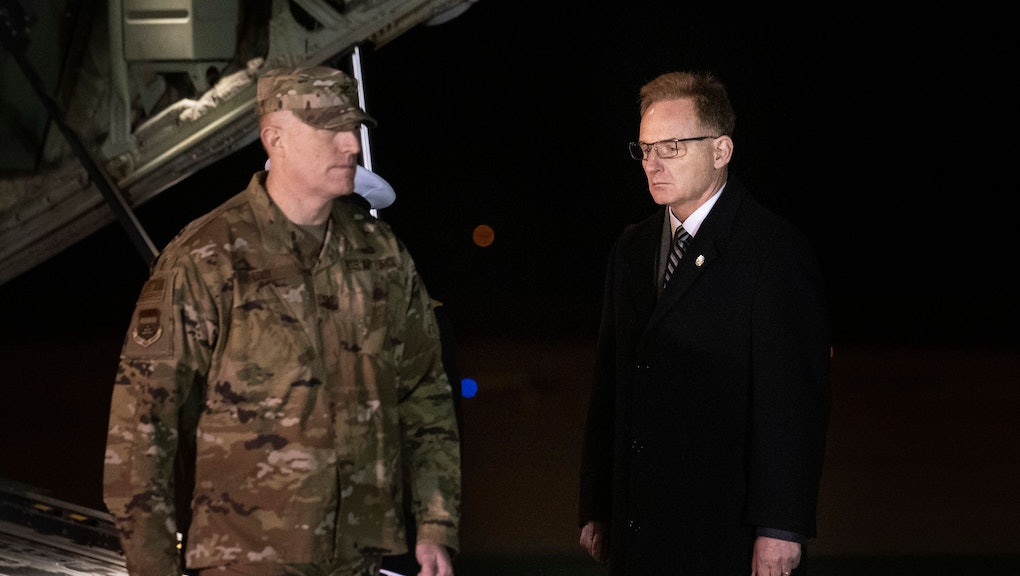 Last week, Acting Secretary of the Navy Thomas Modly fired Brett Crozier, captain of the vessel USS Theodore Roosevelt, after the captain wrote a letter to Navy admirals pleading for help with a coronavirus outbreak on board. On Sunday night, Modly gave a speech to the crew of the aircraft carrier — and rather than offering words of consolation for the sailors, Modly took the opportunity to deliver an angry speech blasting Crozier as “naive” and “stupid.”

In particular, Modly accused Crozier — who is currently quarantined after becoming infected with the virus himself — of a “betrayal” by sending the letter. Crozier sent the letter to military officials but it was eventually reported on by The San Francisco Chronicle, thrusting it into the national sphere. “It was a betrayal. And I can tell you one other thing: Because he did that, he put it in the public's forum, and it is now a big controversy in Washington, D.C.," Modly said in audio obtained by several outlets and reported on Monday.

The gist of his speech, which was broadcasted over the ship’s PA system, was that the captain is to blame for the letter leaking to the public. "If he didn't think, in my opinion, that this information wasn't going to get out to the public, in this day and information age that we live in, then he was either ... too naive or too stupid to be a commanding officer of a ship like this," Modly said of Crozier. "The alternative is that he did this on purpose."

In the letter, Crozier explained that continuing to quarantine sailors on the ship would put his entire crew at risk. “We are not at war. Sailors do not need to die. If we do not act now, we are failing to properly take care of our most trusted asset: our sailors," Crozier wrote. As of Monday, 173 sailors aboard the Theodore Roosevelt have tested positive for coronavirus. Two thousand others have been evacuated to Guam.

After audio of Modly’s speech leaked Monday morning, he offered a statement saying that "the spoken words were from the heart."

"I stand by every word I said, even, regrettably, any profanity that may have been used for emphasis," he continued. "Anyone who has served on a Navy ship would understand. I ask, but don't expect, that people read [the remarks] in their entirety."

Bizarrely, the Navy apparently tried to deny Modly had said what he said, even after the audio of his speech was published.

Several lawmakers have pushed back against Modly’s aggressive speech and called for his removal. Virginia Sen. Tim Kaine said in a statement that his words were "completely inappropriate and beneath the office of the Secretary of the Navy. .... These dedicated sailors deserve better from their leadership." Another defense official, speaking anonymously with CNN, told the outlet that Modly should be fired, saying, "I don't know how he survives this day."