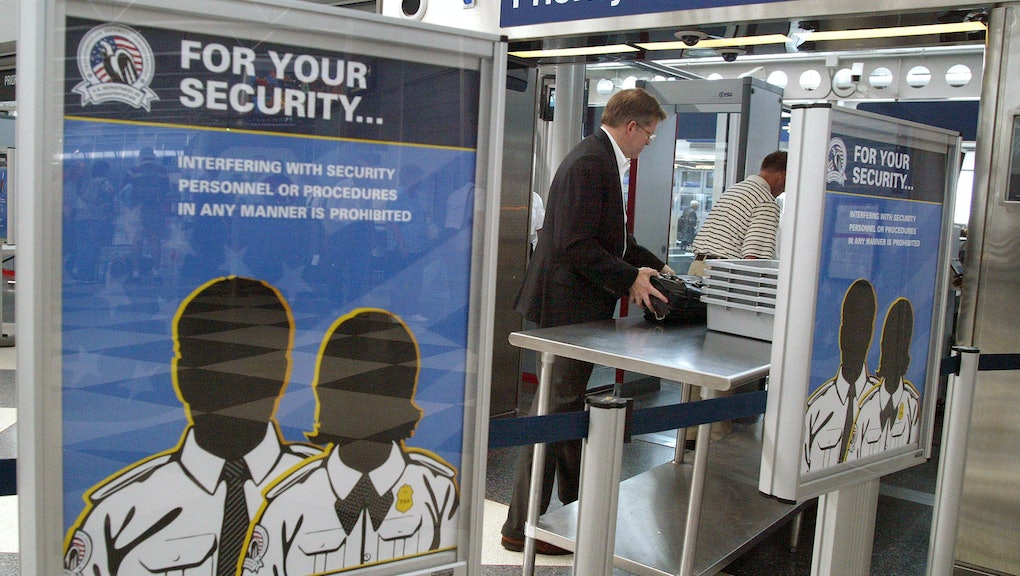 A traveler passes through a priority checkpoint at O'Hare International Airport in Chicago on Sept. 10, 2002. [Photo by Tim Boyle/Getty Images]

After 9/11, the U.S. leaned into security theater. Here's how that's playing out 20 years later

On Sept. 11, 2001, the United States experienced the deadliest terrorist attacks in its history, leaving nearly 3,000 dead. In the immediate aftermath, then-President George W. Bush assured the nation that the attacks "cannot touch the foundation of America," adding, "This is a day when all Americans from every walk of life unite in our resolve for justice and freedom."

What Bush left unsaid in that initial address was what, exactly, the U.S. would unite against. As Bush began his War on Terror abroad that has resulted in 900,000 deaths, per one recent estimate, communities within the U.S. were targeted, too. In the week after 9/11, three people were killed due to Islamophobia: Balbir Singh Sodhi, a Sikh man who was mistaken as Muslim, in Arizona; and Waqar Hasan and Vasudev Patel in Texas, whose shooter said he killed them to "avenge" the U.S.

Overall, Islamophobia flourished post-9/11, with the number of reported hate crimes jumping from 28 in 2000 to 481 in 2001. However, focusing on Islamophobia at an interpersonal level obscures how the federal government has built on centuries of white supremacy and anti-Black Islamophobia to target Muslim communities through every avenue. Let's take a look at some of the post-9/11 policies that have drastically reshaped the U.S over the last 20 years.

The Department of Homeland Security

Before 9/11, Muslims in the U.S. were mostly associated with Black people. Thanks to documentaries like 1959's The Hate That Hate Produced, Black Muslims were seen as domestic radicals, and thus often targeted by agencies like the Federal Bureau of Investigation.

So, the post-9/11 view of all Muslims as terrorists wasn't really new. However, the shift from being seen as a domestic to a largely foreign threat was. To address this new "threat," Bush used the Homeland Security Act of 2002 to bring 22 different agencies together as the Department of Homeland Security. Five years later, Bush would sign the 9/11 Commission Act, which gave $300 million to DHS to create "anti-terrorism" fusion centers among state, local, and federal law enforcement agencies that would later become instrumental in political repression of Standing Rock activists and more.

Since its inception, DHS has grown to be the third-largest Cabinet department with more than 240,000 employees and an annual budget over $500 billion. In recent years, DHS has funded Muslim surveillance programming like Countering Violent Extremism — rebranded as the Center for Prevention Programs and Partnerships under President Biden. DHS has numerous sub-agencies — like FEMA and the TSA — but perhaps its most infamous are the U.S. Immigration and Customs Enforcement, and Customs and Border Protection.

Xenophobia has always played a huge role in the United States. You don't need to look further than the Chinese Exclusion Act of 1882 or the National Origins Act of 1924. However, Bush's reorganization of DHS and the post-9/11 wars led to the increased militarization of law enforcement and immigration agencies.

As a department, ICE claims its mission is to "protect" the U.S. from illegal immigration and crime. Similarly, CBP says its job is to protect the U.S. by "preventing terrorists and [terrorist] weapons ... from entering the United States."

Both agencies have seen massive growth since their formation; ICE's annual budget has grown by 85% since 2003. According to the American Immigration Council, ICE and CBP employ over 84,000 people, which includes 50,000 border and interior enforcement officers.

In recent years, the documentation of immigration abuses like alleged forced hysterectomies, Muslim detainees being fed pork, and the deaths of migrant children have led to increased demands to abolish ICE and CBP.

But along with the formation of federal agencies like DHS or its sub-agencies ICE and CBP, politicians in the post-9/11 aftermath passed individual laws that have had lingering effects on the U.S. Take, for example, the Patriot Act.

In October 2001, Congress passed the Uniting and Strengthening America by Providing Appropriate Tools Required to Intercept and Obstruct Terrorism Act. Yes, that's a very long-winded title but, basically, it was an "overnight revision of the nation's surveillance laws", per the ACLU.

Now, as noted by Vox, the Patriot Act itself is huge, so not everything within it is about surveillance. However, the ACLU reported that the Patriot Act essentially granted a "wish list" from law enforcement that Congress had previously rejected in pre-9/11 sessions.

The Patriot Act made life hell for many Muslims. In 2001, the Institute for Social Policy and Understanding called it a "major blow to the Constitution," noting, "The problem with the administration's rationale is once the government successfully constructs an enemy group, it can justify detentions without charge, physical abuse, and other drastic means of waging war against the enemy." According to the ISPU, Muslims faced abuse and harassment that included airport profiling, physical assaults, and other injustices due to the "misapplication" or the law.

Back in 2017, then-President Donald Trump's infamous travel ban on Muslim-majority countries went into effect. While some were confused about how a ban like that could even come into place, others pointed out its resemblance to the National Security Entry-Exit Registration System.

In short, NSEERS created a registry of non-citizens from 25 countries based on religion, ethnicity, and national origin. Not only did NSEERS require that non-citizens register when they enter the U.S. — which involved fingerprinting, having their photo taken, and being interrogated — but they had to check in with immigration officials too.

Like Trump's travel ban, NSEERS never explicitly said it was going after Muslims. When it comes to U.S. policy, though, you have to be good at reading between the lines. As noted by CNN, only one of the countries targeted by Trump wasn't majority Muslim (North Korea). Similarly, NSEERS tracked non-citizens from Afghanistan, Algeria, Bahrain, Bangladesh, Egypt, Eritrea, Indonesia, Iran, Iraq, Jordan, Kuwait, Lebanon, Libya, Morocco, Oman, Pakistan, Qatar, Saudi Arabia, Somalia, Sudan, Syria, Tunisia, United Arab Emirates, and Yemen. You can connect the dots there.

Although NSEERS was discontinued in 2011, it had a disastrous impact in a short amount of time. In 2012, a report from the Penn State Law and Rights Working Group found that over 80,000 people were registered and monitored by the program. Of those, over 13,000 were placed in deportation proceedings.

Surveillance of Muslims in the U.S. wasn't a post-9/11 invention. But it certainly boomed after the attacks. Every single agency or law that I mentioned on this list included surveillance in some form, and not even that captures the whole picture.

The post-9/11 era saw the proliferation of security theater — security measures that look like they're doing a lot when, in reality, not much is being achieved. There's perhaps no better example than the TSA, which was created in November 2001. The fact that some passengers can get on the plane without even taking their shoes off while others are subjected to rigorous checks of their hair, hijab, and genitals should clue you into how much of a performance the TSA is.

Beyond the TSA, the surveillance industry as a whole saw massive growth. In 2013, The Washington Post obtained a "black budget" report from Edward Snowden that detailed the workings of 16 intelligence agencies and over 107,000 employees across the U.S. The total amount of the budget? $52.6 billion.

More like this
Live from New York: Revisiting the totally bonkers era of post-9/11 'SNL'
By Rafi Schwartz
How the shock and confusion of 9/11 enabled our modern conspiracy era
By AJ Dellinger
Vaccines are good. Threatening to evict someone over them is not
By Rafi Schwartz
Stay up to date