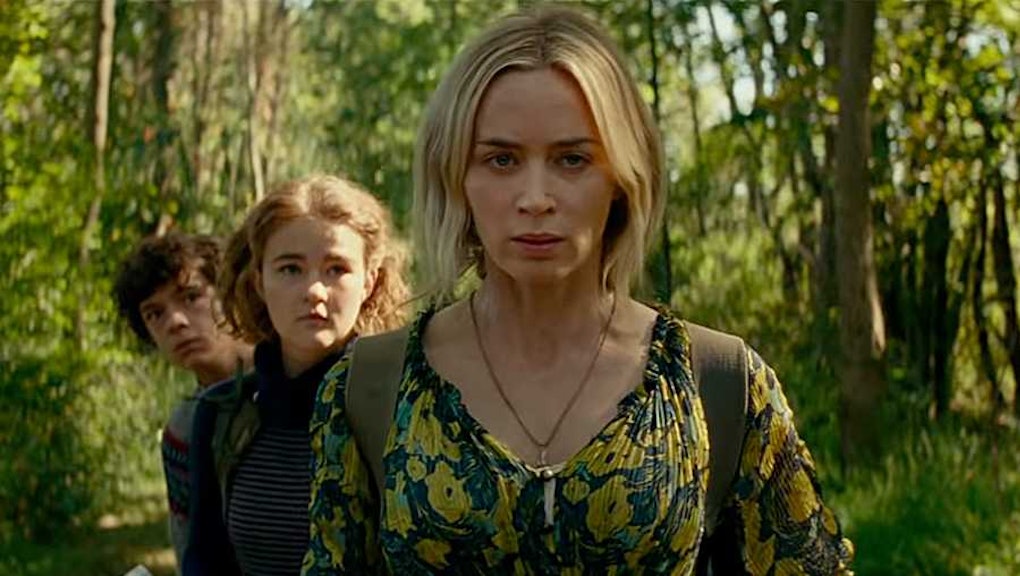 After a pandemic, the isolation of 'A Quiet Place II' feels startlingly relatable

In the post-apocalyptic world of John Krasinski’s A Quiet Place Part II, all it takes to trigger a giant, spider-like creature is the faintest of noises — a cough, a sneeze, a leaf crunching underfoot. And as I walked into a theater screening of the film, it felt like the audience was part of the fictional world, too. There are no quiet murmurs, no phones going off, not even the innocent rustle of a popcorn bag — just a blanket of anticipatory silence.

Last weekend’s theatrical release of the long-awaited sequel to Paramount’s 2018 thriller A Quiet Place comes more than a year after the pandemic forced theaters around the world to shut down. In 2020, the global box office fell a staggering 72 percent, but now, with the recent uptick of vaccinations and distribution, cinemas across the country are slowly reopening. And while A Quiet Place Part II’s initial release was scheduled for last spring, its Memorial Day weekend debut couldn’t have come at a better time. With its unpredictable jump scares, terrifically convincing performances, and seamlessly integrated plot lines, A Quiet Place II’s best qualities are meant to shine on the big screen. And even as someone who can count the number of horror films I’ve seen on one hand, A Quiet Place II was the perfect film to mark the resurrection of my movie-going experience — not only due to the familiarity of the sequel’s premise and characters, but also because the film’s powerful hold on a room full of strangers curates something the pandemic has made difficult to replicate: a sense of community.

Much like A Quiet Place, A Quiet Place Part II revolves around the Abbott family’s survival in a world overrun by blind monsters with acute hearing. But before placing us into the Abbott family’s world as we know it, the film opens with a flashback of the day that creatures first came to the town of Millbrook. The father, Lee Abbott (John Krasinki), is on his way to his son Marcus’s Little League game, and as he pops a squat on the stand, he is greeted by his wife Evelyn (Emily Blunt), his friend Emmett (Cillian Murphy), and his daughter, Regan (Millicent Simmonds), who is deaf.

The film strategically curates a soothing sense of normalcy and then, just when you begin to let your guard down — BOOM — big-toothed alien creatures are ruthlessly tearing through buildings, flipping cars upside down, and violently grabbing panicked people desperately running for shelter. Little does the Abbott family know, this is their new normal, and the film soon cuts to a title card that reads, “Day 474,” bringing us into the present, where most of human-life has been destroyed — a follow-up both to the prologue and first film, which drops the viewer immediately into this post-apocalyptic world with no explanation.

Although in A Quiet Place II, Evelyn and her kids seek refuge in an abandoned factory as opposed to a farm, and the film’s plot presents different challenges for the Abbott family (for example, a world with a newborn baby but without Lee and their youngest son Beau, who were killed in the first film), its premise largely remains the same. And the familiarity of watching a sequel, whose initial installment premiered more than three years before the pandemic, makes the return to theaters all the more comforting. In film time, we’ve only missed a few hours, as Day 474 marks the morning after A Quiet Place’s closing scene. The terrifying dystopia of A Quiet Place II continues, and now, it feels startlingly close to the world that we had to learn to grapple with in the past year. While the characters have to tiptoe and live silently, the pandemic forced us to live much more cautiously as well: staying glued to CDC documentation that told us to avoid social gatherings and to only leave to get essential supplies, maintaining social distance when we were outside, wearing masks to protect our faces, being even more cognizant of washing our hands and wiping down items before using them. We lived our own dystopia as well over the past year and change. And during the film's hour and 37-minute run-time, we are convinced that we were in theaters just yesterday — and now, understanding the Abbott family’s survivalist mentality is not too far from our reach. The safest way to protect yourself and others is to isolate, because any attempt to venture outside, even out of necessity, could come at a grave cost.

Even for those who have never watched A Quiet Place, its sequel remains strong as a stand-alone film. A rarity for many horror movies, Krasinski masterfully attaches distinctive qualities to characters you want to invest in — whether it's Evelyn’s fearlessness, Regan’s determination to carry out her father’s legacy, Marcus’s boyish naivety, or Emmett’s deep empathy. Each character is not without flaws, but their blindspots are believable — and the plot is driven by much more than easily avoidable mistakes that viewers can see coming from miles away. Krasinski tightly wounds suspense throughout the film, not through cheap scares or unpleasant imagery, but with careful and subtle control of sound design and visual cues. As exemplified in an early scene where Marcus’ foot gets caught in a bear trap, a barefooted step off the beaten path could be the difference between life and death, and such an attention to detail is mirrored in the film’s cinematography — which becomes all the more fraught when enlarged on screen. By the end, we are able to identify a character down to the way they hesitantly tiptoe through their fragile world.

After more than a year of watching films almost exclusively on a laptop or TV in the comfort of our own homes, going to the movies has become almost a foreign concept. But the theatrical release of A Quiet Place II reminds us that films are best when they are shared, and even after a lengthy and uncertain hiatus, the joyful novelties of movie-going are not lost. And although over this past year we’ve all had to hold our breaths for the sake of safety, when A Quiet Place II demands it, we eagerly listen.

More like this
Live from New York: Revisiting the totally bonkers era of post-9/11 'SNL'
By Rafi Schwartz
The bittersweet success of 'Shang-Chi' after a year of pandemic-fueled Asian hate
By Brandon Yu
We learned collective grief from 9/11. We could really use those coping skills right now
By Melissa Pandika
Stay up to date