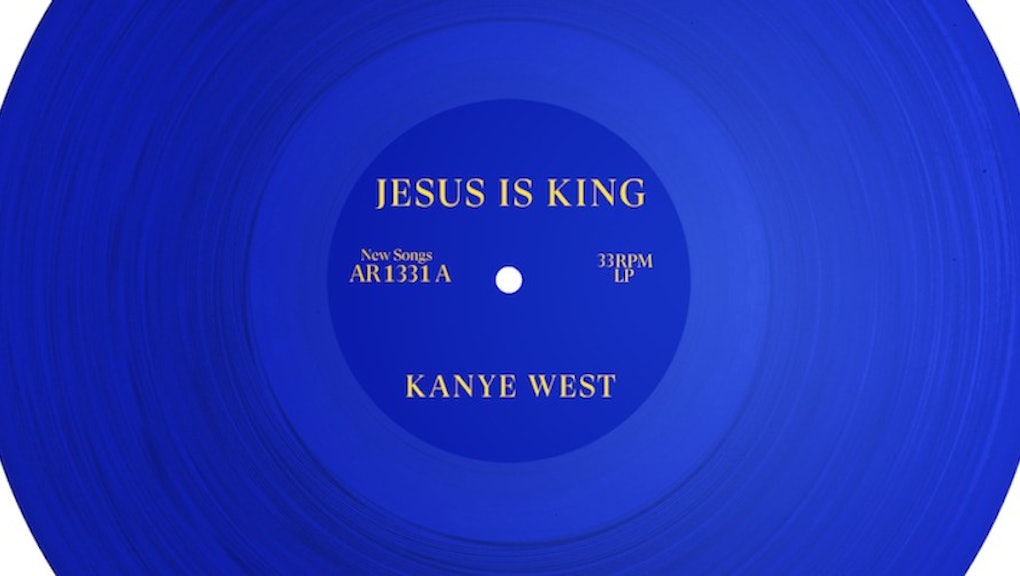 One afternoon, in June 2013, Kanye West was wandering through a Rick Owens exhibit in Basel, Switzerland, when he decided to throw a listening party. He sent a few cryptic emails and booked a yawning gallery space in the Messeplatz, five minutes from the Rhine. Tuxedos and sample-size gowns filed in. This was the week before Yeezus and you can imagine a lot of polite smiling during the long tangents about fucking Hamptons spouses. Alone on stage, West gave one of the more compelling monologues in a long life of them. He recalled his time in art school. He admitted, sheepishly, that he knew his ceiling as a visual artist would be a desk job at an ad agency. “I wanted to make something of impact,” he said. “I found that when I would drop samples, my friends would react to it more. I felt that I had a real talent in chopping and appropriating music.”

He continued. “I know this is obvious what I’m going to say, because I’m a black guy so I’m gonna name ‘the most obvious artist in the world’ —Warhol — but it’s very similar to the way Warhol would appropriate a Campbell’s Soup can, the way I would sonically appropriate a Ray Charles sample or a Michael Jackson sample.” He talked about rappers being barred from fashion shows and called himself a “very commercial celebrity boyfriend.” He railed against the ugliness of the YouTube interface and the paparazzos who would ask him “dumbass shit” while he was dreaming up ways to better the world. He kept returning to the idea of “a usable form of art.” The Owens furniture, high fashion at terrestrial prices, a reliable club song. This was back when West, along with the public and a fawning tech press, was enamored with the notion of “design” as a social good. With the notion of perpetual tweaks as part of the work itself. When he was finally ready to play Yeezus for the Swiss bourgeoisie, he tapped the spacebar on a custom, matte-black Macbook.

If you’re reading this you are certainly aware that West has spent the last two years associating with and espousing the virtues of the dumbest people on the planet: 19-year-olds with flag emojis in their Twitter bios, the founders of Twitter, Candace Owens, the president, the kinds of people who like to remind you that Abraham Lincoln was a Republican, Tekashi 6ix9ine, the founders of Snapchat, the bankers who wear the same watch as him. He mugs in the JP Morgan Chase lobby. He tells Meek Mill that he can’t possibly care about prison reform if he keeps rapping the way he does.

You’re also likely aware that West’s new album, Jesus Is King, was teased as a turn away from the secular world and toward God. You’ve heard of his Sunday Services, where an excellent choir in West’s employ sings church standards and adapted-for-Christ versions of pop songs. At first these were private, held near his home in Hidden Hills, available to the public only via the Instagram stories of attendees. Then came the ticketed pop-ups, places to praise the Lord and buy $50 socks. The hard pivot (from last year’s atrocious ye and the songs that came after it) was met with some skepticism; the most salacious rumors suggested that the new direction, coupled with the purchase of a massive plot of land in Wyoming, were part of a church/cult/tax evasion situation. Some have pushed back, noting that when West was shopping for a record contract in 2002, he played executives his demo of a song called “Jesus Walks,” suggesting that this kind of faith in God has been central to his creative identity all along. Of course, those modes — scamming and sincere — are not mutually exclusive.

Jesus Is King is not a gospel record per se, but it features the Sunday Service choir in several prominent spots and samples at least one other church group; it chops up old songs of praise and brings in organs where appropriate. The primary subject, as always, is Kanye West, but God is a very close second. Listening to it over the past several days, I return to West’s comments in Basel. The types of appropriation he cited there — Warhol with the soup cans, etc.— are not just about the practical or aesthetic use an artist can make of the sampled material, but the baggage the audience has with whatever’s being sampled. When West describes his early forays into production, he doesn’t recall digging for obscure source material; he remembers his friends’ faces lighting up when they recognized a Ray Charles sample. What’s most striking about Jesus Is King is that West himself finally functions the same way. His presence on a song is, itself, part of its strangeness. He is not simply a vocalist singing about God — he is the man from the Trump videos and the Katrina fundraisers, the one with his wife on television and his mother on airbrushed shirts, with the Benz and the backpack and the debt and the kilts, and the music is no longer the center of his public life, anchoring everything else, but rather one in a web of ventures. He is a piece to be manipulated, like brushed steel or raw denim or “I Want You Back.” While he’s been trending in this direction for some time now, never before has so much of a Kanye West album’s heavy lifting happened outside the text.

As mentioned, the album is almost entirely about West’s faith, but more specifically about broad, immediately digestible Christian themes. Its songs do not feature the tortured, maybe-lapsed religiosity that has marked nearly all of West’s work. He is no longer grinning and asking his reverend if he can go to strip clubs “if my tips help send a pretty girl through school” or having anal sex on a song called “Father Stretch My Hands,” or even mulling the ethics of wearing Ghanaian gold. This change slackens some of the most interesting tension in West’s writing. He raps ill-considered, lazy lyrics in vocal takes that range from competent to grating and/or narcotized (his endearingly off-key singing is, as always, effective). A generous reading would suggest that this is merely the next step in a catalog that has made lyrics less and less central to each song’s success; a more critical one would pair these with his public comments of late and flash to images of America’s ugliest religious zealots.

What’s more successful are the experiments in production and texture. After a Westless intro, “Selah” begins the album in earnest, arriving around 45 seconds at the following passage: “Won’t be in bondage to any man / John 8:33 / We the descendents of Abraham / Ye should be made free,” where giant drums pound on “be,” “made,” and “free.” These are the first drums you hear on the album. By the end of that verse, his voice sounds as if it might get swallowed in the mix any second. Some songs don’t have any drums at all: see the despairing “Hands On” or “Use This Gospel,” which reunites the Clipse (how’s that for metatext) and pushes all its drum programming to the coda. “Closed On Sunday” nearly makes up for its frustratingly stupid conceit with its cautious, minor-key creep; the all-encompassing warmth of Ty Dolla $ign’s vocals on “Everything We Need” does its best to drown out shit like “What if Eve made apple juice?”

Never before has so much of a Kanye West album’s heavy lifting happened outside the text.

The opening cut on Yeezus, a Daft Punk collaboration called “On Sight,” is designed as a shock to the system. Part of the song’s internal logic is that it knows this: in between “We gon’ get this bitch shaking like Parkinson's” and “No sports bra, let’s keep it bouncing,” West stops the song cold and inserts a 13-second clip of the Holy Name of Mary Choral Family singing “Oh, He’ll give us what we need / it may not be what.” Yeezus leads the listener out into the wilderness before delivering her to “Bound 2”: a celebration and reprieve. The first time West appears on his new album, he attempts to set up the same dynamic. “Everybody wanted Yandhi,” he raps, referring to the scrapped, secular album he had teased and for which he assumes (perhaps too eagerly) there was a ravenous hunger. “Then Jesus Christ did the laundry.”

But Jesus Is King is the inverse of Yeezus: it starts with the familiar and attempts to unnerve slowly, like dropping a lobster into a lukewarm pot before turning on the heat. Musically, it achieves this effect at a couple of different points; in the writing, almost never. It feels more like a finished, considered work than ye or 2016’s The Life of Pablo, but does not have the latter’s deep, agonizing anxiety. It is musically coherent and thematically rote, a worthy counterweight to expensive shoes.