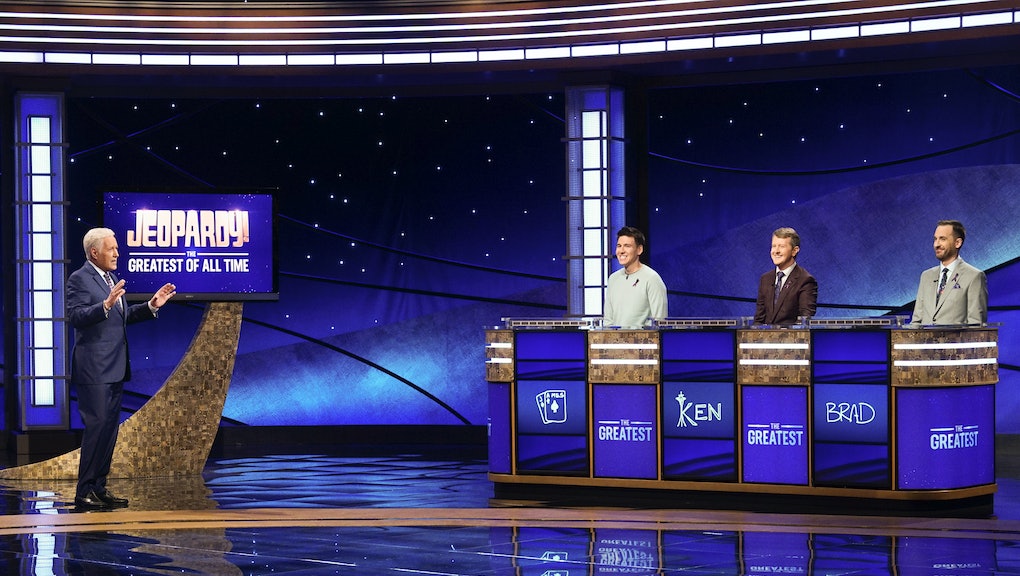 Alex Trebek is the true #JeopardyGOAT

Last night around 7pm, I found myself channel surfing. Not scrolling through Netflix. Channel surfing, through the 20-or-so local stations my parents get at their house in the Midwest, where I’m visiting.

It’s a familiar and soothing routine. It takes me back to my high school days, when we still got a weekly TV guide delivered with the Sunday newspaper. I mentioned those paper TV guides to my mom, while Googling the local station lineup on my phone… How long had it been since they’d been around the house? Somewhere between a decade and two?

Back to the channel surfing. My mom commandeered the remote and briefly paused on ABC. Jeopardy! was just starting. Yes. Cozy. Perfect.

Then she moved on to local news coverage of Iran bombing US military bases in Iraq. Trump was talking, and it was the opposite of cozy. I plead with my mom to please go back to Jeopardy! There’s too much Trump in the world right now. We needed Alex Trebek.

She flipped back to ABC. On TV, Trebek was introducing the three all-star contestants vying for the title of “Greatest of All Time.” The primetime tournament is a matchup of the three biggest winners in Jeopardy! history: Ken Jennings, whose 74-game winning streak in 2004 has never been beat; James Holzauer, who holds the record for highest payday in a single game ($131,127); and Brad Rutter, who’s earned the most money playing Jeopardy! overall — $4 million total. Whoever wins three double-headers first takes home the title. To my amusement, the hashtag #JeopardyGOAT flashed onscreen from time to time.

The nerdy male whiteness on TV was nearly blinding. But the first round whizzed by, and the dudes didn’t miss a single clue. Jennings and Holzauer were neck and neck from the start, and a whole hour of Jeopardy! flew by like I’d been watching Succession. In the end, the 2004 longtime champ squeaked past the 2019 betting whiz. Jennings won the first night with a combined total of $63,400, just $200 ahead of Holzauer’s $63,200. Poor Rutter bet everything he had on the second Final Jeopardy and got it wrong, leaving him with a meager $10,400 from his first game in the end.

Somewhere along the way, I started to wonder whether #JeopardyGOAT was a sneaky way to give Trebek a grand sendoff, without making a big thing of it. All the contestants wore purple ribbons, in support of pancreatic cancer research and the host’s recent health struggle. Trebek shared he was diagnosed with stage four of the disease in a video last March. In it, he joked he had no choice but to beat pancreatic cancer, "because under the terms of my contract, I have to host Jeopardy! for three more years."

Trebek kept taping Jeopardy! all spring while undergoing chemotherapy, including during Holzauer’s winning streak. In an interview with CBS Sunday Morning in May, he described summoning the strength to keep working, even when crippling stomach pain left him writhing on the floor of his dressing room between tapings.

In early summer, Trebek’s prognosis was looking good. The chemo seemed to have worked. But follow-up immunotherapy did “diddly squat,” Trebek said, and he learned he’d need another round of treatment in the fall. He still returned to work hosting Jeopardy! in late August.

In early October, Trebek did an interview with Canadian network CTV News and reflected on his mortality. “I’m not afraid of dying,” he said. “I’ve lived a good life, a full life, and I’m nearing the end of that life […] if it happens, why should I be afraid of that?”

Just before the new year, Trebek sat down with ABC News and opened up further: “I have learned something in the past year and it’s this: We don’t know when we’re going to die,” he said. “Because of the cancer diagnosis, it’s no longer an open-ended life, it’s a closed-ended life because of the terrible [...] survival rates of pancreatic cancer.”

Pancreatic cancer is truly vicious. Only 9% of patients diagnosed with stage four, like Trebek, live another five years. The disease killed my great-uncle in about a week a decade ago. It also claimed the life of my great-aunt in a month a few years ago. They were two of the most energetic, vivacious people I’d ever known — a lot like Trebek.

The Jeopardy! host also spoke with ABC News about his inevitable exit from the show. Trebek said he’d stay on “as long as my skills have not diminished,” but acknowledged the process had already begun. He was cagey about when his last day would be, but said he already knows what he’ll say when the time comes.

“It’ll be a significant moment for me,” he said. “But I’ve kind of, in my mind, rehearsed it already, and what I would do on that day is tell the director, ‘Time the show down to leave me 30 seconds at the end. That’s all I want.’ And I will say my goodbyes and I will tell people, ‘Don’t ask me who’s going to replace me because I have no say whatsoever. But I’m sure that if you give them the same love and attention and respect that you have shown me...then they will be a success and the show will continue being a success. And until we meet again, God bless you and goodbye.” I’m not crying, you’re crying.

Trebek’s cancer battle isn’t particularly unique. But the pain and discomfort of watching him approach death is certainly amplified by the fact that he’s a beloved TV personality. Trebek’s voice and visage is beamed into homes every night, and for a lot of people, he’s a beloved teacher figure — sort of like the Rupert Giles of Jeopardy! — nudging his contestants towards brilliance and gently chastising them when they get it wrong.

The battle to be named “Greatest of All Time” will wage on for the rest of this week, perhaps into next. Trebek might announce his retirement at the end of it. The network certainly wanted to sneak in a last big tournament before the beloved host does decide to leave. But in my book, the title has already been won. The #JeopardyGOAT couldn’t possibly be anyone other than Alex Trebek.