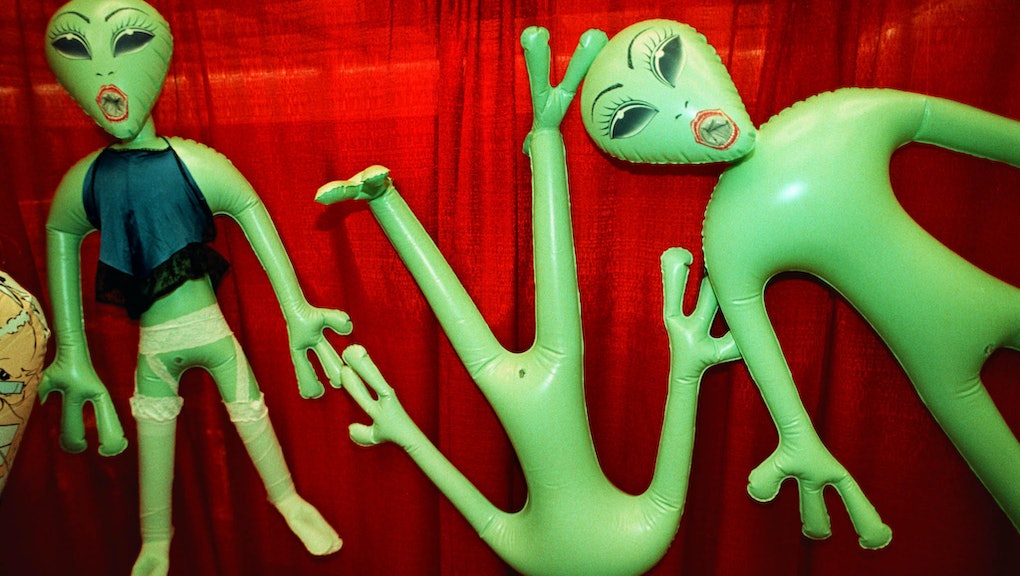 “Getting turned on by aliens falls under ‘Exophilia,’ which means that a person is aroused by supernatural, extraterrestrial, mystical, robotic, or any other type of non-human being,” says Carlos Cavazos, a psychotherapist who specializes in working with sexual minorities and host of AskCarlos, a YouTube channel that offers psychology-based sex advice. Cavazos explains that while some people might just fantasize about things that are taboo in general, others have more specific E.T.-related kinks. “Some people like the thought of being abducted, probed, or of being treated as a sexual guinea pig by extraterrestrials,” he says. Others just might be that into sci-fi.

The truth is, though it may seem novel, exophilia is nothing new or particularly bizarre. There are early 19th century, woodblock prints from Japan that depict women being ravished by tentacled creatures and Octavia Butler’s book from 2000, Lilith’s Brood, has some famously titillating alien sex scenes. Also, folks have been getting off on Jane Fonda’s portrayal of super hot cosmic babe Barbarella since 1968. “Intergalactic sex is a legitimate kink,” Cavazos says. We’ve always been into aliens, or at least otherworldly sexual delights, it’s just that now we are more able to access these desires with a simple search.

“There is so much going on in alien porn to begin with. When you add a helpless victim and violent themes, it can be way too much. But remove the alien themes, costumes and bizarre sets, and you are left with a typical rape fantasy scene,” Cavazos explains. “The rape fantasy, which is surprisingly popular among women, is in a way, at the core of many alien sex fantasies due to the very nature of alien ‘abductions.’ It’s something done against your will,” Cavavos says. Although it may seem distasteful to some, recent research found that 62% of women self report as having rape fantasies.

More like this
What is sploshing, the food fetish that's taking over TikTok?
By Melissa Pandika
California could ban nonconsensual condom removal. Why isn't this already illegal?
By Melissa Pandika
Delta might be the last COVID nightmare variant we get
By Ian Kumamoto
Stay up to date