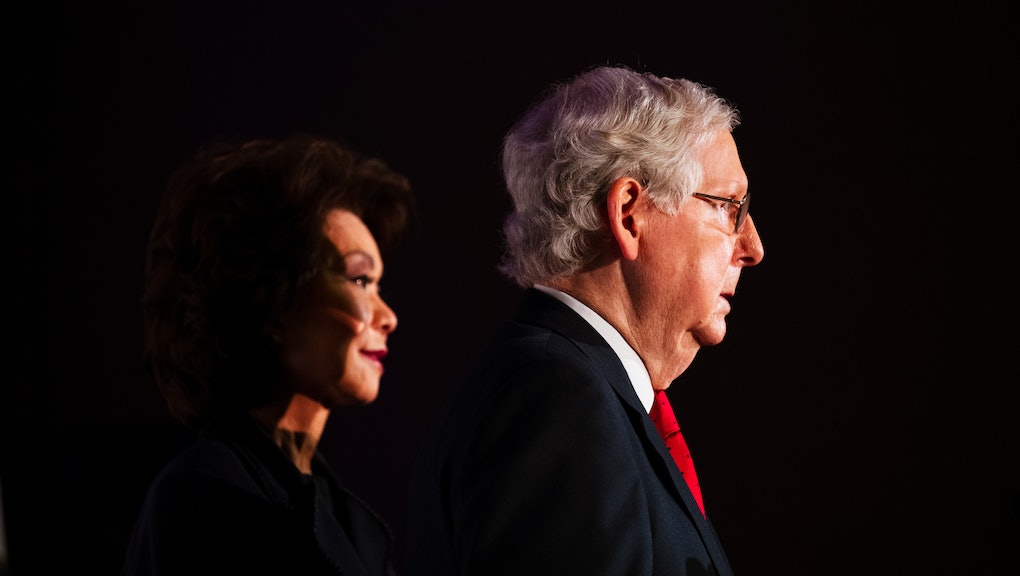 All the fervent Trumpists trying to distance themselves now is too little, too late

Death and taxes. Those are supposed to be the two constants in life, right? But if Wednesday's attempted coup against Congress by a mob of insurrectionists inspired by President Trump has shown us anything, it's that there's a third universal truism to add to the list: naked self-preservation.

In the wake of what can best be described as a fascist attempt to overthrow Congress (albeit a haphazard and unsuccessful one, at least so far) there has been a steady stream of Republican lawmakers, conservative notables, and Trump administration figures who are suddenly shocked — shocked! — to discover that the president has been fomenting racist violence for his own personal gains. Quelle surprise!

The list of suddenly remorseful Trump enablers is long, and growing longer. The names therein are hardly surprising: former chiefs of staff, secretaries of defense, top advisers, etc. They're worth naming not for their courage, but only so that they live the rest of their lives marked with the indelible stain of having helped put an obviously unfit demagogue in a position to do what he always said he was going to do.

Take former attorney general and erstwhile Trump consigliere Bill Barr, arguably the most influentially destructive figure of the past four years outside of Trump himself. In his time as AG, Barr helped shield Trump from Special Counsel Robert Mueller's investigation into the 2016 election, helped spearhead the administration's disastrous legal response to the COVID-19 pandemic, and essentially acted as the president's personal attorney, to the detriment of both the Department of Justice and the country as a whole. But now, after watching Trump-inspired rioters breach and then rampage through the Capitol, Barr has suddenly decided that the president's most recent actions were "inexcusable" and a "betrayal of his office and supporters."

It's hard to see Barr's newfound sense of righteous indignation as anything other than a desperate last-minute attempt to surreptitiously place himself on the right side of history, after having spent so much time propping up the very person he suddenly wants you to think he's so appalled by.

Like Barr, Trump's former chief of staff Mick Mulvaney — a man who has had not one, or two, or three, but FOUR jobs within the Trump administration — has suddenly, and very publicly, grown something resembling a spine. "I just can’t do it. I can’t stay," Mulvaney claimed he told Secretary of State Mike Pompeo, when he quit his position as special envoy to Ireland after Wednesday's coup attempt. "The president of the United States went on stage and said, 'Go march down the street and invade the Capitol,' and they did," he continued.

Surely, the fact that Mulvaney once was so committed to safeguarding the president that he defied a congressional subpoena that could have contributed to the impeachment and removal of Trump from office, had no part in giving Trump the impression that he had the ability — nay, the imperative — to weaponize a mob for the sole purpose of personal score-settling and power accumulation.

Really, Mick? Either you're incredibly naive, incredibly stupid, or — and this is my guess here — you're so desperate to cover your own ass that you're willing to pretend that you're that naive and dim in hopes of obfuscating the fact that you spent four years helping the president amass the influence he unleashed in Washington on Wednesday.

Transportation Secretary Elaine Chao, meanwhile, ignominiously stepped down from her position Thursday, after having spent the entirety of the Trump administration in that role. Claiming Wednesday's coup attempt left her "deeply troubled in a way that I simply cannot set aside," Chao nevertheless called her time in the Trump Cabinet the "honor of a lifetime." That honor evidently includes standing by the president after he defended the neo-Nazis in Charlottesville, Virginia, called African nations "shithole countries," enacted a travel ban targeted Muslims, instituted separation of mostly Latinx families at the border ... the list goes on and on. It's only now, after the boss she stood by for the whole of his tenure in office sicced his most fervent followers on her husband and his colleagues, that she's suddenly decided enough is enough. Goodness, that's not at all suspiciously convenient, is it?

In the hours after the president encouraged a mob to parade through the halls of Congress itself, some of very legislators targeted by Trump's MAGA hoards also began singing a very different tune. Georgia Sen. Kelly Loeffler (R), who hitched her political fortunes to the absolute craziest cars on the Trump train in the waning days of her runoff election — which she lost — suddenly and extremely conspicuously backed off her push to challenge her state's Electoral College results. Instead, during a surprisingly demure floor speech after Congress reconvened, Loeffler claimed that "the violence, the lawlessness, and siege of the halls of Congress are abhorrent and stand as a direct attack on what my objection was intended to protect: the sanctity of the American democratic process."

Or, put another way: "It's bad people put my life at risk by trying to overturn an election, when I would have simply done it for them without breaking any windows."

Florida Sen. Marco Rubio (R) was equally muted in his criticism of what transpired Wednesday, tweeting vaguely about his colleagues that "some misled you" about the possibility of overturning President-elect Joe Biden's electoral victory. Rubio conspicuously did not specify who those "some" might be, because if there's one thing Rubio has proven himself adept at, it's his ability to feign deep concern without actually doing anything about it.

But perhaps most notable among the president's allies was none other than onetime adversary-turned-obsequious toady Lindsey Graham, the recently re-elected South Carolina senator. In an animated speech during the Electoral College vote count on Wednesday night, Graham bemoaned the end of the Trump administration ("I hate it to end this way. Oh, my god, I hate it") while stressing that challenges to the Electoral College were "the most offensive concept in the world."

"All I can say is count me out," Graham said. "Enough is enough. I've tried to be helpful."

Is this the same Graham who not even two months ago allegedly pressured Georgia election officials to toss legal ballots so that Trump could win the state? I wonder what's changed since then? Could it be that, suddenly faced with the very real consequences of his actions, Graham has embraced his erstwhile spirit of bipartisanship and decided that bygones should be bygones? What remarkable personal growth in such little time!

The through-line for all these people and the many, many others I haven't mentioned by name is not so much a noble sense of patriotic duty and purpose, as it is a deep and laughably transparent need to protect their own necks and hope they can convince enough people that they've got a modicum of integrity left. When it comes to any self-reflection that could lead to accountability or — dare I say it — actual consequences for their role in setting the stage for Trump's rapidly spiraling dystopian power play? No no no, that's for someone else to deal with.

This isn't bravery. This is shirking responsibility. These people may have made the decision to gracefully-ish exit while they still could, but there's no award for doing the right thing when it's far too late to matter. Speaking out when this president has 13 days, max, left in office does not mean much when you've spent 1,814 standing by him while he did his dirt.

Don't let these Trumpists act like they should get anything more than a lifetime of contempt. It's the least you can do — and the very least of what they deserve.

More like this
Nancy Pelosi took a stand on the Jan. 6 committee, and it left Republicans whiny as hell
By Rafi Schwartz
The DOJ hangs Rep. Mo Brooks out to dry for allegedly inciting the January 6 insurrection
By Rafi Schwartz
"This is how I'm gonna die": Capitol cops' testimonies highlighted the cowardice of the GOP
By Vanessa Taylor
Stay up to date