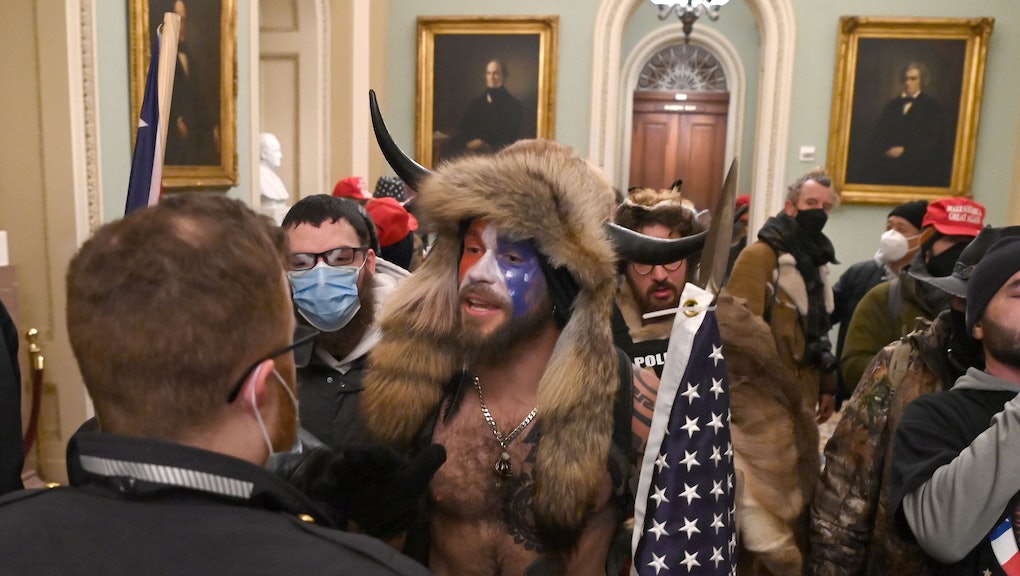 The coup is here

Nearly 200 years after racist, reactionary populist President Andrew Jackson earned the nickname "King Mob" after hoards of supporters massed in his home to celebrate his 1829 inauguration, a different racist, reactionary populist president has again cast his lot with violent masses — this time not in celebration, but as an expression of the proto-fascistic rage which exemplified his time in office.

On Wednesday, as President Trump finished addressing the assembled crowd of "Stop the Steal" supporters gathered outside the White House, hundreds of his most dedicated followers surged toward Capitol Hill, demolishing security barriers, scuffling with Capitol Police, and prompting members of Congress to be evacuated in an outpouring of terrifying Trump-instigated violence. While exact numbers are hard to estimate, the swelling mob was enough to prompt a lockdown of the whole of Capitol Hill, after Trump supporters — many clad in the American flag, but some also bearing Trump 2020 flags and Confederate flags — fought to force entry into the very institutions they claimed to be trying to protect.

The coup attempt — and yes, that's what it is — came just after Trump promised to lead the crowd of rally attendees to the Capitol, as Congress began the routine process of ratifying Joe Biden's electoral win. But while Trump immediately absconded back to the safety of the White House, his encouragement was evidently enough for his followers to breach the Capitol Building and halt the proceedings.

Despite lip service urging calm from various MAGA figures, including Donald Trump Jr. and GOP Rep. Steve Scalise — who just this morning gave a speech on the floor urging doubt over Biden's clear and confirmed electoral win — Wednesday's rally had long been expected to bubble over into overt physical conflict, with gathering groups of Proud Boys and other extremists pledging violence in the days leading up to the event.

In addition to the threat of mob violence, Virginia Rep. Elaine Luria (D) stated that her office had received a bomb threat and that she could "hear what sounds like multiple gunshots."

Despite the escalating violence and chaos, Trump's first public statement following his speech was to fan the flames of the already-out-of-control situation, tweeting criticism of Vice President Mike Pence's oversight of the electoral college ratification process.

Only later, as reports emerged of guns drawn in the House chamber, did Trump encourage his militia to "support our Capitol Police" by staying "peaceful."

To be clear: Donald Trump, the sitting president, urged his supporters to march to the Capitol, after riling them up with false declarations that the election had been stolen from him. Then, domestic terrorists, some brandishing flagpoles, stormed the U.S. Capitol, threatening elected representatives to the point where they've been evacuated into hiding. There are guns drawn in America's government chambers and reports of tear gas. This is a coup, whether you want to acknowledge that or not.

More like this
Wow, Donald Trump is actually following through on a threat to sue someone
By Rafi Schwartz
Trump's brilliant 2022 strategy is for Republicans to get into a messy intra-party fight
By Rafi Schwartz
Insurrection enthusiast and acid trip 'Batman' villain Roger Stone got served court papers on live radio
By Rafi Schwartz
Stay up to date