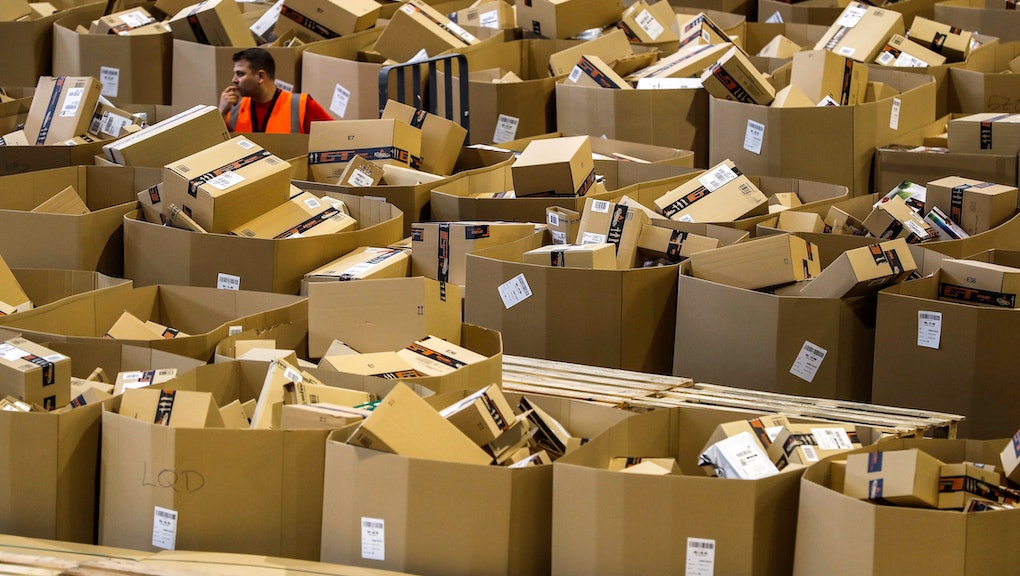 On September 20, hundreds of Amazon workers plan to walk out of the company's Seattle headquarters. The organized action is in part to support the worldwide climate strike set to take place that day, but is just as much an effort to get the attention of Amazon's leadership, which has been largely silent on the company's impact on our environment. It's one of the largest companies in the world, and its presence is felt thanks to Amazon's growing carbon footprint that expands with every item boxed up, stuffed in the back of a delivery truck and brought to your front door. These are just some of the ways that Amazon is affecting the planet.

While Amazon has turned itself into a multi-headed beast over the last two decades, the company's bread and butter continues to be getting goods to people and doing it as quickly as possible. Millions of products on Amazon are available for two- and one-day shipping, and making good on those quick turnarounds presents a significant challenge. While Amazon is often touted for its logistical expertise and ability to optimize every part of its supply chain to make these quick shipping and delivery practices possible, the outcome isn't always efficient. According to UPS, fulfilling e-commerce orders with small delivery windows has resulted in "more miles, fuel and emissions per delivery."

In order to meet the demands of shoppers, Amazon has started to work with a giant network of third-party couriers across the country who are able to get packages to their final destinations. Many of those companies that Amazon contracts with use large diesel trucks and vans that produce considerably more emissions than most consumer vehicles, which have become more fuel-efficient over time. Research from the University of California, Davis found that "rush deliveries" are far less efficient than standard shipping practices because drivers may end up covering longer distances to deliver items or taking fewer items in a single trip. The benefits also shrink when people order single items and deliveries can't be grouped together because of the quick delivery deadlines, resulting in incredibly inefficient trips. The result is a massive amount of carbon emissions. According to research from climate activist organization 350 Seattle, Amazon deliveries emitted about 19 million metric tons of carbon in 2017 — about the equivalent of five coal power plants.

Amazon has pledged to make its deliveries more environmentally friendly, launching an initiative called Shipment Zero that sets a goal of making half of all deliveries carbon neutral by 2030. The company also said this year that, for the first time, it would disclose its carbon footprint. That promise was made in February but Amazon has yet to release the first report on its environmental impact. That should give us a much better idea of just how big of an impact each item we order from Amazon has on the environment.

On top of burning through a considerable amount of fossil fuel just to get packages to their destinations, environmental consideration also has to be given to the packages themselves. Amazon is producing a ton of cardboard. According to a report from BuzzFeed News, waste collection company Waste Management has seen a 20 percent increase in the amount of cardboard being discarded over the last decade, attributed largely to online shopping services like Amazon. And many of those boxes are much larger than they need to be. Amazon has come under fire for putting small items in massively oversized boxes — a practice that the company has taken efforts to curb recently. But there is no denying that Amazon is at the very core of a huge uptick in the amount of cardboard being produced and tossed out.

That would be fine, seeing as cardboard is considered to be an easy material to recycle, except for the fact that Americans are particularly bad at actually recycling these boxes. A report from USA Today found that the amount of cardboard being recycled has actually dropped in the U.S. while the amount being produced has spiked. The reason, as it turns out, is because many Americans don't know how to recycle their goods. A 2015 report found that as much as 16 percent of items recycled by Americans is considered to be "contaminated" by items that can't be reused. The result is simply tossing out everything, meaning both the contaminating product and the recyclable goods end up in the same landfill. To be fair to these consumers who have good intentions but poor execution, recycling is complicated. Different cities accept different goods and have different requirements that have to be met. There is little cohesion in recycling policy across different regions, and many smaller communities still don't offer curbside pickup for recycling, making it harder for people to discard of reusable goods. Some cities have even started to do away with recycling programs entirely, driven in part due to the fact that countries like China that used to offer to import our waste have stopped doing so.

The end result of all of that? Those very recyclable Amazon boxes simply become trash. Amazon reported that it shipped more than five billion items to Prime subscribers alone in 2017, and likely many more to other shoppers. That's a lot of boxes — the vast majority of which are not making it to recycling centers. Instead, the cardboard is often buried in a landfill or burned, which releases carbon dioxide. The lack of proper recycling practices and programs isn't necessarily Amazon's fault, but there's no denying that the company's packages are increasing the amount of waste that has to be processed one way or another.

While Amazon is certainly best known for delivering your goods to you, one of the fastest-growing businesses for the company is cloud services. According to the company's latest earnings report, its Amazon Web Services (AWS) grew by 41 percent during the first quarter of 2019, generating $7.7 billion in revenue and becoming the company's most consistent source of profit. While you probably don't realize it, AWS is everywhere. It currently dominates the cloud computing market, owning nearly 40 percent of the business. When you stream your favorite shows on Netflix, it's AWS that enables that. Same with sites like Pinterest or communications platforms like Slack. It's something that you likely don't even think about until it fails, because it takes a lot of the internet down with it — something that has happened multiple times over the last year or so.

While we don't think of the cloud having a physical presence, it does indeed have one. To operate AWS, Amazon has built massive server centers that have become the backbone for much of the internet. These types of data centers actually have a pretty massive carbon footprint. Recent research suggests that the information and communication technology (ICT) business (i.e., server operators like Amazon) account for two percent of global CO2 emissions — the same amount attributed to the notoriously wasteful aviation sector. Given Amazon's dominance in the field of cloud computing — even other major competitors like Google operate less than 10 percent of the cloud computing market — it's fair to say that it is a major contributor to this problem.

Amazon has promised that it aims to achieve 100 percent renewable energy with its data centers and that it regularly exceeded 50 percent renewable energy usage in 2018. However, Greenpeace has called into question the company's commitment to that goal. A report published earlier this year by the organization found that, during Amazon's massive expansion of data centers in Virginia, the company "appears to have abandoned its commitment to renewable energy, with evidence of a dramatic expansion in Virginia over the past two years without any additional supply of renewable energy." Per Greenpeace, just 12 percent of Amazon's data centers in the region are powered by renewable energy sources. Amazon also scored relatively poorly on Greenpeace's 2017 report tracking how tech companies were working to keep their online products environmentally friendly. While companies like Apple, Google and Facebook all scored highly because of their use of renewable energy and carbon offsets, Amazon was given a grade of a C due to its lack of transparency and failure to procure renewable energy options. According to Greenpeace, about 30 percent of Amazon's data centers for its Prime Video streaming service use coal power while 24 percent use natural gas, compared to just 17 percent clean energy sources.

None of this is helped by the fact that AWS has reportedly courted business partnerships with large oil, gas and coal companies as it continues to expand its physical presence. A report from Gizmodo noted the company had accounts with BP, ConocoPhillips, ExxonMobil and Halliburton among others. Representatives for AWS has also reportedly attended oil and gas conventions in an attempt to curry favor within the industry. Amazon also paid to sponsor an event organized by the Competitive Enterprise Institute, which has questioned the legitimacy of the scientific consensus that climate change is real and caused by humans. As part of its ongoing lobbying efforts, the company has also put money in the pockets of 68 members of U.S. Congress who have voted against climate change legislation.

Amazon talks about sustainability regularly and has set ambitious goals for itself, but the company's actions seem to undermine those intentions. The company has a long way to go to reach sustainability, and it appears to be taking steps backward even while talking about moving forward.