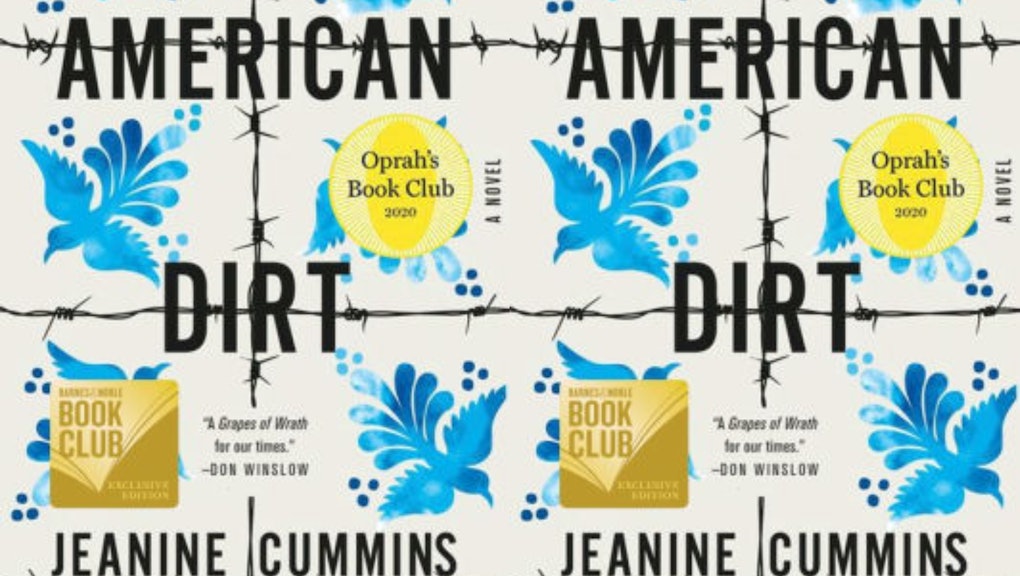 Via Barnes and Noble

'American Dirt' and the frustrating use of Mexican migrants as props

American Dirt, a fictional novel by Jeanine Cummins, has been hailed as a heart-wrenching portrayal of what Mexican migrants experience when they cross the border by book reviewers, Oprah, and Gina Rodriguez. Except, as a number of journalists and critics have pointed out, Jeanine Cummins isn’t Mexican, has never been undocumented, and seems to have little understanding of the actual lives of either. Of course, it isn’t a requirement for fiction writers to have lived the experiences of their characters — but in this case, the marketing of her book suggests a lack of any real knowledge about the unique challenges faced by the people she’s based her novel on.

Gurba’s review has been widely shared, along with Cummins’s author’s note in the book, where she detailed over four years of interviewing people in the States and in Mexico. In the note, Cummins wrote that she wanted to bring humanity to “the faceless brown mass” that she interprets Mexican migrants to be.

“I wish someone slightly browner than me would write it,” Cummins continued. But apparently she or her publisher, Amy Einhorn from Flatiron Books, couldn’t find anybody. There were simply no Mexican writers available for a seven-figure book deal for a fiction novel.

But again, the book itself isn’t the subject of my ire, because it can’t be. I haven’t read it, and I probably won’t. And that is because the rollout alone illustrates how Cummins and her publishers view the real-life subjects of her fictional works: as props. In a now-deleted tweet, Cummins shared photos from a dinner party celebrating the book’s release. In the photos, floral centerpieces wrapped in barbed wire lined the middle of the table. The flowers and the wire were meant to be in reference to the American Dirt book cover, which is outlined in barbed-wire and covered in those exact flowers.

It certainly referenced the cover — though it was also callous. Here is a group of people eating in a private dining room in New York City, communing over the concept of a border wall while as far as you can be from the real border in every sense.

It would appear that the target audience for American Dirt doesn’t see why the imagery of a border fence would be more violent and traumatizing than powerful or dramatic. It was only after the extensive backlash that she deleted the photos from her Twitter account.

The rights to the book have already been purchased for a film adaption, one that will be helmed by Imperative Entertainment and written by Charles Leavitt. Imperative Entertainment is the production company behind Clint Eastwood’s The Mule, a story about a “casually racist” old man who begins working for a Mexican cartel in his old age. Leavitt wrote Blood Diamond, a story in which Leonardo Dicaprio transforms himself from white mercenary to white savior, against the backdrop of the conflict in Sierra Leone. It is hard to imagine Lydia, the protagonist of American Dirt, being portrayed with any more care or compassion in the hands of these entities, whose most famous works have been in softening the sins of white people for white audiences.

American Dirt has been able to bask in the glory of high end co-signs. It’s one of Oprah’s book club selections, it’s been shared on the Instagram feeds of celebrities like Gina Rodriguez and Yalitza Aparicio, and placed on must-read lists by legacy media outlets. In all of these channels, American Dirt is being sold, more or less overtly, as a book made for people who want to consume the trauma of “the faceless brown masses” as some sort of statement of moral clarity or superiority. The most disheartening part is how strong a selling point that is in 2020.

More like this
The first frustrating roadblock in Marilyn Manson’s sexual assault lawsuit is here
By Chloe Stillwell
Colin Kaepernick's new Netflix documentary highlights the man behind the icon
By Keith Nelson Jr.
The bittersweet success of 'Shang-Chi' after a year of pandemic-fueled Asian hate
By Brandon Yu
Stay up to date