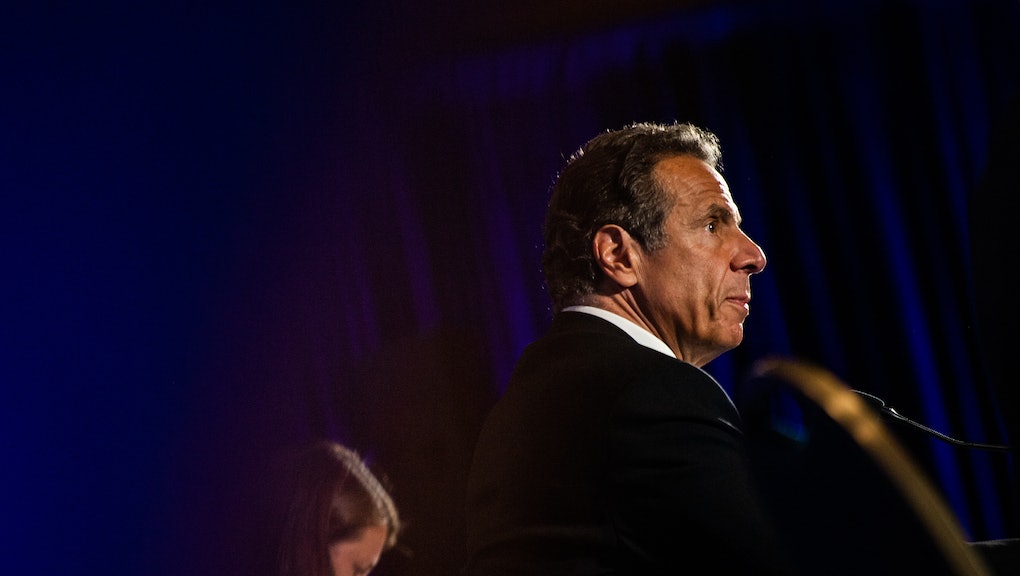 Despite New York Gov. Andrew Cuomo's best efforts to brush away last week’s sexual harassment accusations made by a former aide, it seems he’ll have to face the music. On Monday, New York Attorney General Letitia James confirmed her office is moving forward with an investigation into the allegations against Cuomo — which now include reports from two additional women.

The latest in the growing list of accusations made against Cuomo comes from Anna Ruch, a 33-year-old woman who attended a 2019 wedding that the governor also attended. Ruch told The New York Times that Cuomo — who she had never met prior to the wedding — placed his hand on her bare lower back while the two were having a conversation. When she removed his hand, Cuomo allegedly called her "aggressive," put his hands on her cheeks, and asked if he could kiss her. The request was reportedly loud enough that one of Ruch's friends overheard it. Shocked by the interaction, Ruch said she pulled away from Cuomo. The Times also spoke with Ruch's friend who heard the exchange, reviewed photographs from the event, and read contemporaneous text messages that helped corroborate the story.

Cuomo has not directly responded to the latest accusation, but one day prior to the Times publishing its report, the governor offered what amounts to the "I'm sorry you feel that way" of apologies for his bad behavior. "I now understand that my interactions may have been insensitive or too personal and that some of my comments, given my position, made others feel in ways I never intended," he said in a statement on Sunday. "I acknowledge some of the things I have said have been misinterpreted as an unwanted flirtation. To the extent anyone felt that way, I am truly sorry about that.”

To quickly review the alleged actions that Cuomo claims were "misinterpreted as an unwanted flirtation": Former aide Lindsey Boylan said that Cuomo gave her an unwanted kiss on the lips and joked about playing strip poker, among a variety of other inappropriate comments that left Boylan feeling uncomfortable working for him. A few days after Boylan came forward, another former Cuomo aide, Charlotte Bennett, 25, told The New York Times that the governor asked her personal questions about her romantic relationships, asked if she “had ever been with an older man,” and commented that he was open to relationships with women in their 20s — in fact, Bennett said the 63-year-old Cuomo told her he was open to a relationship with anyone over 22 years old.

Cuomo's office initially denied both accusations, calling Boylan's account "quite simply false" and telling the Times that he "never made advances" on Bennett. Given the denials, it's not shocking that Cuomo attempted to simply sweep all this misbehavior under the rug by offering to submit himself to a sham investigation. On Saturday, the governor directed the matter to U.S. District Judge Barbara Jones, who just so happens to have been a partner at a law firm with one of Cuomo's closest advisers, the Democrat & Chronicle reported. Small world! Who could have possibly imagined?

When that move was met with resistance, Cuomo floated the idea that New York Chief Judge Janet DiFiore — a Cuomo appointee — should work with James to select a private attorney to handle the investigation. When that, too, was shot down (with James stating that New York law “clearly gives my office the authority to investigate this matter once the governor provides a referral”), Cuomo finally acquiesced, allowing the attorney general’s office to have full control over the investigation. “The Governor’s office wants a thorough and independent review that is above reproach and beyond political interference,” Cuomo special counsel Beth Garvey said in a statement, after the governor was all but backed into a corner. “Therefore, the Governor’s office has asked Attorney General Tish James to select a qualified private lawyer to do an independent review of allegations of sexual harassment.”

The investigation is now officially in James’ hands, and her office will have full subpoena power to pursue documents and witness testimony. “This is not a responsibility we take lightly as allegations of sexual harassment should always be taken seriously,” James said in a statement, noting that the ultimate findings of the investigation will be made public.

No timeline has been set for the investigation, but if the last week is any indication, the public accounts of Cuomo’s bad behavior might be just the tip of the iceberg. “As we know, abusers — particularly those with tremendous amounts of power — are often repeat offenders who engage in manipulative tactics to diminish allegations, blame victims, deny wrongdoing and escape consequences,” Bennett said in a statement on Monday. “It took the Governor 24 hours and significant backlash to allow for a truly independent investigation. These are not the actions of someone who simply feels misunderstood; they are the actions of an individual who wields his power to avoid justice.”