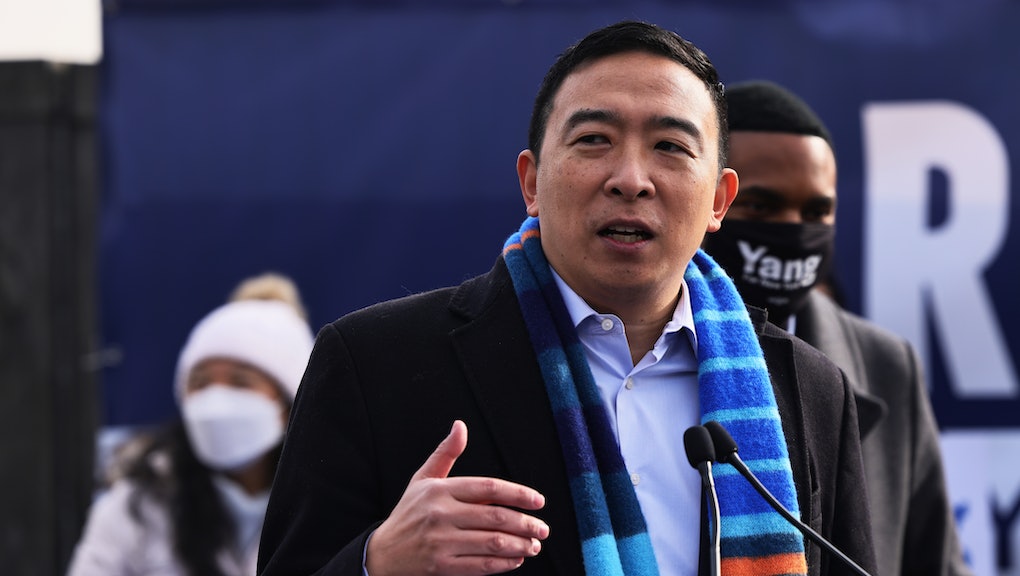 Former presidential candidate and champion of universal basic income Andrew Yang announced a long-rumored New York City mayoral campaign on Wednesday night. Yang kicked it off with a trailer-length campaign video, directed by Darren Aronofsky, but it was sparse on the dude’s penchant for gratuitous onscreen suffering.

While there were memeable takeaways from the two-minute clip — Yang stumping for the Mets in a quiz of New York interests, those melodramatic piano shots — the most noteworthy and quintessentially Yang facet of the campaign appeared on his website. Under a section dubbed “Culture, Society, and Nightlife,” Yang highlights a plan to bring New York City — a place famously decentered from popular culture — to the forefront of “new cultural touchstones.” The plan: Make the city more appealing to TikTok teens.

Beyond the one policy where he just intends to give people checks, the TikTok Hype House as Economic Stimulus is the first of many meandering policies tantamount to Yang’s whole deal. Of course he had to pick the one branch of entertainment that doesn’t draw a tangible audience to the city, or any appreciable benefit beyond some noisy, COVID-magnetic parties. So for now, it’s an incredibly funny early nugget for a campaign that’s already spawning overused Steve Buscemi memes. That said, Yang enters a crowded mayoral field — more than a dozen candidates at press time — with an overwhelming advantage in name recognition.

This has already placed a target on his back, as anyone with a national media profile might find in a mayoral race. Yang, whose campaign video strains to convey just how New Yorka he is, rattling off jabs at the Knicks and celebrating his favorite spots in town, has faced criticism for fleeing New York City during the pandemic. In an interview with The New York Times earlier this week, Yang explained his family’s choice to live outside of the city, when he wasn’t campaigning for Joe Biden or getting out the vote in the Georgia Senate runoffs. “We live in a two-bedroom apartment in Manhattan,” he told the Times. “And so, like, can you imagine trying to have two kids on virtual school in a two-bedroom apartment, and then trying to do work yourself?”

A whole slew of New Yorkers — including some of his fellow mayoral candidates — pointed out that they can imagine it, because they’re living it every day, so Yang was forced to clarify his position again. On Thursday, likely amid questions about his dedication to the city, Yang challenged anyone who dared to challenge his bona fides. “Anyone who thinks my New Yorkness is in question should come and say it to my face and see how ridiculous it is,” he said.

So, in addition to the titanic recovery efforts from COVID-19 and its economic fallout, the New York mayoral race stands to be all about leveling up on current Mayor Bill de Blasio, and that precious New Yorkness.

More like this
Trump is having his best week since leaving the White House
By Rafi Schwartz
Why is Facebook this confused over letting Donald Trump back?
By Rafi Schwartz
How “stoopers” turned New York City sidewalks into trendy, sustainable thrift shops
By Jasmine Vojdani
Stay up to date