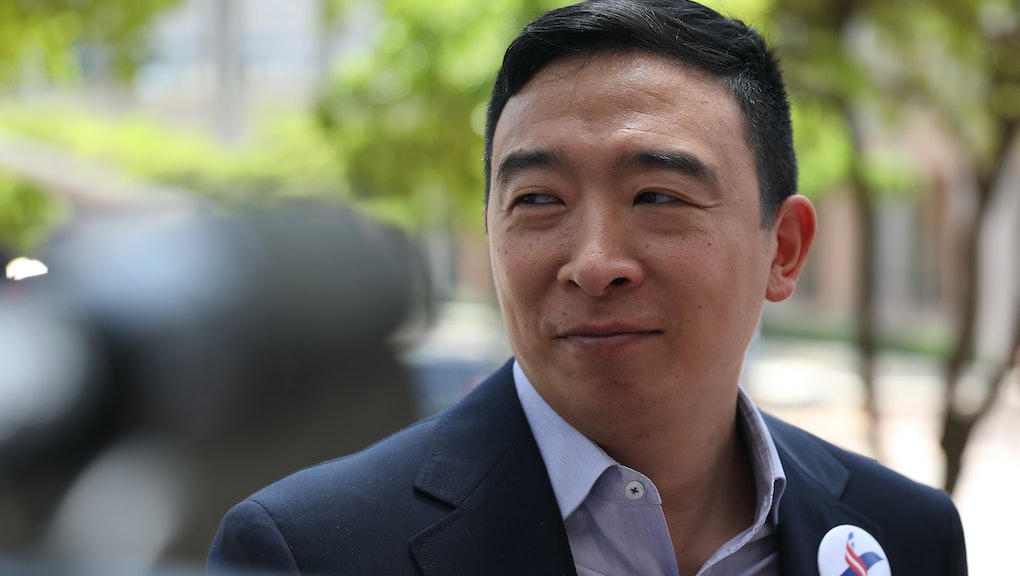 Andrew Yang believes in UBI. Here's what his plan would really do for America

Many presidential candidates seem to have one signature issue they're known for (remember the Medicare-for-All discussion and how Bernie Sanders "wrote the damn bill"?). For Andrew Yang, it's universal basic income. Universal basic income is guaranteed income provided from a country's government to its citizens or residents with no work requirement. Yang, who calls his UBI plan a "Freedom Dividend," wants to give every United States citizen age 18 and older $1,000 per month ($12,000 per year). "The Freedom Dividend would provide money to cover the basics for Americans while enabling us to look for a better job, start our own business, go back to school, take care of our loved ones, or work towards our next opportunity," his 2020 campaign website claims.

What this means for Americans is still unclear. While there are some examples of universal basic income being implemented in countries around the world, there's not been one quite like Yang is proposing. But economists and experts who have analyzed his plan have an idea on what it would all really mean.

"Nothing is impossible, but there would certainly be challenges — as there are with any new, large federal program," Kyle Pomerleau, an economist and resident fellow at the American Enterprise Institute. tells Mic.

Each month, every American would get a check for $1,000. If a person is already participating in certain welfare or social programs, they would have to choose between keeping those benefits or receiving the $1,000. UBI would, however, stack on top of veteran's disability and social security benefits.

Of course, the money that would go to Americans has to come from somewhere. Pomerleau notes that Yang's plan would cost about $3 trillion per year. "Americans would need to get comfortable with a tax increase of nearly that size to sustainably fund that program."

Yang proposes consolidating some of the current welfare programs and implementing a 10% Value Added Tax on goods and services. But Pomerleau found that a 10% VAT would not be sufficient to finance the candidate's program. "It’s more likely that the tax would need to be at least 22%," he says.

Ed Dolan, an economist and senior fellow at the libertarian-leaning Niskanen Center, tells Mic that outside of taxes, the economic consequences of making monthly payments to citizens could also include cutting programs like Supplemental Nutrition Assistance Program and Temporary Assistance for Needy Families, along with so-called "middle class welfare" like mortgage interest deductions.

The U.S. could also just add to its national deficit to pay for the program, Dolan says, to help get the economy out of the recession. "I think Yang pretty much agrees," he says.

What would the UBI mean for Americans?

Economics expert Kimberly Amadeo has compiled a ist of UBI pros and cons. The pros side includes the facts that workers would be able to wait for a better job or wages rather than taking the first available gig, people would be enabled to return to school or stay at home to care for a relative rather than work, and there would be built-in help for people when starting a family. Cons include inflation, possible disincentives for people to work, and the fact that the UBI may not be sufficient to truly help those who are poverty-stricken.

Yang points out on his website that technology has replaced millions of American jobs and "decimated communities." He writes:

We are experiencing the greatest economic and technological shift in human history, and our institutions can’t keep up. Without the Freedom Dividend, we will see opportunities shrink as more and more work gets performed by software, AI, and robots. Markets don’t work well when people don’t have any money to spend.

According to Yang, "putting money in people’s hands grows the economy, particularly when those people need the money and will spend it." He believes his Freedom Dividend would transform the country, saying that "communities everywhere will have more vibrant local economies, creating more jobs and leading to new businesses."

Dolan says he is "not as worried about the issue that automation will make work obsolete as Yang is," but he does believe that a UBI would reduce poverty for people incapable of working. While Pomerleau notes that some people may choose to work less or not at all, Dolan thinks that "by replacing means-tested welfare with a UBI, you would increase work incentives for low-income workers." Yang's website states that people would still work, and cites a 2016 Harvard-Massachusetts Institute of Technology study that found that cash transfers do not have an effect on work behavior.

Pomerleau adds that for many Americans, a UBI "would greatly increase their after-tax income and that would make them better off." But some people could potentially be worse off, too, "because Yang would enact a new tax, but also make switching to the UBI voluntary," he says. "Individuals who currently get government benefits worth more than $10,000 would likely stick with their current benefits. However, these people would end up paying a new tax, but get no additional benefits."

Dolan says a UBI could certainly be implemented in the United States, but also notes that "it would not fix all our problems," like, say, inadequate access to health care.

Yang notes on his website, though, that while he does have a signature issue, his campaign is about more than the Freedom Dividend. That being said, he writes, "we must empower our people and rebuild our economy starting from each individual and family."

More like this
Um, Biden's big immigration deal seems pretty similar to Trump's
By AJ Dellinger
The Chauvin trial is incapable of delivering real justice
By Vanessa Taylor
John Cornyn is either incredibly dumb, incredibly craven, or incredibly both
By Rafi Schwartz
Stay up to date