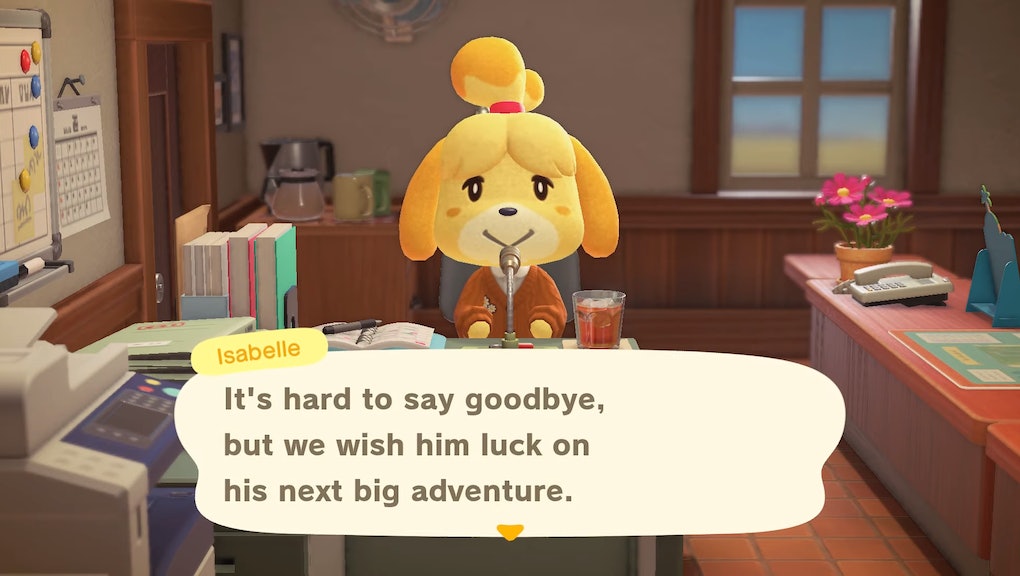 Animal Crossing: New Horizons seems tailor-made for our quarantined times. A fun, relaxing game that encourages players to create their own island paradises by landscaping, decorating, and hanging out however they want, it can give users a sense of control during a time when so much seems uncertain. And while a lot of the game is easily customizable, including inviting select villagers to come and live in your idyllic island society, if one of those new residents turns out to be a bad fit, kicking them out can be a bit tricky.

Think about it — you hate clowns and then a sheep dressed like a clown moves onto the island.

You're trying to create an ideal, peaceful oasis and a cranky villager drops in and insults every gift you give them.

You're turning the place into the ultimate hangout for cuties and a bear with an island-wide surveillance system moves in and creeps everyone the hell out.

These imperfect villagers can be a splash of cold water on your warm and cozy refuge. Tolerating them is tough, but getting rid of villagers is even tougher. And players have taken to creative and increasingly extreme ways to vent their frustration as they drive their unwanted villagers off the island.

Fence away the problem

According to guides by IGN and Eurogamer, the best way to get rid of a villager is by ignoring them. Shunning the undesirable resident will make them feel neglected until they get to a point where they're thinking about leaving. To speed up the process, some people want to make sure these guys get no contact at all.

That means fences. Lots of fences. All around the house.

But wooden fences aren't always satisfying to use. They look too welcoming and fitting for some homes. How about... barbed wire and warning signs? Ooh, or going full Cask of Amontillado and bricking them in?

What? Don't look at me that way.

Walls aren't for everyone, though. Sometimes the villagers still slip through their barricades. Watching them make themselves at home can be super irritating, which is why a few players have picked more creative ways to express their dislike. Using New Horizon's custom design feature to make eviction notices and 'not allowed' signs, for example.

That way everyone will know which one has gotta go.

Build a whole-ass cliff around them

Fences and signs aren't enough, you say? I get you. The very sight of these villagers' faces are just too much to handle. They deserve to be truly and completely exiled into the far corners of your island. They should have cliffs built up around them, a forest of trees surrounding the home, or a moat to keep them in place.

It's time to pull out the terraforming tools.

At the end of all this harassment, the reward is finally seeing the unwanted villager leave. When the neglected resident has a thought bubble over their head, it means they're contemplating something and they need the player's help. You can talk to them to see what they're thinking about and politely encourage them to stay or leave.

"Change can be good" indeed. With the villager gone, players can rejoice. Finally, the island is a paradise once more.

One thing to keep in mind, though: If you're going to get rid of villagers, it's best to commit to it quickly. You never know how your feelings might evolve over time...

More like this
How the shock and confusion of 9/11 enabled our modern conspiracy era
By AJ Dellinger
There are QAnon NFTs now, because one grift deserves another
By AJ Dellinger
Scientists are potty-training cows in an effort to save the planet
By AJ Dellinger
Stay up to date