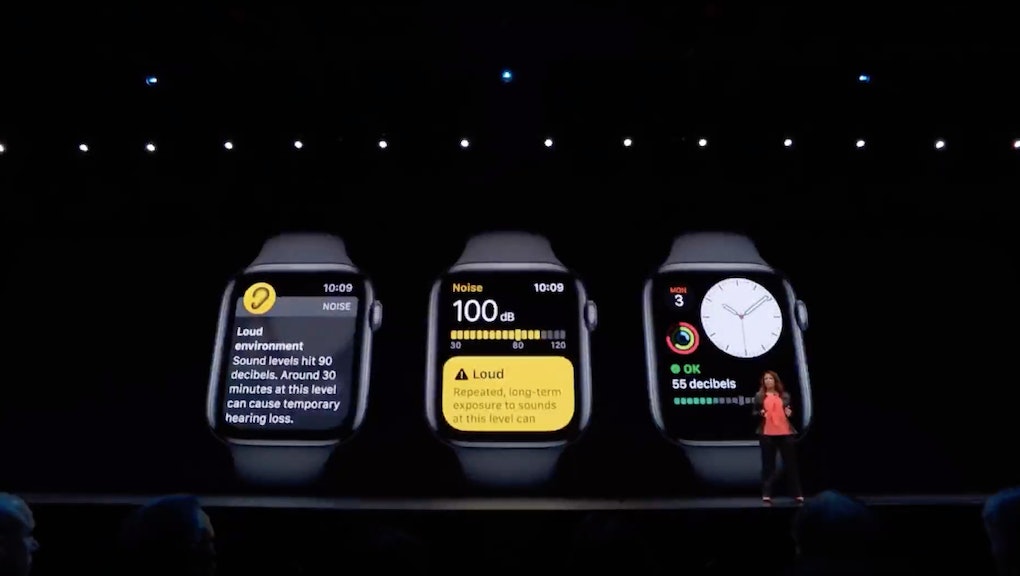 The Apple Watch has always tracked some health information like physical activity and heart rate, but with the upcoming update to watchOS 6 this fall, it will also monitor sound to make sure you aren't damaging your ears. Apple Watch's new app called Noise will keep an eye on the decibel level of the environment around you. When things get too loud, it will issue a warning so you can protect your ears or remove yourself from the situation when needed.

Here's how the Noise app will work: the app will periodically use the microphone built into the Apple Watch to take a sample of the sound around you. Users will also be able to open the app and perform on-demand checks if they feel like things are getting too loud. Noise will warn users when sound levels reach or exceed 90 decibels, the level at which hearing can be affected. To protect your privacy, Apple claims that the app will never record or save any audio, so you shouldn't have to worry about your Apple Watch saving anything that it hears.

Apple's focus on hearing health is an important one. According to the Centers for Disease Control and Prevention (CDC), approximately 40 million people in the United States already suffer from some form of hearing loss. One of the leading causes of long-term hearing damage is extended exposure to loud noises. The National Institute on Deafness and Other Communication Disorders, part of the U.S. Department of Health and Human Services, reports that as many as 10 million Americans have experienced noise-induced hearing loss.

These issues can be triggered by all sorts of situations. The CDC warns that concerts and movie theaters are higher risk events, but even more innocuous settings like restaurants and bars can produce levels of noise that cross the decibel threshold and could result in hearing loss.

Perhaps surprisingly, this has become an increasingly noticeable problem for younger generations. Hearing loss is about 30 percent higher among teens today than those in the 1980s and 1990s, according to an NBC report. The World Health Organization said in 2015 that as many as 1.1 billion teenagers and young adults are at risk of hearing damage and noted that as many as 40 percent are exposed to damaging levels of sound at entertainment venues. Music festivals are noteworthy offenders, as being at the all-day shows can effectively be the equivalent of listening to a ringing siren go off for hours on end.

The Apple Watch's new Noise app should be able to act as a deterrent to these types of unfortunate outcomes. By making users aware of the potentially damaging levels of sound around them, they can encourage users to leave loud areas or at least moderate their exposure to excessive sound.

There’s just one area where the Noise app won’t help, and that’s with your headphones. Headphones are believed to be one of the leading causes of the increased levels of hearing damage suffered by teens and young adults. However, Apple confirmed to Mic that the Noise app will only measure external sounds and won’t provide any sort of warning when you are listening to your music excessively loud. Maybe losing your AirPods will end up keeping you from losing your hearing.