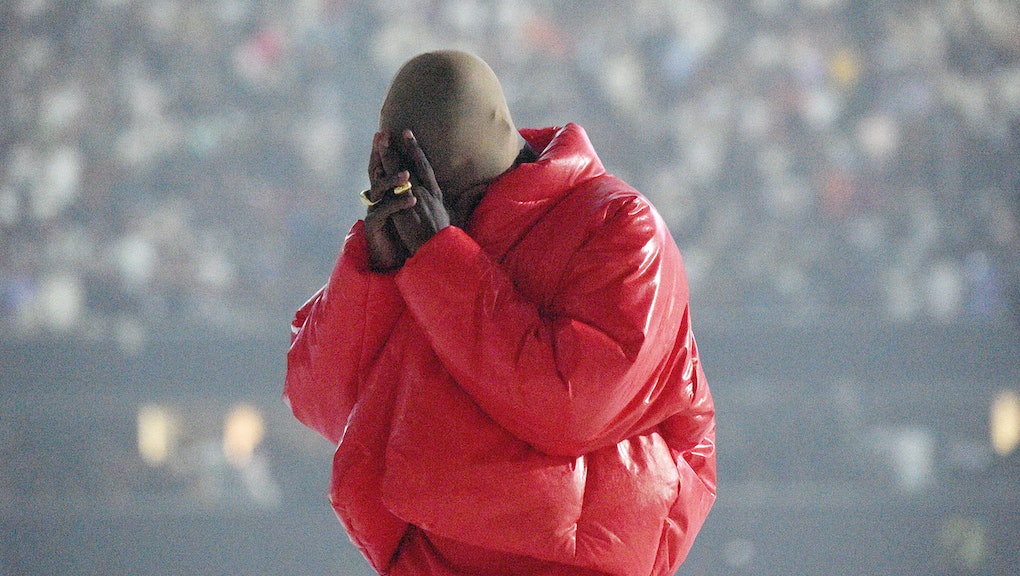 Here we go again. It’s not exactly deja vu, but it does feel like we’re stuck in a loop. Kanye West has once again announced a listening party for his (supposedly) upcoming album, DONDA. The gathering, taking place on Aug. 26 at Soldier Field in his hometown of Chicago, is the third such event in the last few weeks and follows a string of promised release dates that have come and gone with nothing to show for. Throughout this stretch, the rapper has played multiple versions of the album, literally camped out in a prison-like room inside the Mercedes-Benz Stadium in Atlanta — where the first two listening parties took place — invited star guests to visit, and live-streamed himself sleeping. And yet, DONDA remains a figment of the imagination to the broader public.

It is hard, in turn, to feel anything with this most recent announcement, outside of incredulity, indifference, or perhaps a combination of excitement and the self-loathing that follows for being naive enough to be pulled back in. How much longer will fans be strung along? For years, West’s M.O. around album releases — the ones that happened and the ones that ultimately didn’t — has been full of antics, empty promises, and controversies. Yet when DONDA’s release was quietly announced earlier this summer without a word or public maneuver from West himself, some people (more specifically, let’s just say when I look in the mirror I may or may not see someone in clown makeup) thought he had shifted his inclinations and would simply let the music speak for itself.

What has transpired instead — two arena listening parties and major commercial endorsements from Beats by Dre and Apple Music that both corroborated ultimately empty official release dates — is perhaps the most frustrating stretch of an album rollout within a career littered with chaotic rollouts. West has long seemed to subscribe to the idea that the life of the artist is as much a performance and part and parcel to the artwork. And his volatility, whether partially fueled by his mental health or not, has only fed into his brand as a self-proclaimed crazy genius. For better or worse, that might all be well and true, but there is also a limit to the audience’s interest in the stunts, particularly when the artist is repeatedly and deliberately teasing and guarding the work itself from seeing the light of day.

Yet, in the words of a Ye stan, perhaps West is pulling all of the strings, and all of these botched dates and listening parties were destined as a hype-generating, interactive apparatus. In this time, he’s reportedly racked up millions from Donda merch sales, pushed demands for YEEZY, and of course made money from the sold-out events themselves. There’s also the notion of fan-input, the relatively plausible theory that he’s using the listening parties and reactions to the songs that were played as a metric for how to tweak the music ahead of its release (a seemingly alternate approach to the way he tweaked the mixes of songs after their release like on The Life of Pablo). But as we've seen in the past, West likely just hasn't finished the assignment and is asking the teacher for yet another extension.

And yet, this time, the event could mean the album will actually arrive. (Picture me reapplying clown makeup.) The vice president of Def Jam has indicated it will drop after the event, and most notably West is moving this listening party to Chicago, where he grew up with his mother, Donda herself. But if it doesn't — what then? The last few years have been the most alienating period for fans of Kanye West. I’ll still listen to Donda when it drops, but the hype has significantly diminished. And I can’t help but feel my long-term interest overall slowly eroding with each big thing that ends up being another diversion. How much longer can we continue to pay attention?