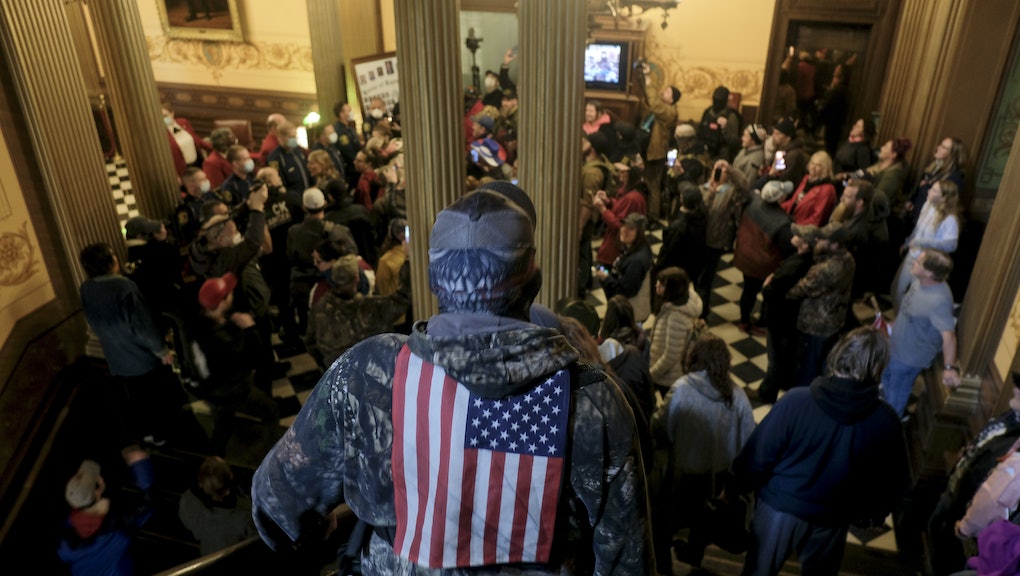 For the second time in as many weeks, right-wing protesters in Michigan — some of them armed — rallied at the state capitol in Lansing on Thursday to rage, scream, and threaten lawmakers debating whether to extend the state's ongoing lockdown in response to the coronavirus pandemic.

Thursday's rally marked a significant escalation in the ongoing "Re-Open" protests which, fueled by both the president and far-right agitators, has seen crowds in a number of states agitating for eased restrictions amidst social distancing orders and business closures designed to help mitigate the spread of coronavirus. While many of the previous protests have been largely without incident, what happened in Michigan came as close as we have seen so far to an outbreak of actual violence, as enraged, gun-toting protesters attempted to storm the statehouse floor during the legislative session.

Some armed protesters managed to make it to the gallery above the floor, where state Sen. Dayna Polehanki (D) claimed they shouted down at her and her colleagues — some of whom wore their own bulletproof vests out of concern for their safety.

Speaking with NBC News, a spokesman for Michigan's state police confirmed that it is legal in Michigan to openly carry guns so long as the weapon is visible, and there is lawful intent.

According to CNN, only 275 protesters — of an estimated 400-700 total — were allowed into the capitol building at a time. A police representative downplayed the rally to the network, explaining that the protesters were simply "chanting peacefully and that was it."

Let's be clear: Using even the implication of violence (and really, what other purpose is there for walking around with assault rifles and tactical gear?) to intimidate lawmakers into a political outcome desired only by a small minority is, put simply, a form of terrorism.

President Trump, who previously urged protesters to "LIBERATE" Michigan, responded to Thursday's rally by suggesting Democratic Gov. Gretchen Whitmer "give a little, and put out the fire" for these "very good people" who, again, tried to storm the statehouse with guns.

Ultimately, the state's Republican-controlled legislature chose not to extend the governor's emergency orders, prompting Whitmer to issue a new executive order pushing the emergency declaration through May 28. There are so far more than 40,000 confirmed coronavirus cases in Michigan, and nearly 4,000 deaths.