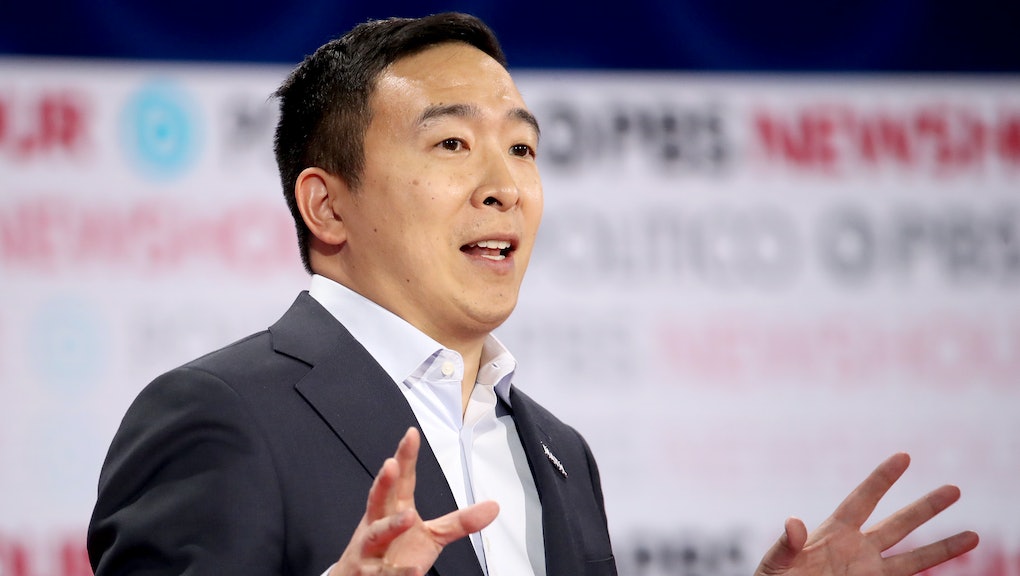 As an autistic woman, the disability question at the Democratic debate finally made me feel seen

History was made at Thursday’s Democratic debate in Los Angeles, when Politico correspondent Tim Alberta asked a question about integrating people with disabilities into their communities and the workforce. For the 61 million American adults with disabilities, it was the first time ever that they’d seen themselves reflected in the questions asked of the candidates seeking to represent them in the Oval Office.

The question was initially directed to billionaire longshot candidate Tom Steyer. When Steyer skirted answering the question, Alberta posed a similar question to tech entrepreneur Andrew Yang, asking if Yang could “outline specific steps that the government should take to help integrate these young people into the workforce and into their local communities.”

Yang responded by asking the audience if they had family members, friends, or neighbors with special needs or autism. Yang is the father of an autistic child. Audience members raised their hands and clapped in the affirmative. As an autistic woman myself, I perked up.

Yang specifically elaborated on the issue of unemployment, saying, “We go to employers and say, ‘Hey, this special needs person can be a contributor in your workplace,’ which may be correct, but that's not the point.” Instead, Yang argued, the point is that humans have “intrinsic value” and should be protected on those merits alone. He also plugged his signature Freedom Dividend of $1,000 a month, which he said is “going to help families around the country adapt. And then we're going to take this burden off of the communities ... and make it a federal priority, not a local one.”

Yang’s argument has merit. Disability drives innovation, and people with disabilities are able to bring competitive advantages to the workplace, so his focus on employment was sound. But his point that “we have to stop confusing economic value and human value” was salient, and his rhetoric echoed what disability community leaders, activists, and allies have been saying all along — but from the powerful position of a presidential debate stage.

After Yang’s response, Massachusetts Sen. Elizabeth Warren jumped in to address the question. Warren, a former special education teacher, trafficked in specifics in her trademark wonky style. She in particular said she wants to prioritize the full funding of the Individuals With Disabilities Education Act, also known as IDEA, a law that requires that students with disabilities receive a free and appropriate public education. That means these individuals benefit from the creation of an individualized education plan (IEP) in order to receive special education services after requesting and receiving an evaluation; the IEP is a collection of documents that detail a student’s strengths, weaknesses, and goals, helping to create a comprehensive, custom record of the student’s education.

For me, hearing autism and disability mentioned in the debate was the first time I felt each of my identities was fully acknowledged.

In 2017, the Supreme Court ruled that public schools need to provide more than the bare minimum so students with disabilities will be able to make “appropriately ambitious” progress. A bare minimum education would be a free education within the school system, rather than one that addresses all the complexities of a student’s situation. While the ruling did not make an immediate impact, it sends a clear signal that special education issues are being heard and respected nationwide — and that standards need to be higher for students with disabilities.

That’s why it was so monumental that Warren discussed education for students with disabilities in specific terms. When IDEA was initially passed (as the Education for Handicapped Children Act) in 1975, Congress pledged to fund 40% of the additional cost of special education. Congress now only funds about 14.6% of the cost. The underfunding of IDEA has affected my life: My family chose to place me in private schools because the accommodations and offerings in the public schools were unable to properly meet my needs and allow me to be challenged academically while growing socially. If IDEA was fully funded, perhaps my childhood— and the lives of many students with disabilities and their families today — would be different.

Community leaders applauded Warren’s desire to fund IDEA. Ari Ne’eman, co-founder and former president of the Autistic Self-Advocacy Network, and Shoshana Finkel, a blind activist, both tweeted in support of the senator’s plan.

Warren also touched on how she’s incorporated these considerations in other facets of her platform, including her plans for housing and jobs. With regards to housing, Warren wants to empower people with disabilities to be able to live independently. She also mentioned she will “make sure that the people who want to bid on federal contracts are treating people with disabilities fairly and paying them fairly” — a call to end the 14(c) provision of the Fair Labor Standards Act, which allows federal contractors to pay less than the statutory minimum wage to people with disabilities. Disability rights activists and others have been increasingly critical of 14(c), and ending the subminimum wage would allow workers with disabilities to receive the same compensation as their nondisabled peers, in turn giving us the potential to live independently and be fully integrated within our communities.

Warren’s entire disability rights plan is typically comprehensive, noting that disability issues affect all major areas of policy, especially education, housing, and employment. Yang’s platform specifically addresses care of people with disabilities and calls for the enforcement of the Americans with Disabilities Act, although it has been criticized for being limited and missing the many nuances of disabled life. He also has a specific autism policy, but it really only advocates for funding for early intervention. It misses the mark on the fact autistic people like myself — and Yang’s own son — have ongoing issues in education, employment, housing, and nearly every other factor that policy affects in daily life.

Disability should continue to be a major issue for voters going into 2020. The nonpartisan online movement #CripTheVote engages disabled people on policies and practices important to the disability community. Alice Wong, a disabled activist and one of the co-founders of #CripTheVote, previously told ABC News that "it may seem superficial to be mentioned by name, but having your community represented matters during these events.”

For me, hearing autism and disability mentioned in the debate was the first time I felt each of my identities was fully acknowledged. I have listened to candidates discuss women’s issues and banter about lawyers and policies — all things to which I have a connection. But this was the first time I had heard about people with disabilities.

Still, achieving the milestone of recognition is not enough. The candidates’ answers fell short in addressing the disability voting bloc and recognizing our full potential and humanity as voters, citizens, community members, family members, parents, and workers. Yang’s repeated use of “special needs” alienated disabled folks, while Warren referred to people with disabilities as “the least of thy brethren,” implying a somewhat lesser human experience.

I too took issue with Warren’s “least of thy brethren” comment, feeling disappointed by candidates echoing their perceptions that people with disabilities are weak. Regardless of how complex our needs and levels of support may be, we are no less human than others, nor should we be seen as second-class citizens.

People with disabilities are strong from facing a world that discriminates against us, objectifies us, or perceives us as less human than our nondisabled peers. We are voters, we are community leaders, employers and employees, students, family members, parents, activists, and individuals capable of different jobs and roles in all aspects of our society. If the world (including the polls), were more accessible, we would ultimately be viewed as more powerful.

Going forward, presidential candidates must acknowledge and celebrate our human value. It will only inspire the American public to do the same.