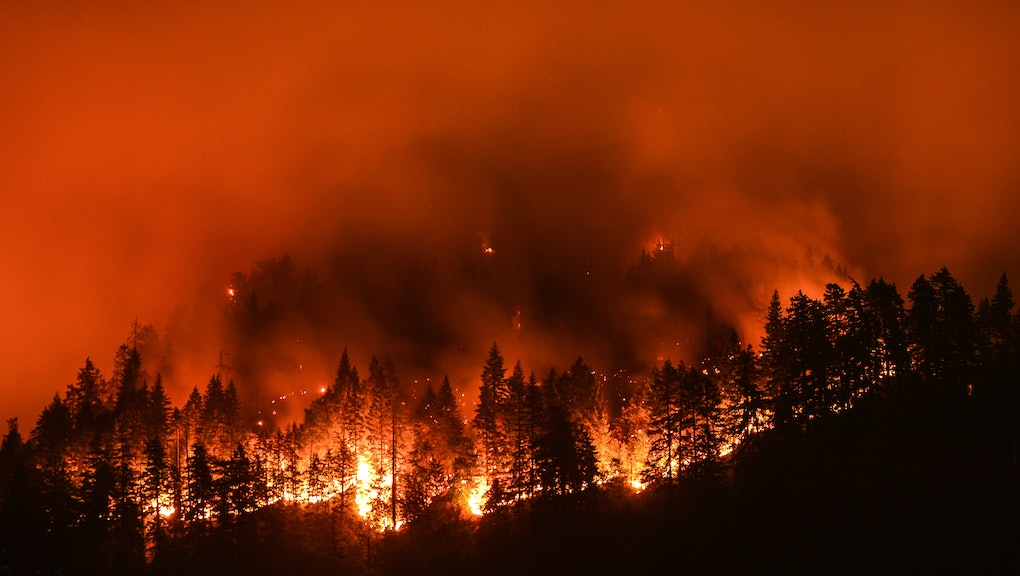 Throughout the month of October, wildfires have raged in California, putting thousands of people and their homes at risk. On Sunday, California Gov. Gavin Newsom declared a statewide emergency due to both the fires and the high winds in the area, which help the blazes spread rapidly. While Newsom's official proclamation only came Sunday, for weeks now Californians have been facing down massive fires and the related consequences, like power outages and supply shortages.

There are several blazes threatening different parts of the state. In Southern California, the Tick Fire near Santa Clarita has burned more than 4,600 acres, per CBS News, and led to the evacuation of tens of thousands of people. Early Monday morning, the Getty Fire broke out in Los Angeles, threatening affluent neighborhoods where celebrities like NBA star LeBron James reside. That blaze is threatening 10,000 structures, the Los Angeles Times reported, and has attracted 500 firefighters in the fight to save homes.

However, it's the Kincade Fire in Sonoma County, in the northern part of the state, that has caused the most damage so far. It's burned more than 66,000 acres and led to the evacuation of nearly 200,000 people, according to the governor's statement. Over 3,000 local, state, and federal personnel are responding to the Kincade Fire alone. In its fifth day, the fire is still just 5% contained.

Newsom's specific mention of "unprecedented high winds" is a reference to California's infamous Santa Ana gusts, which are common in the fall and play a huge role in the spread of wildfires. Wind can impact the speed, intensity, and direction of a fire, by throwing embers up into the air where they can then ignite dry hillsides. The winds can also make danger zones more difficult to predict and control, as they can change direction on a whim.

Currently, winds in California are at hurricane-level strength. According to NBC News, the Kincade Fire nearly doubled in size from Sunday afternoon to Sunday evening due to sustained winds above 70 mph and gusts that topped 100 mph. In Southern California, a Santa Ana wind event began Sunday and is expected to last through midweek, the Los Angeles Times reported, with gusts near 60 mph and single-digit humidity levels making for highly combustible conditions.

In efforts to avoid sparking wildfires, California's largest utility, Pacific Gas & Electric, began shutting off people's power. About 738,000 customer accounts, which represent up to 2 million people, lost their service in what Vox described as a "planned, deliberate blackout unprecedented in the history of the nation's electrical system."

PG&E's equipment has been responsible for wildfires in the past. The company notably admitted that its equipment was likely an ignition point for the 2018 Camp Fire, the most destructive blaze in California history. PG&E was also responsible for a 2015 fire outside of Sacramento that destroyed more than 70,000 acres and resulted in two deaths.

The problem is that PG&E has failed to give residents much notice ahead of the shut-offs. Losing power may not be a big deal to some, but for disabled people who are dependent on powered medical equipment or who need to refrigerate medication? It can be life-threatening.

"I'm outraged, because it didn't need to happen," Newsom said during the first preemptive outages earlier this month. "They're in bankruptcy because of their terrible management going back decades. They created these conditions."

Although the National Interagency Fire Center reported that California saw about 7,000 less wildfires from Jan. 1 to Oct. 4 of this year compared to the same period in 2018, that doesn't mean there wasn't still a lot of damage. About 4.4 million acres were burned in the 2019 period.

The wildfire season isn't over yet, and the Kincade Fire, Tick Fire, and Getty Fire all continue to burn. Los Angeles Mayor Eric Garcetti urged residents to heed evacuation warnings and be prepared when they come, as sometimes people may have only minutes to safely leave an endangered area. "Get out when we say get out," Garcetti said. "The only thing you cannot replace is you and your family."