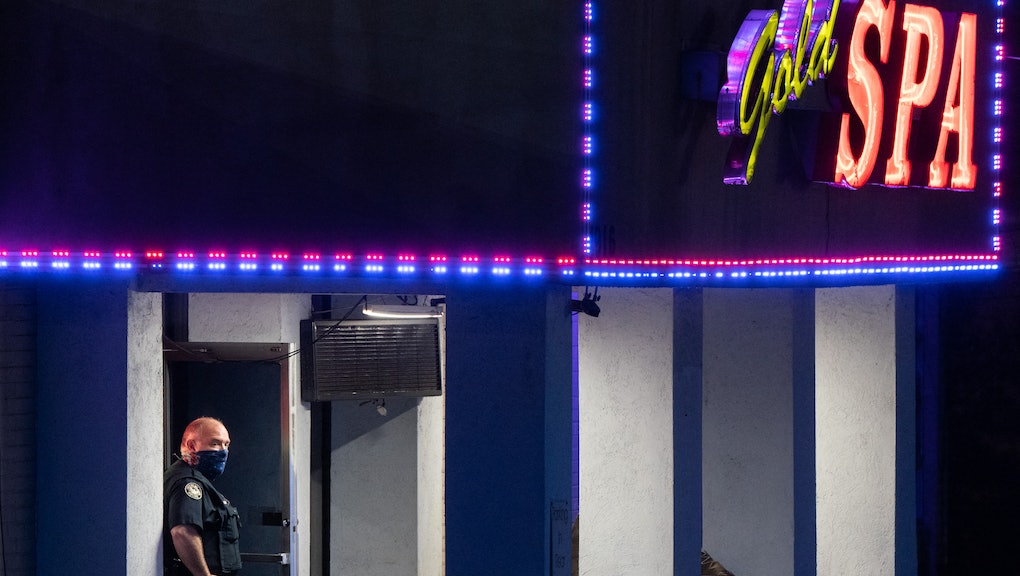 At least eight people, including six Asian women, were killed Tuesday evening in the Atlanta area during a series of shootings at three separate massage parlors. At least one other person was injured during the attacks. The shootings appear to have been a targeted attack against the Asian-American community, which has seen a series of racially motivated acts of violence in recent months.

According to The New York Times, the first shooting took place around 5 p.m. at Young’s Asian Massage in Acworth, Georgia, a suburb of Atlanta. Four people, including two Asian women, one white man, and one white woman, were killed. A Hispanic man was also injured during the shooting. About 45 minutes later, a second shooting was reported at Gold Spa in Atlanta, about 30 miles from Young’s Asian Massage. Three women, all of Asian descent, were killed. Another parlor directly across the street, Aromatherapy Spa, was attacked next: One person, an Asian woman, was found dead there. The Times reported that an official from the South Korean Consulate in Atlanta confirmed Wednesday that four of the eight victims in the shootings were ethnic Koreans.

The alleged shooter was identified by authorities as Robert Aaron Long, a 21-year-old from Woodstock, Georgia. He was taken into police custody Tuesday night after being arrested in Crisp County, about 150 miles south of Atlanta. Long was arrested after his Hyundai Tucson was spotted in security footage outside one of the parlors.

On Wednesday, authorities confirmed that they had charged Long with eight counts of murder across the three shootings. They also said that he had allegedly been planning to travel to Florida after the attacks in Georgia, presumably to bring more violence.

Little is known about the alleged murderer at this point. The Daily Beast spoke to one of his former high school classmates, who described him as a hunter and the son of a "youth minister or pastor." An Instagram profile that is believed to have belonged to Long had the tagline, "Pizza, guns, drums, music, family, and God. This pretty much sums up my life. It’s a pretty good life.”

It is not certain yet if Long intentionally attacked the massage parlors in an effort to target Asian-Americans. Law enforcement said Wednesday that Long suggested the attacks were borne out of a struggle with sexual addiction, and that he had possibly visited the spas in the past. But even the language authorities used to substantiate that claim — that the businesses were a "temptation for him that he wanted to eliminate" — was an example of bizarrely bending backward to avoid calling the attacks racist while also ignoring the long, dangerous history of hypersexualization of minorities, and particularly Asian women. Additionally, a local Korean-language newspaper wrote that an employee at Gold Massage Spa told their reporter that Long said he would "kill all the Asians" when he entered the building. Per the paper, the employee was inside the spa during Long's attack.

There have been nearly 3,800 reports of hate incidents targeting the Asian-American community over the course of the last year alone, according to Stop AAPI Hate, a group documenting violence against Asians. Many of those incidents involved brutal acts of violence and in some cases resulted in the death of the victims. Former President Donald Trump spent much of his last year in office fomenting hate against Asians by blaming them for the coronavirus pandemic; on Tuesday night, he referred to the virus as the "China virus" while speaking on Fox News. His xenophobic rhetoric was previously directly tied to a hate crime in 2019 that targeted Hispanic individuals.

"This latest attack will only exacerbate the fear and pain that the Asian American community continues to endure," Stop AAPI Hate said in a statement.

A number of politicians have spoken out following the shooting, offering their support for the victims while condemning the act of violence. “My heart is broken tonight after the tragic violence in Atlanta that took eight lives,” Rev. Raphael Warnock, one of Georgia's two new Democratic senators, tweeted. “Once again we see that hate is deadly.” Georgia Gov. Brian Kemp (R) said in a tweet, “Our entire family is praying for the victims of these horrific acts of violence.”

White House Press Secretary Jen Psaki indicated that President Biden was aware of the situation and has been in touch with federal law enforcement, including the FBI. Other cities, including Seattle and New York, have indicated they will increase police activity to try to prevent similar attacks on their Asian-American communities. Vice President Kamala Harris, herself of Asian descent, said in brief remarks Wednesday morning: "I do want to say to our Asian American community that we stand with you and understand how this has frightened and shocked and outraged all people."

This article was originally published on March 17, 2021

More like this
A state-by-state list of racist Confederate monuments that have been removed so far
By Vanessa Taylor
Nancy Pelosi took a stand on the Jan. 6 committee, and it left Republicans whiny as hell
By Rafi Schwartz
Guess how much Trump's companies made during his presidency!
By Rafi Schwartz
Stay up to date