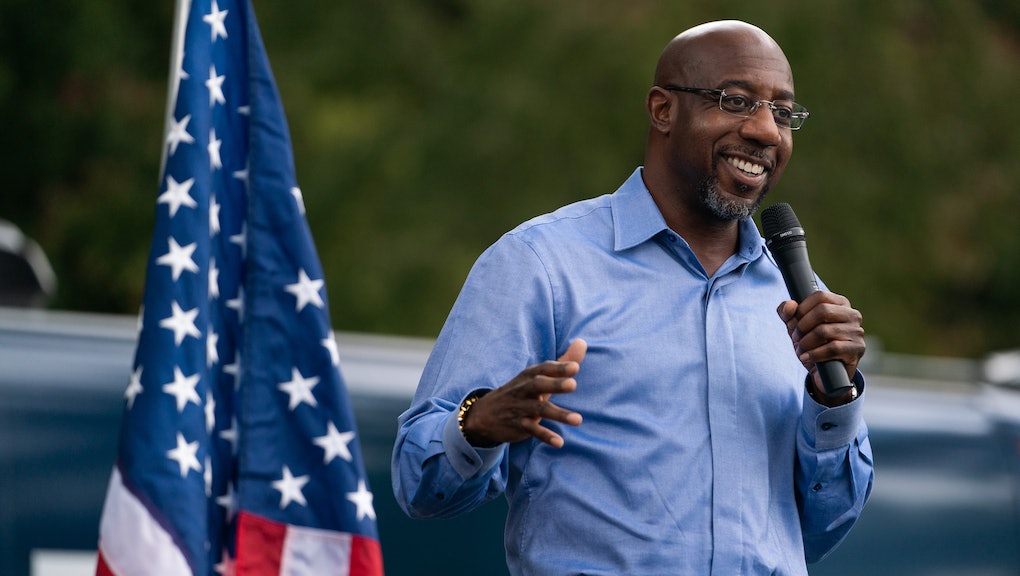 Georgia has been the Democrats' white whale for years now. Once a solid-red state, Georgia is now a bona fide campaign destination for Democrats, and this cycle is hosting not one, but two competitive Senate races. In one, Rev. Raphael Warnock, the pastor at the Ebenezer Baptist Church in Atlanta that Martin Luther King Jr. once presided over, has emerged to lead a field of roughly 20 candidates, including two Republican opponents who currently hold office and one Democrat with a famous name.

Warnock's race is so crowded because it's a special election. The incumbent, Sen. Kelly Loeffler (R), was appointed to her post in January to replace retiring Sen. Johnny Isakson (R). The contracted election schedule meant there would be no primary cycle for the race, hence the stuffed ballot. Warnock, though, has managed to break away from the field, partly due to Loeffler and Rep. Doug Collins splitting the Republican vote and the Democratic Party coalescing around his candidacy rather than that of Matt Lieberman, the son of former Sen. Joe Lieberman (D-Conn.). He's also gotten a boost from some notable figures — like much of the WNBA.

Still, if he fails to win 50% of the vote next week, then Warnock could see himself in a runoff election early next year — which could be a blow to his currently surging candidacy. Like Jaime Harrison in South Carolina, Sara Gideon in Maine, and Stacey Abrams before him in Georgia, Warnock has a lot of Democratic hope riding on his shoulders. Mic talked to Warnock about his campaign earlier this month, and here's what he had to say. (This interview has been lightly edited and condensed for clarity.)

Mic: You’ve been running in a race with 20 other people. How does that change the race? How do you distinguish yourself?

Warnock: So, what I’ve been doing is leaning into my message. And it is a message that I’ve been carrying for years, focused on health care reform, the dignity of work, criminal justice reform, voting rights, and the overall moral health of our nation. So I intend to be myself in this race. I’m a pastor who has taken the extraordinary step of actually running for political office fully aware of the perils involved, but I’m willing to go into the fray because I care so much.

Mic: A big part of your campaign has been that you are a Georgia man. You’re born and raised there; you’ve been deeply entrenched in the community for years. How have you used that experience to elevate your message?

Warnock: I was born and raised in Savannah, Georgia, one of 12 children in my family. I’m number 11 and I’m the first college graduate in my immediate family. My amazing American story of moving from the projects to King’s pulpit is paced with Pell Grants, low-interest student loans, and work-study jobs. And I’m running because it’s harder now for young people growing in struggling families than it was for me.

"This is, for me, a moral moment that cries out for moral leadership."

I see young people struggling just to get through school, the disinvestment we’ve seen in public education over the last few decades — I think a young person ought to have access to a good quality education regardless of their zip code. And then I see young people coming out of school loaded down with student debt, they have a mortgage before they get a mortgage. Their parents are saddled with difficulty in a state that has refused to expand Medicaid; we have 500,000 people in the Medicaid gap, and I’m running against two Republican opponents who want to get rid of the Affordable Care Act in the middle of a global pandemic.

So this is, for me, a moral moment that cries out for moral leadership. And humbly I offer myself up for public service.

Mic: One of the things that has been part of your story is your connection with John Lewis. Can you speak a little bit to how his legacy and also the legacy of Georgia, as a center of the civil rights movement in America for decades, has shaped you and shaped your candidacy?

Warnock: I first met John Lewis while I was a student at Morehouse College. He actually came to an event that the students had organized. We were all mesmerized by the eloquence of his life story, even more than the words that came out of his mouth was the power of his living sacrifice on behalf of justice-making and truth-telling. I never imagined that years later I would become his pastor at Ebenezer Baptist Church.

As I was preparing to officiate his service, I thought about the fact that the whole nation paused — not for one day, for about six or seven days — to say farewell to a congressperson. When in American politics has that ever happened? The Congress has not enjoyed high favorability ratings, and yet you have this congressman who, in the midst of a news cycle that is chock-full of events, commands, by the power of his moral witness, our attention. As we remembered him, they moved his body from Selma to Montgomery to Washington, D.C., back to Atlanta with the kind of pomp and circumstance that you generally see for an American president.

How is it that the “boy from Troy” as he called himself received that kind of honor? It is because people are hungry for the kind of leadership that John Lewis represented. We have enough transactional politicians in Washington. He was a transformational figure who took his passion for justice to the Congress. And that’s what I’m going to try to do. I can’t be John Lewis, I won’t even try to walk in his shoes, but to stand on his shoulders and take integrity justice-making and truth-telling to the Congress, this time on the Senate side. If he was the conscience of the Congress, and Congress could certainly use a conscience, I intend to try to speak to the soul of the Senate.

Mic: What social justice legislation that’s currently in front of the Senate would you support? Would you sign onto the reparations bill to establish a commission to study that issue? Part of your platform is restoring the Voting Rights Act. What legislation would you support to that end?

Warnock: We should study it, and we should find ways to come to terms with America’s age-old and continuing challenges around race.

But I think that there are public policy proposals that would lift all boats. Which is why we need to strengthen the Affordable Care Act. We need to make sure that people with pre-existing conditions are not at risk of losing their coverage as they are right now in the Supreme Court decision that will be before us in a few weeks. We need to make sure that folks on Medicare are not paying twice as much as they need to on prescription drugs because we prohibited ourselves from negotiating the price with big pharmaceutical companies. We need to raise the minimum wage and give people a livable wage and the ability to retire with dignity. And we need to make sure that young people regardless of their income have access to a good quality public school education, and that if they have a dream like this kid did, growing up in Kayton Homes, the projects, to attend a college or university, junior college or vocational school, that there’s a way laid for them to do that that does not leave them loaded down with debt.

And if we do that, that will go a long way to helping all kinds of people all across the state of Georgia.

Mic: Just to clarify, when you say “study it” do you mean study reparations specifically?

Mic: Georgia is one of the states that has been long entrenched in the fight over reproductive rights. There was a six-week abortion ban passed just last year in Georgia. How would you protect reproductive access for Georgians?

Warnock: I am for reproductive choice. And I think that a patient’s room is too small and cramped of a space for a woman, her doctor, and the United States government. So I intend to defend reproductive choice and also I hope to encourage us to work on the issues in women’s health that we all ought to be able to agree on. The United States of America has exceedingly high rates of maternal mortality and infant mortality. And it’s really mind-boggling given how medically advanced we are.

Warnock: Yeah. And it’s 3-4 times that rate for Black women. Black women are 3-4 times more likely to die in or as a result of childbirth than their white counterparts. The disparity continues even when you control for income and insurance. So people of moral bearing should be deeply offended by that disparity, and that we would let that abide speaks to a spiritual crisis that I hope to address as a pastor among peers in the United States Senate.

Warnock: Here’s the thing: The disparity exists even when you control for income and insurance. So there is clearly — this is what we mean when we talk about systemic racism and implicit bias. And I know that makes some people uncomfortable when you talk about it, but the data demands an honest look at what’s actually going on.

So part of what we need is, yes, to address the huge disparities in access to care between communities of color and other communities and poor people in general. But we also need to be proactive in increasing the pipeline that leads young Black children to medical school and health care careers. Because the data also shows that those disparities do decrease when there are more caregivers of color in the system providing the care.

Mic: Tell me what it was like to videochat with Sue Bird and the WNBPA when they were in Florida. To have the endorsement of basically an entire professional sports league is notable.

Warnock: Yeah. I was very honored to receive the endorsement of Sue Bird and the players of the Atlanta Dream and players all across the WNBA. [Ed. note: Loeffler, Georgia's incumbent Republican senator and Warnock's opponent, owns the Atlanta Dream and has been outspoken about her opposition to Black Lives Matter. Over the summer, WNBA players banded together to support Warnock in response.]

Here’s the thing: They represent the best of athletes who know that given their influence and platform, their voices can make a difference in the conversation. There is a noble tradition of athletes engaged in social justice that recalls the names of Muhammad Ali, John Carlos and [Tommie Smith] who stood up during the Olympics, and Arthur Ashe, Kareem Abdul-Jabbar, and more recently I would even add Venus and Serena [Williams] to that.

So I’m very proud of these young women. They know the work that I’ve been doing for years, standing up against police brutality, fighting for criminal justice reform. We found common cause in that work, and kudos to them. ... I don’t know that a candidate that ever gotten an endorsement from basically an entire league. It was helpful because it meant that we were having a conversation about these matters in spaces that you don’t always see — Sports Illustrated, Bleacher Report.

More like this
Supreme Court justices' political leanings: A guide to the 2021 court
By Vanessa Taylor
There are already 19 QAnon candidates running for Congress in 2022
By Rafi Schwartz
The history of the LGBTQ+ Pride flag, from the OG rainbow to Progress Pride
By Vanessa Taylor
Stay up to date