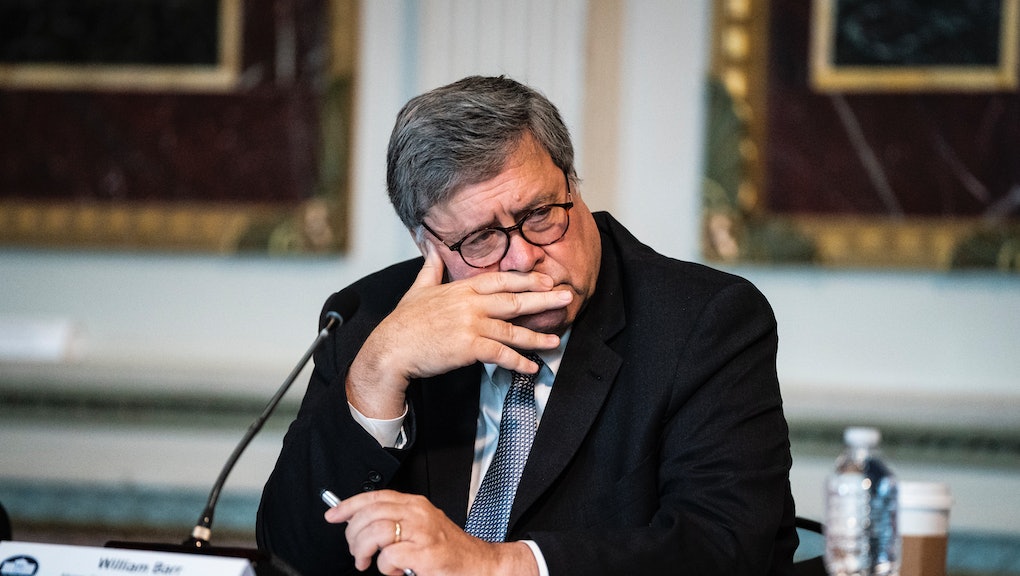 The Trump administration hasn't hesitated to make its qualms with coronavirus lockdown measures known. But this week, Attorney General William Barr claimed lockdowns are the "greatest intrusion on civil liberties" since slavery — a statement illustrating that, even as the pandemic rages on, federal officials are relying on a dangerous degree of historical revisionism to justify their continued lack of action.

While speaking at an event at Hillsdale College in Michigan on Wednesday, Barr focused a good portion of his speech on criticizing the Department of Justice and justifying his intervention in high-profile cases. However, the attorney general's most egregious remark came toward the end of the event.

During a Q&A session, Barr told attendees, "You know, putting a national lockdown, stay-at-home orders, is like house arrest. Other than slavery, which was a different kind of restraint, this is the greatest intrusion on civil liberties in American history."

A dunk on lockdown measures is no surprise coming from Barr. In April, he threatened to sue states that continued to impose social distancing guidelines and claimed stay-at-home orders were "disturbingly close to house arrest."

There are a number of issues with his latest statement. First, Barr's continued comparison of lockdown measures to house arrest ignores the violence of actual e-carceration. For most people, being asked to stay inside during a deadly pandemic does not compare to the experiences of incarcerated people who, through electronic monitoring, become surveilled and imprisoned within their own homes.

Second, you don't have to look far to find actual, recent infringements on people's civil liberties. This past summer was one defined by uprisings in which protesters were routinely brutalized by police through measures that left some blinded and others facing health consequences from the use of chemical weapons like tear gas. Mysterious federal agents have detained protesters, and authorities used surveillance tactics such as dispatching drones, helicopters, and airplanes to watch protests.

But rather than address those violations in his speech, Barr targeted Black Lives Matter activists. “Who can quarrel with the proposition, ‘Black lives matter?’ But they’re not interested in Black lives," he said. "They’re interested in props — a small number of Blacks who are killed by police during conflict with police, usually less than a dozen a year who they can use as props to achieve a much broader political agenda.”

Barr's comments about lockdown measures drew vast criticism, including a swift response from House Minority Whip Jim Clyburn (D-S.C.) who criticized it as one of the "most ridiculous, tone-deaf, God-awful things I've ever heard." During a CNN interview, Clyburn said, "It is incredible the chief law enforcement officer in this country would equate human bondage to expert advice to save lives. Slavery was not about saving lives. It was about devaluing lives."

Ironically, Barr's comment on coronavirus lockdown measures follows a report from the World Health Organization (W.H.O.) of the highest one-day increase in global coronavirus cases since the pandemic began. While the New York Times reported there's been a decrease in average daily cases in the U.S. compared to two weeks ago, the country still isn't looking good. Per W.H.O., India, the United States, and Brazil are seeing the largest numbers of new infections globally. And just last week, Anthony Fauci warned that the changing seasons will bring even more strife, stating in a panel discussion at Harvard Medical School that "we need to hunker down and get through this fall and winter because it's not going to be easy."

More like this
Arkansas's governor is very sorry he engineered a COVID surge in his state
By Rafi Schwartz
Sarah Sanders is here for the vaccine — as long as she can credit Trump for it
By Vanessa Taylor
More than 200 GOP lawmakers asked the Supreme Court to overturn Roe v. Wade
By Rafi Schwartz
Stay up to date