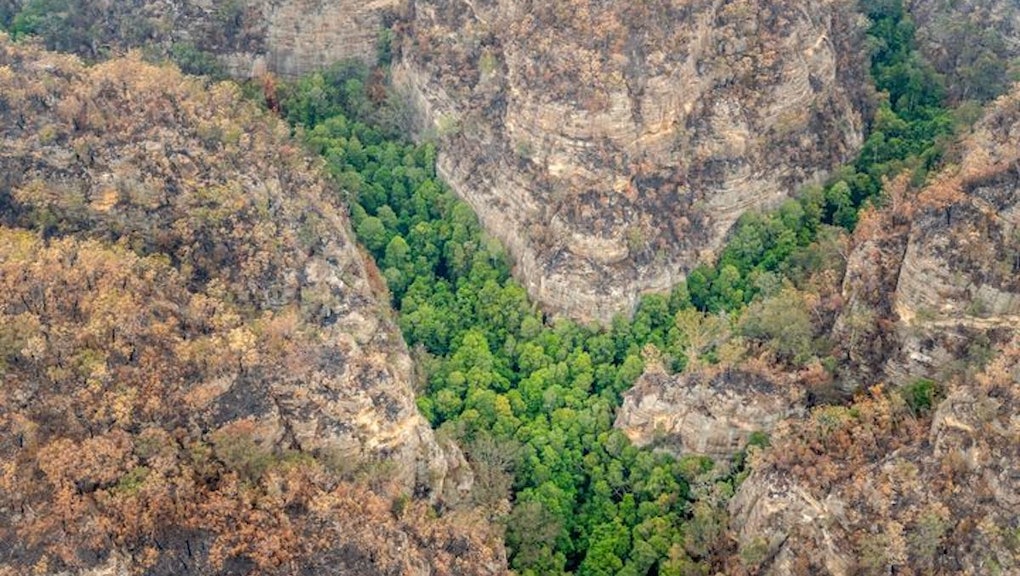 Though seemingly endless, massive bush fires continue to plague Australia, there's one spot of hope that's still managed to come from the destruction. On Thursday, officials announced that a series of "dinosaur trees" from a 200-million-year-old species were actually spared from Australia's ongoing blazes. The trees, known as Wollemi pines, are an endangered species located only in the Australian wild, and miraculously, they were kept from harm as firefighters worked tirelessly to water-bomb the area and form an irrigation system to save them. In a situation where everything can feel as though all is lost, at least these trees had a fighting chance at making it out of the fires unscathed.

"Wollemi National Park is the only place in the world where these trees are found in the wild and, with less than 200 left, we knew we needed to do everything we could to save them," said New South Wales Environment Minister Matt Kean in a statement Thursday. "The pines, which prior to 1994 were thought to be extinct and whose location is kept secret to prevent contamination, benefited from an unprecedented environmental protection mission."

Unfortunately, some of the trees did end up charred a bit by the encroaching flames, so they didn't come out entirely unscathed. However, for the most part, the trees were spared an untimely death, and the world continues to have one additional species of tree that hasn't gone extinct. The rest of the park, however, wasn't so lucky.

"It was like a military-style operation," Kean told the Sydney Morning Herald this week. "We just had to do everything."

The area the team concentrated on is located in a remote gorge where a natural concentration of the Wollemi pines sprang up 200 million years ago. They were mistakenly thought to be extinct, in fact, up until around 30 years ago, when a park ranger stumbled upon them and found them a bit unusual. He ended up taking a sample of the trees to be identified, and researchers determined their origin. Now, their location in a 2,000-square-mile national park in Australia is kept secret to minimize further contamination or issues springing up from people who might get curious or accidentally damage the delicate greenery.

Luckily, firefighters aren't still the only line of defense against the blazes. Heavy showers and thunderstorms have cropped up throughout some of the more intense fire zones across Australia. As a result, a merciful amount of rain is falling along the hot, dry conditions that have stoked the bush fires in the first place, with some areas soaking up over two inches of rain on Wednesday and Thursday.

According to weather reports, the rain is expected to continue to fall over the weekend across New South Wales and Queensland. While some of the areas that need it most will miss out on the nourishing rains to help beat back the fires, the wet weather overall is a welcome change from the drought conditions in the area.

Firefighters are understandably excited about the developments, and the country in general is likely appreciative of the potential respite from additional blazes continuing to burn. With news of the Wollemi trees mostly safe from harm, and powerful rains moving through the area, Australia's greenery may just have a fighting chance yet. In the meantime, though, continuing to donate to relief efforts is the next best thing.