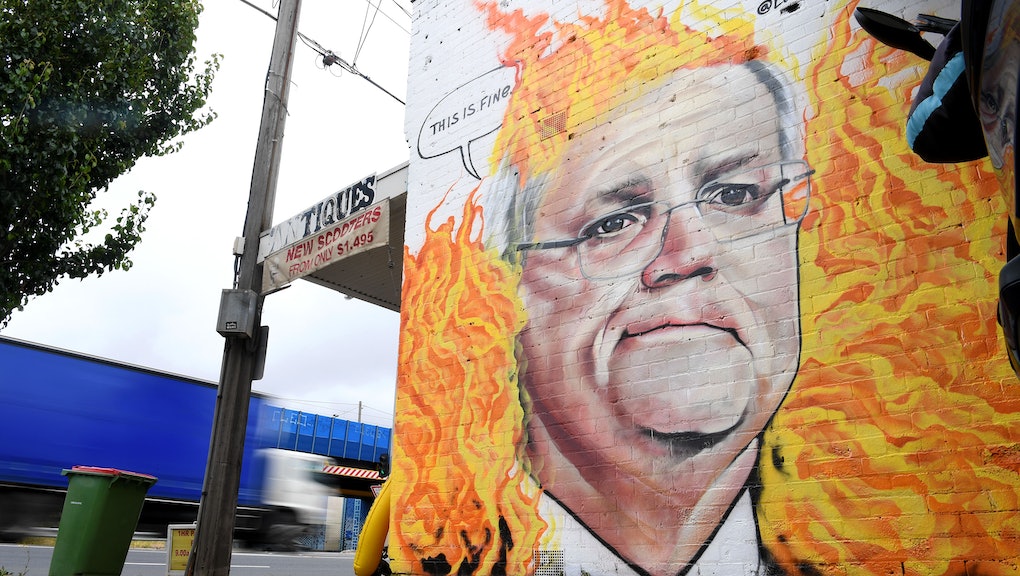 Australia has been engulfed in endless, destructive bush fires for months now, and there is little sign that the flames will dissipate any time soon. The conditions that have led to Australia's seemingly endless blaze were laid by climate change: unseasonably hot temperatures scorching the continent and unprecedented levels of drought resulting in water shortages. These conditions were likely unavoidable without turning back the clock and ensuring that the entire planet takes seriously the threat of climate change and cuts back on their carbon emissions. But those same conditions were also largely predictable. The failure by political leaders to take the warning signs seriously may not be the tinder that sparked Australia's fires, but it is in part the reason the flames continue to burn — and other nations that have similarly elected officials who doubt climate change could subject their citizens to a similar fate.

Climate change has long been a fraught topic when it comes to Australian politics. For years, media coverage of human-caused climate change — an issue on which there is a scientific consensus that it is real — has been filled with undue levels of skepticism within the Australian press, particularly right-leaning publications owned by Australian-born media mogul Rupert Murdoch. Publications owned by Murdoch's News Corp are the three most circulated print offerings in the country and account for nearly two-thirds of all metropolitan circulation. A 2013 report by the Australian Centre for Independent Journalism found that nearly one-third of all climate coverage in Australia either outright rejected the scientific consensus or sought to cast doubt on it. The study also found that more words were dedicated to rejecting the notion of human-caused climate change than was spent extolling the scientific consensus on the issue.

This type of coverage has an adverse effect on the population that reads it. Polling conducted by Ipsos found that the nation's public opinion has largely lagged behind the rest of the world when it comes to climate change. As little as a decade ago, just one in three Australians believed that climate change was largely or entirely human caused. Those figures have jumped up to 46 percent in 2018, but more than one in four Australians still do not believe that the average global temperature is likely to rise — compared to nearly four in five people in polling elsewhere in the world believing the temperature will continue to increase. Even as public opinion in the country has started to come around to the very real existence of climate change, those who doubt the extent of the effects have dug in their heels, even in the face of an environmental emergency. As bush fires run wild across the country, conservatives in the country have started digging up old articles containing falsehoods about the cause of previous bush fires — particularly one that blames "green ideas" for the flames. The article from 2009 has gotten so much traffic on the Sydney Morning Herald's website that the publication has put up a disclaimer noting that it is out of date and not relevant to the current situation. Not only that, the conceit of the article — that policies pushed by environmentalists are actually responsible for the fires — has been thoroughly debunked. Yet, these are the ideas that persist among some people while Murdoch-owned publications have avoided coverage of the fires.

The end result of this type of climate denialism and climate conspiracy theories is the issue being pushed to the background — or worse yet, being actively undermined by political leaders. Scott Morrison, the current Prime Minister of Australia, took office in 2018 as the leader of the Liberal party, but should not be mistaken by his party's name — he is, by all accounts, a conservative by his ideology, particularly when it comes to the environment, and the party aligns more closely to conservative politics in the U.S. than the name would suggest. Before raising to the leadership position, Morrison was Australia's treasurer and made his mark by showing up during a session of Parliament with a lump of coal in hand. "This is coal. Don't be afraid. Don't be scared. It won't hurt you," he said, while accusing environmentalists of having "an ideological, pathological fear of coal." He rose to prominence in the party after resisting the former leadership's attempts to set targets for reducing greenhouse gas emissions. Once in office, he ended Australia's contributions to the United Nations' Green Climate Fund — a global effort to make money available to finance green projects around the world, particularly in developing nations. While at a U.N. climate conference in Madrid, Morrison drew criticism from leaders around the world for attempting to use a loophole to meet Australia's greenhouse emissions reduction goals rather than actually do the work. When the populous does not believe in climate change — or does believe in it, but views it as a non-essential issue — it elects leaders that do not believe or care about climate change — and it gets an indifferent response when crisis hits.

Under Morrison, the response of the Australian government to the current devastation that it faces has been, at best, lackadaisical. His leadership has pushed budget cuts, including stripping $12.9 million from the fire and rescue budget in New South Wales, where the fires have been particularly deadly. According to independent Australian publication Crikey, the cut funds could have paid the salaries of nearly 500 firefighters, and purchased 70 firetrucks and thousands of pieces of equipment that could be used to help address the fires. In addition to cutting funding, Morrison has attempted to downplay the fires. While early bush fires started as far back as June of 2019, it took until January 2020 for a state of emergency to be declared. Morrison was vacationing in Hawaii when two volunteer firefighters lost their lives to the flames. When forced to actually address the crisis, Morrison has come up with little to truly express the urgency of the situation: “They are natural disasters," he said, but continued by stating, "They wreak this sort of havoc when they affect our country, and they have for a very long time. The best way to respond is the way that Australians have always responded.”

Morrison's response to the bush fires has drawn the ire of Australian citizens, who have finally come around to criticizing the environmental policy of the prime minister and conservatives who have not taken the threat seriously enough. While touring the country and meeting with people who have been affected by the fires, Morrison has been heckled, had citizens reject his handshake during photo opportunities and been presented with demands for additional funding to fire services. While these demands are well founded, they would have been even more valuable during the 2019 election, during which Australians had the opportunity to oust Morrison's Liberal party in favor of the more environmentally conscious Labor or Greens parties. Instead, they gained a seat in Parliament, ensuring more support for policies that neglect to address climate change and provide inadequate responses to environmental crises, even as they actively devastate the country.

The situation in Australia should serve as a harbinger for other countries — particularly the United States. Conservative voices much like those in Australia have spent decades downplaying the effects and threats of climate change in the U.S. despite the fact that as recently as the 1970s, it was a Republican president that established the Environmental Protection Agency. While Democrats are largely in lock step in believing that climate change is real and human-caused, and that it requires government efforts to address it, Republicans in the U.S. are largely skeptical. Nearly half of all self-identified conservative Republicans still believe the U.S. should prioritize expanding fossil fuel-based energy rather than focusing on renewable alternatives, according to Pew Research Center data. A majority of Republicans also believe that the government is already doing enough to address climate change — and one in four actually believe the government is doing too much. While much of the U.S. media relies upon the scientific consensus that climate change is real, research has found that conservatives often seek out information that support their climate skepticism, selectively choosing sources that adhere to their ideals rather than seeking out science-backed data. A similar phenomenon has taken hold in Canada, as well, where a recent study published by the Angus Reid Institute found that just 35 percent of conservative voters in the country believe climate change is human-caused.

Climate change shouldn't be an issue that causes this type of divide — it is not a topic that necessitates being debated as a cultural issue. But conservative-driven climate denialism — given outsized voice in media that either favors that view or attempts to provide "both sides" coverage despite a scientific consensus on the issue — has managed to sow enough doubt in the minds of a large portion of the population in a number of major nations. When this denialism takes hold, it results in policies that either do not adequately address the climate crisis that we face or actively choose to ignore it, implementing changes that worsen conditions, produce more emissions and contributes to the rise in global temperature. In Australia, it has taken the form of Scott Morrison, who has denied the effects of climate change and allowed his beliefs to erode the government's response to the devastating bush fires destroying land, livelihoods and entire ecosystems. In the United States, it has taken the form of Donald Trump — one of the world's most prominent climate change deniers and a man who has all sorts of misguided or flat-out wrong ideas about the environment that now serve as his government's guiding principles. Should America be faced with a climate crisis similar to that of Australia's it is likely that Trump's response would be equally apathetic. He would not see it as an environmental disaster that requires a change in course, and he would be unlikely to change any of his policies that have actively contributed to worsening pollution in the country and increased greenhouse gas emissions.

A failure to understand the effects of human-made carbon and greenhouse gas emissions dating back more than a century has put us in the situation that we are in today, facing more extreme weather events and adverse effects of climate change. But failing to understand that now should be viewed as negligence rather than ignorance. Choosing to not believe climate change is real or failing to believe it presents a threat to our planet requires choosing to ignore scientific consensus and expert voices. Making that choice will result in leadership that similarly does not care or believe in climate change and will make decisions that may actively worsen conditions of the planet for current and future generations. It will also result in a failure to properly address environmental disasters when they occur because they will not be viewed as the crises that they are. The result of this line of thinking is playing out in Australia right now. Without sufficient education and action, it could happen elsewhere in the future — including in the United States.