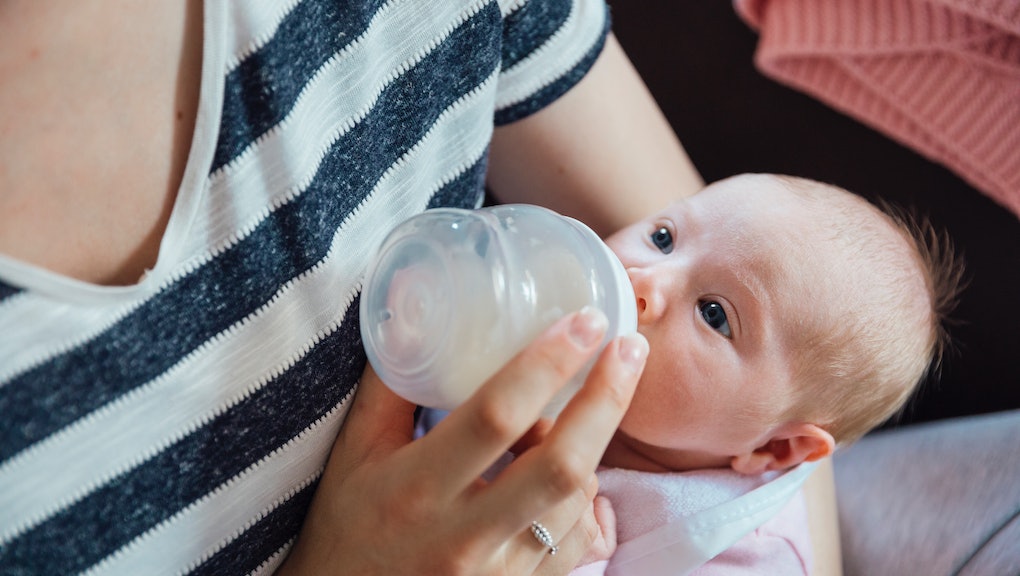 We have a problem with microplastics. They're in the ocean, in the soil, in the air, and in the food we eat. Health researchers don't yet know what the consequences of absorbing these microscopic plastic particles are or what it could mean for our bodies. But a shocking report published Monday in Nature Food, which found the average bottle-fed infant is drinking an estimated 1.5 million particles of microplastics per day, has underscored the need for more research into its impact.

The problem comes from plastic baby bottles. About 82 percent of the global market for baby bottles are made from polypropylene, a super common plastic used to make many consumer goods.

Researchers took these bottles and prepared baby formula using the guidelines set by the World Health Organization (WHO). These instructions call for sterilized bottles and hot water — heated to at least 158 degrees Fahrenheit — to be mixed with the formula before being cooled and used for feeding. This prevents bacteria from infecting the milk.

However, the team found that the plastic bottles were essentially "flaking" off into the milk due to the heat and shaking part of the process.

To make a comparison, the scientists made formula using both room temperature water and the recommended hot water. While room temperature formula still shed "hundreds of thousands of microplastics," the hotter formula released anywhere from 1 to 16 million particles per liter, study co-author John Boland told NPR. In addition to microplastics, there were also even smaller 'nanoplastics' that were simply too numerous to count.

The researchers then used data from their experiment, sales data on baby bottles, and breastfeeding rates from three-fourths of the global population to estimate how many particles of microplastics infants would consume, on average, within their first year of life. They landed on 1.5 million particles per day.

But even this number depends on where you live. Infants in countries that have lower breastfeeding rates, usually richer countries like the U.S., might be drinking over 2 million plastic particles per day, the study noted. Countries that prefer using glass bottles will see less microplastic in their baby formula as well.

Microplastics are everywhere, so the researchers weren't too surprised to find them in baby formula. But they were very surprised by the particle amount.

Boland told The Guardian that the team was "absolutely gobsmacked" by the high number. "A study last year by the World Health Organization estimated adults would consume between 300 and 600 microplastics a day — our average values were on the order of a million or millions."

This, he stated, called for more "health studies to understand the implications." While it's likely many microplastics could leave the human body as waste, it's also likely that an amount could be absorbed into the bloodstream or our organs, where they can stay and release chemicals or possibly cause abrasions. Much more work needs to be done to find out how these plastics affect both adults and babies. "We're already working with colleagues to look at what buttons in the immune system these particles begin to press."

Despite the terrifying finding, Boland emphasized that he didn't want their study to make parents feel ashamed or panicked.

"The last thing we want is to unduly alarm parents, particularly when we don't have sufficient information on the potential [health] consequences," he said. However, he and the rest of the research team believe regulators need to "reassess the current guidelines for formula preparation when using plastic infant feeding bottles."

The team encouraged any concerned parents to take additional steps to reduce the amount of microplastics in baby formula.

First, clean and sterilize the bottle in hot or boiling water as recommended. Then, the researchers suggest boiling more water in a non-plastic container, cooling it, then using that cooled water to rinse out the bottle three times. This flushes out some of the possible microplastic flakes that could be in the bottle after getting washed with hot water.

For formula preparation, the team suggests heating water, mixing in the formula, and shaking them together in a non-plastic container like glass. Then, let it cool down before pouring it into the clean bottle.

Boland doesn't recommend reheating formula or breast milk in the microwave. It can create areas where there's extremely hot liquid within the plastic bottle, which results in more microplastics. For parents who want to be rid of plastics altogether, glass bottles may be an option.