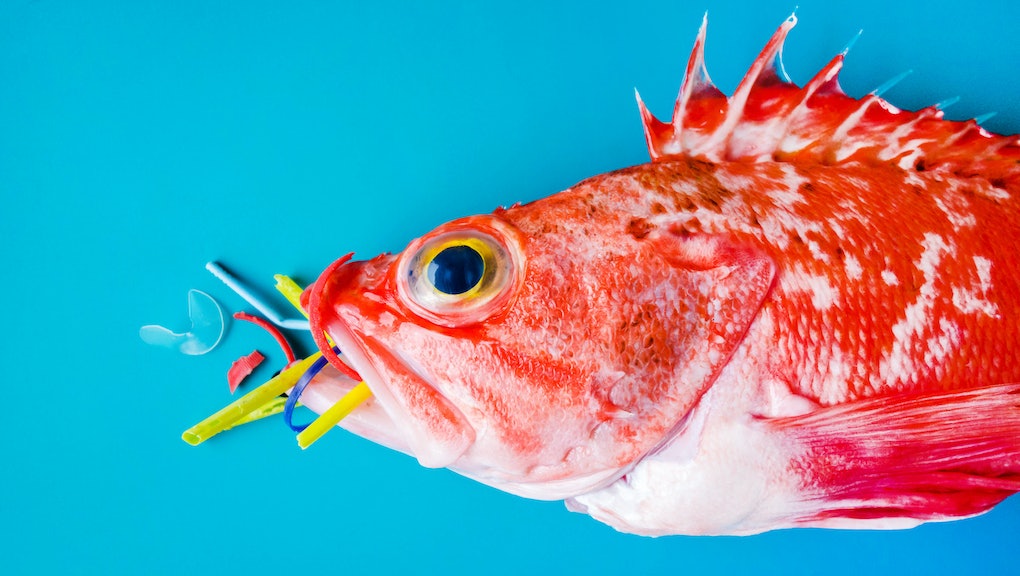 Microplastic pollution is everywhere. How concerned do we need to be?

Take a deep breath. Go on, exhale the pain of the day away. Now inhale. Feels good, right? Your lungs are filling with air, you're revitalized. Time to roll up your sleeves and get back to work (or whatever you were doing before you clicked this.) Get back to your normal routine, secure in the knowledge that you just breathed in a ton of tiny pieces of plastic. Yes, you read that correctly. Welcome to the wonderful, admittedly terrifying world of microplastics.

What are microplastics, anyway?

According to NOAA's National Ocean Service's official definition, microplastics are "small plastic pieces less than five millimeters long which can be harmful to our ocean and aquatic life." They're also a major contributing factor in the world's environmental downfall, and a grave concern for anyone concerned with sticking around on the planet for the next, oh, few hundred years.

"Microplastics have invaded the world," Heather B. Patisaul, professor of biological sciences, North Carolina State University, tells Mic. "We are ingesting and inhaling microplastics everyday. Anyone who doesn't want to be exposed to plastic every day should be concerned," she explained.

There are two main types of microplastics: primary and secondary. Primary microplastics are those that were engineered to be tiny, such as the microbeads found in body scrubs or toothpastes. Meant to help exfoliate skin or enhance the abrasive power of substances, these microbeads are typically made out of polyethylene, a type of plastic that readily ends up in rivers, lakes, and oceans as soon as your bath or tooth-brushing session has ended. As a result, these small spheres have been banned in several countries, including the United States. Startlingly, they only comprise around 2% of microplastics found in the world, along with others found in cosmetic products.

Secondary microplastics start out as much larger objects. These encompass pieces of plastic that simply break down over time. An old pair of sunglasses tossed into the dump that have been chipped into nothingness, the remnants of plastic bags, and other types of debris can all be classed as secondary microplastics. There's also a third category that can be sorted into a class all its own, somewhere between the primary and secondary plastics: it includes items like broken-down materials from tires, or the debris from washing synthetic fabrics. But no matter what "category" of plastics we're seeing more of, all of them eventually pose a threat.

"All plastics eventually break down into microplastic," Patisaul says, which is a discouraging thought when it comes to how many products we use on a daily basis that contain the material. "Manufacturers release some and garbage breaks down into others, all plastic on Earth becomes microplastic. If you used plastic today, it will become microplastic."

Microplastics have even been found as far away as the Arctic Ocean, despite the fact that humans rarely travel out that far.

How are microplastics harming the environment?

It's all part of a problem we already know exists – up to a point, anyway. For instance, we know that all the 2-liter bottles, grocery bags, hangers, and straws that litter our beaches and reside in our growing dumps aren't good for sustaining any sort of life. We obviously don't want Earth to grow into some sort of oversized "trash planet," but given that microplastics are out here doing massive amounts of damage when you can't even see them, it makes total sense that most people don't even register them as a threat. But you don't have to see them to know they're doing potential damage to your body and, as such, the environment.

The effects of microplastics on human health aren't widely understood yet, but there's no research to suggest that the inhalation of tiny pieces of plastic could be good for us in any way.

Humans aren't the only ones who must be concerned about breathing in these near-microscopic plastic pieces. The earth's wildlife continues to suffer, as the plastic can block the digestive tracts of insects and fish, then contribute to the deaths of entire populations as the creatures are ingested by other, bigger members of the food chain.

"It is infiltrating our water, our air, our oceans, our food supply — everything," explained Patisaul. "There is no space on Earth free of it. It's clogging the stomachs of sea life from the tiny to the huge, and killing species from sea turtles to whales." Earlier this year, in fact, a 26-foot sperm whale was found dead off the Sardinia coast with an alarming 48.5 pounds of plastic in its stomach.

"We've only begun to understand how it affects our own health but we know it's disastrous to wildlife so it's not a big leap to worry about ourselves," Patisaul concluded.

According to a paper by Nirban Laskar and Upendra Kumar from India's National Instituteaa of Technology, microplastics are one of the "greatest potential threats to marine environment for the whole world."

There is, perhaps, something of a silver lining despite the fact that we're essentially both breathing and drinking in plastics. According to an August 2019 report by way of the World Health Organization (WHO), the current level of microplastics in drinking water doesn't pose a health risk – yet...if the fact that we're still ingesting plastics period doesn't phase you. In fact, the WHO determined that larger particles and even smaller ones can pass through the body without being absorbed. However, the findings were based on a limited set of data points.

"We urgently need to know more", the WHO concluded. But what are humans to do to combat the issue right now before it worsens to the point where said plastics do become harmful?

"We have to cut back on what we're using," said Patisaul. "Pulling the microplastics out of body wash etc. helps but we have to cut back on our overall use. Anything anyone can do to cut out disposable plastics helps. That's the easiest," she assures Mic. "Carry your own silverware so you don't need to use disposable. I haven't used a plastic bag in 10 years other than my one for the TSA. It's not hard to start getting plastic out of your life if you start with the kitchen. Switch to glass. Or pick the plastic bottle you love and reuse it. Just use less."

Is there anything else we can do to stop all this?

There are other simple ways to cut down on plastic use as well, like opting for a reusable straw instead of asking for one when you get your daily Starbucks order. Purchase and wear clothing made of sustainable fabrics when possible. Use plastic-free containers to store your food. These all may seem like solutions that aren't going to do very much in the long run, but if everyone decided to join together and make a concentrated effort, we could make real change when it comes to keeping the current amount of microplastics where they are.

Of course, personal plastic cutbacks won't be enough to completely eradicate the material. In addition to individuals skipping straws once in a while and making lifestyle changes, there needs to be a series of changes on a business and regulatory scale. Simply put, the production of plastic has to stop or seriously scale back to really make a dent. Figuring out ways to better recycle and reuse the materials already created is also a necessary step.

"Just know that we've reached the point where we're eating and breathing our own trash," Patisaul says. "Literally. We have."