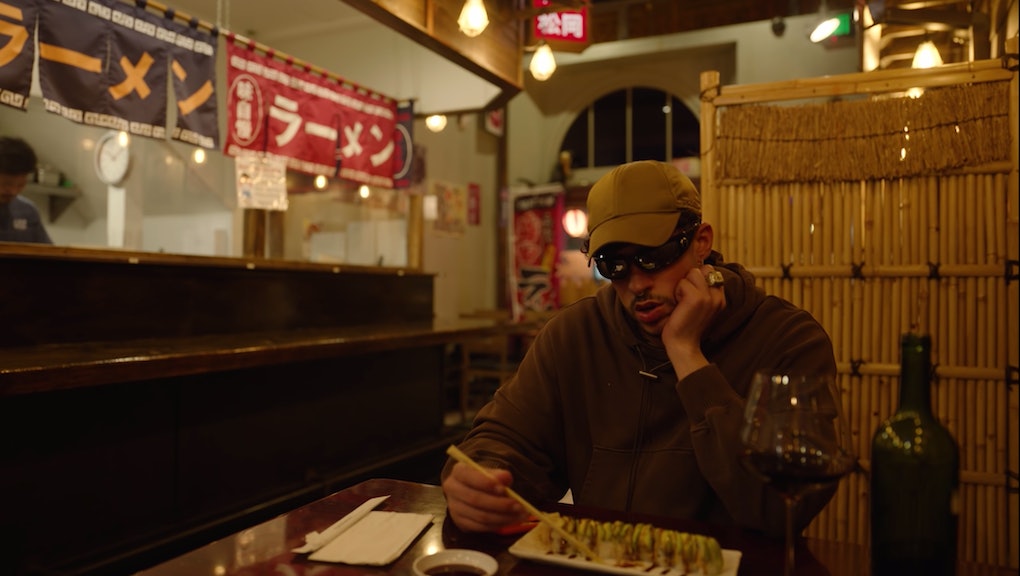 Bad Bunny is a lovesick puppy in the ‘Yonaguni’ music video

El Último Tour Del Mundo conquered the music charts in November, becoming Billboard‘s first all-Spanish #1 album. Now, Bad Bunny is back with his first solo single since then, "Yonaguni," and it's a catchy crooner about trying to forget your ex, but when you're drunk they're all you can think about.

Bad Bunny, whose given name is Benito Antonio Martínez Ocasio, sings that he'll hop the next flight to wherever his lady love is — which, for the purpose of this song, is Japan's westernmost populated island, Yonaguni. It's located 67 miles off the east coast of Taiwan, between the Pacific Ocean and East China Sea. The island is also tied to a myth about a place entirely populated by women.

In the video, Bad Bunny tries to drown his longing for one particular woman in wine, sushi and ramen. Then, he makes himself breakfast and walks a whole pack of dogs. He does martial arts, takes a "sip and paint" class, practices yoga ... but none of it helps. He can't stop thinking about "tu nombre, tu cara, tu risa y tu pelo," her name, face, smile and hair. At the end of the track, the Puerto Rican superstar delivers a final verse in Japanese.

It's not clear whether "Yonaguni" is a standalone track or part of some larger music drop. But the song is definitely a contender for song of the summer. Fans have to wait until 2022 to see Bad Bunny live, however, when he kicks off a 25-city North American tour.