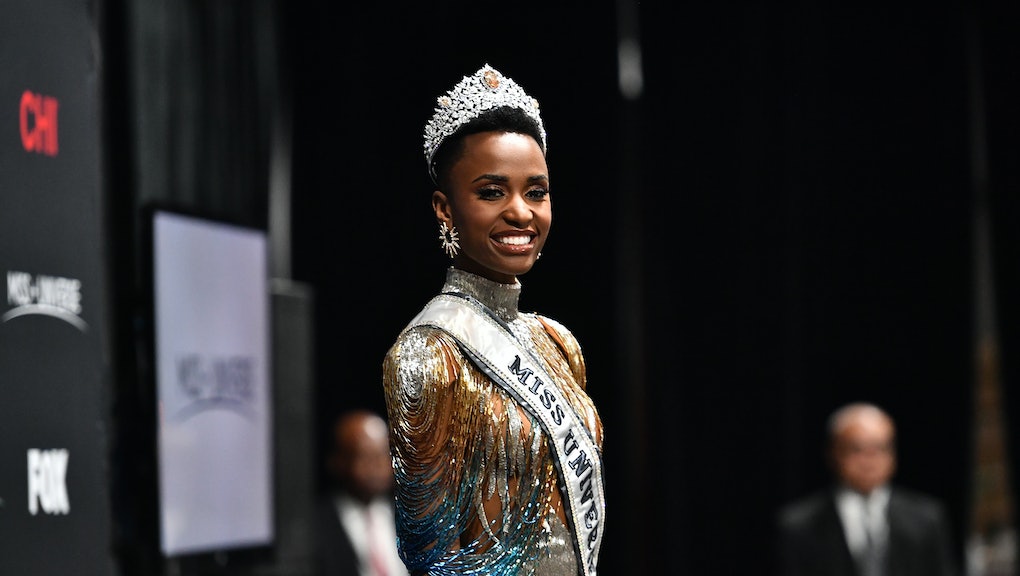 Beauty pageants like Miss Universe are making progress, but still have a long way to go

South Africa’s Zozibini Tunzi was crowned as Miss Universe 2019 on Sunday, beating out Miss Mexico and Miss Puerto Rico for the crown. Tunzi is the first Black woman to win the crown in the last eight years. In fact, all of the major pageant winners in 2019 — Miss USA, Miss Universe, Miss America, and Miss Teen USA — were Black women for the first time in pageant history.

For Tunzi, representing South Africa was particularly meaningful. During her last response, she detailed why she hoped it would inspire others. "I grew up in a world where a woman who looks like me — with my kind of skin and my kind of hair — was never considered to be beautiful," she said. "I think it is time that that stops today. I want children to look at me and see my face and I want them to see their faces reflected in mine."

Tunzi is a public relations specialist and model from East Cape, South Africa. She works with the United Nations organization HeForShe to campaign against gender-based violence across the globe. Before the Miss Universe pageant, she began a letter-writing campaign in South Africa, asking men to write love letters to women in order to raise awareness about gender-based violence in her country.

“Those letters will be inscribed onto ribbons of fabric that will be used to form a part of my national costume,” Tunzi shared on Twitter. “So in essence, I will be wearing a love letter from SA men to Women.”

While Tunzi’s win marks a historic year for the pageants — which have been criticized for being sexist, racist, and just generally bad — it’s hard to praise Miss Universe or any of the other events for finally, in what might be the Twilight of their existence, crowning Black women as winners. Ultimately, the contests were birthed as a tourist attraction in Atlantic City, and have only progressed beyond a parade of white women’s butts and breasts because of years and years of protests.

The Miss Universe that Tunzi won is quite different of course — this year there were seven women judges on the panel, there’s no longer a swimsuit portion, and there’s a greater focus on the accomplishments and goals of the panelists. As Miss Universe, Tunzi will travel the world representing a company that has a stated purpose to “empower women to realize their personal, professional and philanthropic goals through experiences that build self-confidence and act as catalysts for future success.”

That sounds good at least.