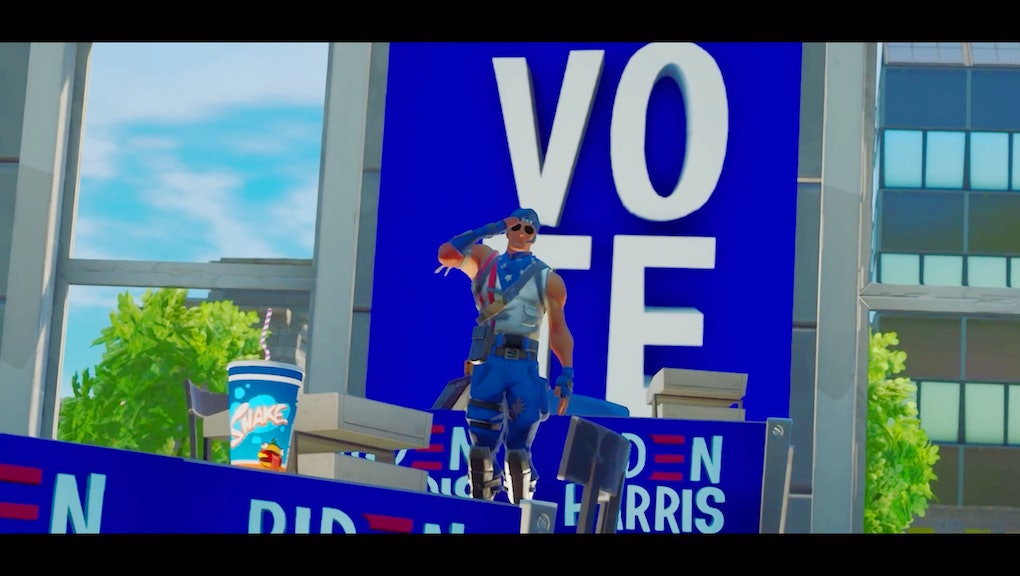 On Friday, the Biden-Harris campaign launched a new Fortnite map full of trivia about the candidates, information about their stances on certain issues, and mini games for players to explore as they roam the map.

Christian Tom, director of digital partnerships for the Biden-Harris campaign, told Mashable that the intent of the map is to continue meeting people "everywhere they are," whether online or offline, through "innovative and thoughtful activations." So they "designed the custom 'Build Back Better with Biden' Fortnite map to do just that — engaging players in a substantive, approachable, and fun way to reach and mobilize voters."

Reaching out to younger voting groups through video games is becoming quite the strategy for democrats. This new Fortnite map follows the Biden team's last gaming marketing campaign, in which they provided signs for players' Animal Crossing: New Horizons islands. Rep. Alexandria Ocasio-Cortez also nearly broke Twitch a couple weeks ago when she played Among Us for some 430,000 viewers.

But do these outreach efforts really inspire new voters? It's still too early to tell, but it likely depends on the ways in which politicians use the platforms.

First of all, it makes sense to hit up Fortnite for marketing. The game has become a platform for creativity beyond its battle royale premise, hosting digital concerts that have attracted up to 27.7 million viewers at a time. At least 62.7 percent of all Fortnite players are 18-24 years old with an additional 22.5 percent in the 25-34-year-old range. These age groups make up of some 37 percent of all eligible voters, but they're infamous for failing to show up at the polls.

Hence why the dems are trying to get their message out by going where the younger people go. It might've worked in New Horizons because the signs were quite cute and innocuous, and it might've worked with AOC's livestream because she's just really fun to watch and engage with, but this quiet Fortnite map kinda missed the mark.

It just seems so... lonely.

Jess Morrissette, a political science professor and video game enthusiast, explored the map in a lengthy Twitter thread. There's plenty of in-jokes (if they can be called that?) scattered around, poking at Biden's love for sunglasses and his tendency to say "malarkey," but the overall tone of the island appeared to be emptiness as the player explored the sights by themselves.

But it's not all solo sightseeing. There are also six side quests that center around the candidates' positions and favorite things.

The "Install 3 Scranton Towers" quest, for example, asks players to install new 5G towers to emphasize the candidates' position on broadband accessibility. "Restore the Aviator River" gets you to collect tin cans to clean up the waterway. "Visit Joe's Famous Ice Cream Shop" apparently exists as a reminder that Biden loves ice cream. And "Complete Kamala's Sneaker Run" sends players running around the whole city to find her shoes.

Reviewers have noted that matchmaking didn't seem to work from the map, leaving players alone to explore the island for about a solid hour.

Opinions on the campaign appear to be mixed. Mashable's deputy culture editor, Brian Koerber, called it "a win" that offered "a really great opportunity for parents to spend some time with their kids in the lead-up to the election, and for young players to learn about democracy while playing their favorite game."

Morrissette took on the opposite view, saying the game's "janky gameplay" made the whole piece feel out-of-touch and awkward. "It's also hard to imagine it will bring anyone to the polls who wasn't already planning to vote," the professor added.

Kotaku's Riley MacLeod expressed similar disappointment. "Hunting through a virtual town for Kamala Harris' sneakers taught me that Harris likes sneakers I guess, but I don't care about her footwear — I care far more about her stance on prisons and policing."

However, MacLeod conceded that, "If you're playing with your kids, it might be a good opportunity to teach them about the Democratic candidates and what they stand for."

It's not surprising to see political campaigns popping up in video games. Politicians have for decades reached out to actors and celebs for endorsements, and now they're also contacting social media influencers. From there, it's a natural progression to video games. Not every attempt to use games will escape any secondhand embarrassment, of course, but hopefully, these efforts will inspire some players to pause and take the time to think about voting.

More like this
There are QAnon NFTs now, because one grift deserves another
By AJ Dellinger
Biden's new office to fight for environmental justice already faces an uphill battle
By AJ Dellinger
How the shock and confusion of 9/11 enabled our modern conspiracy era
By AJ Dellinger
Stay up to date