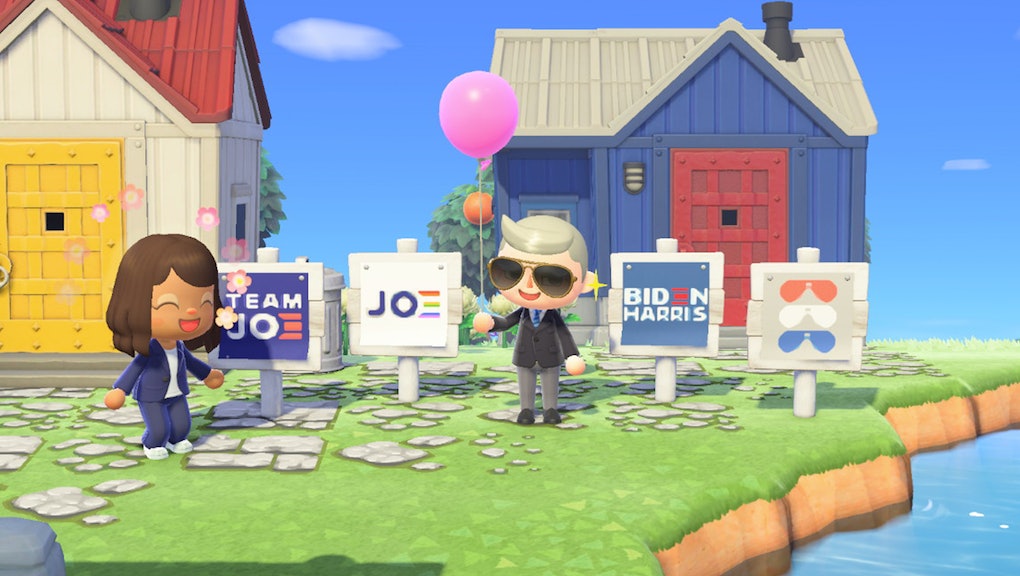 Nintendo really knocked it out of the park with Animal Crossing: New Horizons. It's proved to be the perfect game to sink into while folks were (still) stuck at home in quasi-quarantine. The game still enjoys a steady stream of popularity, thanks to its seasonal updates, as players returned to engage with events and redecorate their islands. Recently, brands have taken advantage of this unique platform to engage with their audience — and the Biden-Harris campaign is the latest to tap into this resource.

Today, The Verge reported that the Biden-Harris campaign has released four QR codes for Animal Crossing players to use as yard signs that display their support for the Democratic candidates. They include a dark blue Biden-Harris sign; a rainbow-colored, "Joe" pride sign; a dark blue "Team Joe" sign; and sign with a column of Biden's favorite aviator sunglasses in red, white, and blue.

New Horizons is no stranger to politicians using the game as a way to reach out to younger voters. Congresswoman Alexandria Ocasio-Cortez started her own island and used it to visit her Twitter followers in May. It seemed to be a pretty good experience for her and her supporters, so it's not a bad idea for the Biden-Harris campaign to do something similar.

"Animal Crossing is a dynamic, diverse, and powerful platform that brings communities together from across the world," Christian Tom, director of digital partnerships for the Biden campaign, told The Verge. "It is an exciting new opportunity for our campaign to engage and connect Biden-Harris supporters as they build and decorate their islands."

Engaging with younger supporters is particularly important for the Biden-Harris campaign. Biden has struggled to inspire young voters, though Harris' nomination has helped a bit, and their campaign has made a point to target advertisements with other young audiences, such viewers of this year's MTV Video Music Awards.

"As we enter the final campaign stretch towards November, [Animal Crossing] is one way we are finding new creative and innovative ways to meet voters where they are and bring our supporters together," Tom continued.

"This is just the start of how we plan to engage players ahead of November as we're already looking forward to rolling out more digital swag, voter education tools, and organizing efforts on Animal Crossing and other platforms."

In addition to political campaigns, other brands have been creatively mining New Horizons as a new way to digitally reach out to audiences. This is especially important for companies that relied on in-person events to keep their brands fresh.

In June, KFC Philippines created a fast food island and invited visitors to run around with Colonel Sanders, stare at all the fried chicken decor, and chill at a sit-in area.

Beginning in July, the Monterey Bay Aquarium began creating episodes with guest researchers who arrived to give real life facts about the game's featured wildlife, fossils, and museum pieces.

And in May, the NFL's Detroit Lions used a New Horizons video to announce their 2020 schedule in a clever, pun-filled, visually delightful way.

Maybe custom Biden-Harris clothing patterns or an aviator sunglasses giveaway? A Q&A done through the medium of Animal Crossing player avatars? The possibilities are just as endless as the game.

More like this
Bernie Sanders simply does not care about your archaic Senate rules
By AJ Dellinger
Amid daily reports of catastrophe, Americans are finally starting to realize climate change is bad
By AJ Dellinger
QAnon queen Marjorie Taylor Greene got suspended from Twitter for spreading coronavirus misinformation
By AJ Dellinger
Stay up to date