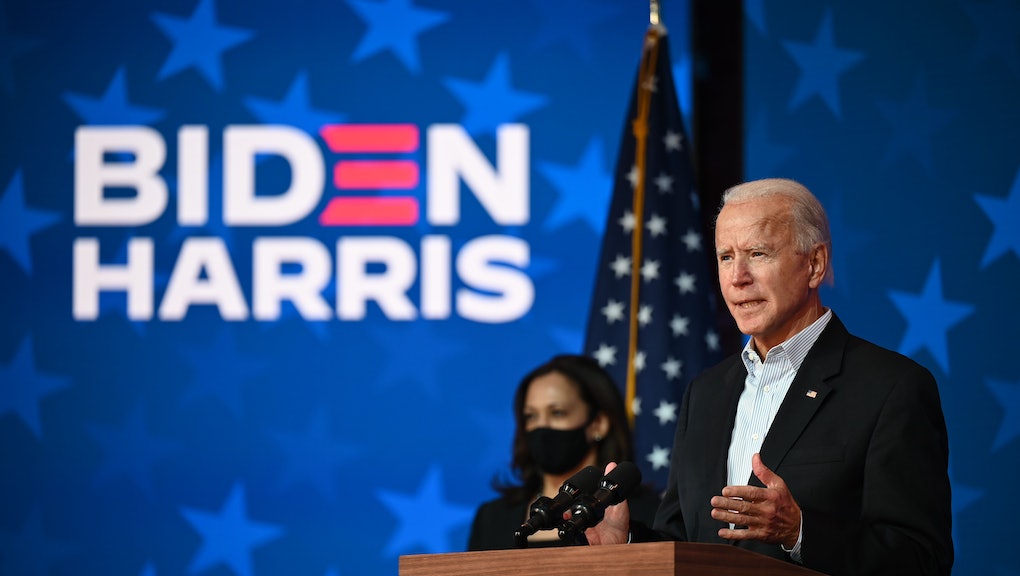 Biden and Trump are handling this election uncertainty decidedly differently

A measured, understated Joe Biden made a brief on-camera appearance Thursday afternoon, urging calm while projecting confidence that he and running mate Sen. Kamala Harris would emerge victorious in the 2020 presidential race — despite President Trump and his allies' repeated attempts to throw the entire process into chaos.

"Democracy is sometimes messy," Biden offered in what is perhaps the most understated assessment of the electoral hurricane sweeping contested battleground states like Pennsylvania and Nevada. "Sometimes it requires a little patience."

Contrasting Biden's steady remarks, the president's allies continued their increasingly frantic efforts to paint what appears more and more to be an impending electoral loss as a conspiracy, a crime, a betrayal, or perhaps a sort of permutation of all three.

Biden's speech, no matter how low-key it may have been (particularly in contrast to the past four years of presidential addresses), did not dwell solely on the election itself, either. Biden began his remarks with comments on the two major crises facing the United States today: the coronavirus pandemic, and the ongoing economic fallout thereof — a clear attempt to reframe himself as not simply a candidate, but the presumptive president-elect. Biden received a briefing on the pandemic earlier Thursday afternoon.

The actual president, meanwhile, has not made any public appearances since his bizarre 2:30 a.m. ET speech on election night, during which he preemptively and falsely declared victory, reportedly against the express wishes of his advisers. And while the president has called to "STOP THE COUNT" of outstanding votes, Biden made a point to express his faith in the electoral process itself — and what it represents beyond simply this election.

"In America the vote is sacred," Biden explained. "It’s how people of this nation express their will."

To that end, he did not keep his speech in the realm of lofty abstraction. In a nod to the slow, but steady count of votes in states like Pennsylvania, Nevada, and Georgia — only some of which he'd need to win to take the presidency, unlike Trump who essentially needs to run the table — Biden radiated confidence, explaining he has "no doubt" he and Harris will be the winners of this race.

While Biden's speech may have been slow — or even quaint — given the hyperbolic exaggerations of the current administration, it was a subtle reminder that leadership is not a question of who can simply bellow the loudest, but of who can actually lead.