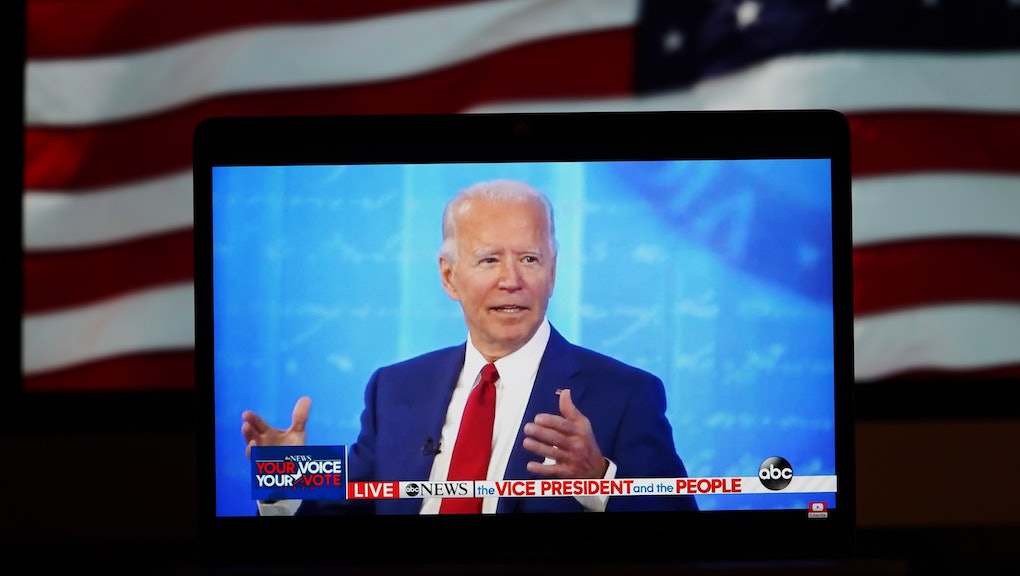 Look, I've resigned myself to the fact that if he wins the presidential election next month, Joe Biden's theoretical administration will be one of deeply uninspiring conservatism in the truest sense of the word — a White House dedicated to norm-respecting and bipartisan platitudes meant to reassure an addled public that things can and will simply go back to how they were, and that Donald Trump was an aberration, rather than the culmination of the Republican enterprise of the past 70 years.

Suffice it to say, if Biden becomes the next president, I'm not getting my hopes up. Still, even measured against those low expectations, I have to admit I was still surprised at just how profoundly committed to doing nothing Biden seems to be when it comes to the hard-right takeover of the judicial branch.

The issue of court-packing — and in particular whether a theoretical President Biden would pursue it — has been top of mind in recent weeks since the death of Justice Ruth Bader Ginsburg. Trump and Vice President Mike Pence have made it a core part of their messaging that Biden and his running mate Kamala Harris would "pack the court" if elected. While popular on the left, the strategy isn't widely embraced across the political spectrum, and Biden and Harris both have generally dodged giving a straight answer on the topic.

"If elected, what I will do is I'll put together a national commission of — bipartisan commission of scholars, constitutional scholars, Democrats, Republicans, liberal, conservative," Biden told CBS News's Norah O'Donnell in a just released clip from his upcoming 60 Minutes interview, scheduled to air Sunday. "I will ask them to over 180 days come back to me with recommendations as to how to reform the court system because it's getting out of whack," he continued.

This is, of course, Biden in a nutshell. To him, there's no problem that can't be solved by simply getting people who disagree in a room together so they can, uh, agree I guess? Never mind that the conservative takeover of the judiciary — from the Supreme Court on down — is part of a longstanding realization by Republicans that it doesn't matter how you play the game, so long as you've already bought off the refs.

Biden's unflappable faith in the norms, which over the past four years have been exposed as a nothing more than a comforting fiction, somehow leads him to believe that the malicious weaponization of the judicial branch is simply a question of the system being "out of whack." He even wants some of the very people doing that weaponization to be a part of his brain trust of super-suggesters. After all, if norms are to be upheld, as they must be in a Biden administration, then surely the very party that's dismantled and rebuild the court system in their image should also play a role in repairing the damage they themselves have caused.

And that's the charitable explanation for Biden's proposal. Because, by proposing a commission to give him suggestions, rather than have a plan for the courts in the first place, it's entirely possible that Biden doesn't actually see the out-of-whackness of the judiciary as a serious problem. If he did, surely he'd have more of a plan than just "gonna get some folks in a room a few months from now to tell me what they think." Instead, he's doing the sort of thing a parent does when their child keeps bugging them about something the adult clearly feels isn't worth their time: "Oh, you want a new toy? You want s'mores for dinner? You think your bedtime should be 11 p.m.? Okay. Sure. Whatever. I'll think about it. Now leave me alone."

Put another way: This is what you do when you don't actually want to do something, but you'd like to make people think you're doing something.

As it stands now, the Republican takeover of the court system is poised to reshape the way this country operates for generations to come. If the best the standard-bearer for the Democratic Party can come up with is to kick the can down the road in the hopes of resetting the "out of whack"-ness of it all, then it seems safe to assume the Republicans will simply plan to continue their grand experiment of creating a permanently conservative judiciary, unabated.

More like this
Biden's $1.8 trillion "American Families Plan" is a massive down payment on the future
By Rafi Schwartz
Biden's pledges aren't enough to avoid the worst effects of climate change, new study says
By AJ Dellinger
Title IX will once again protect against gender identity discrimination
By Rafi Schwartz
Stay up to date