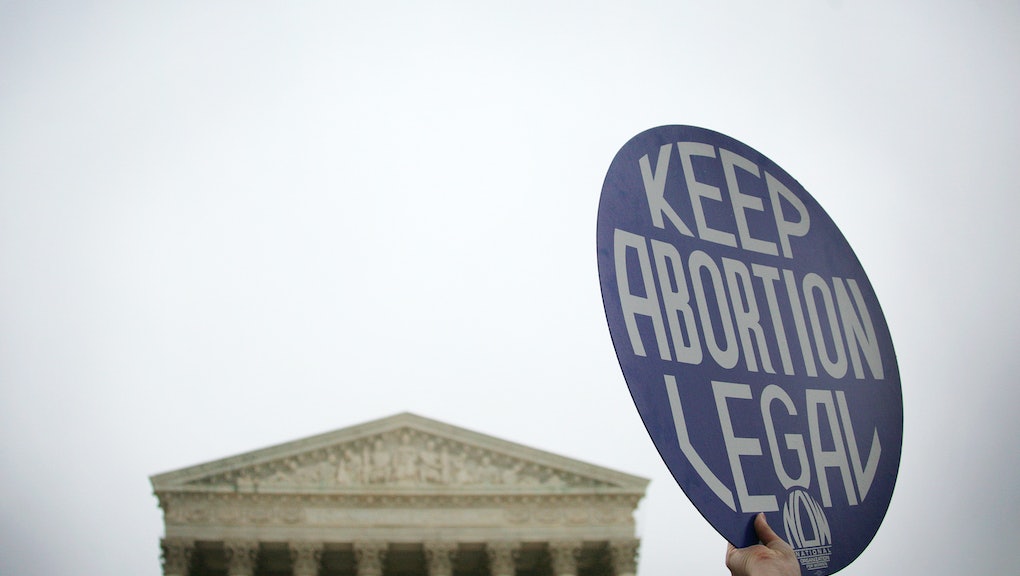 Who is Amy Coney Barrett? A guide to Trump's likely Supreme Court pick

With President Trump set to announce his nominee to replace the late Justice Ruth Bader Ginsburg on the Supreme Court, sources close to the White House reportedly say the likely nominee is Amy Coney Barrett. Trump has indeed pledged to choose a woman to replace Ginsburg — and with Republicans lining up to support a speedy confirmation process, Barrett could very well be the next justice of the high court.

Trump will make the announcement Saturday at the White House. His previous nominations to the Supreme Court, Brett Kavanaugh in 2018 and Neil Gorsuch in 2017, were each aligned with his brand of conservatism, and Barrett figures to be no different.

You might have heard Barrett's name in 2017, when she was nominated for a position as an appellate judge. At 48 years old, she would be the youngest person ever nominated to serve on the highest court (Gorsuch was 49 at the time of his nomination). Given that justices serve lifetime appointments without term limits, if Barrett is nominated and confirmed, her judicial opinions will reverberate throughout the country for the next few generations. So, here's what you should know about Trump's likely pick:

1. She clerked for late Justice Antonin Scalia and shares his approach to interpreting the Constitution

Barrett clerked for Justice Antonin Scalia, whose death in February 2016 set off the battle between then-President Barack Obama and Senate Majority Leader Mitch McConnell, who refused to consider Obama's nominee to replace Scalia on the bench. (Scalia's seat was eventually taken by Gorsuch.) Scalia was known for his ultra-strict interpretation of the Constitution; he approached the founding document not as a living text, but one that should be interpreted by deducing its meaning at the time of its writing in the late 18th century.

Barrett approaches the law similarly, through the lens of her Catholicism and with a strict interpretation of the Constitution. So-called "strict constructionists" decide rulings based on just the text of the Bill of Rights, the Constitution, and its amendments. They allow for no reading between the lines or evaluating the founding documents in a modern context.

2. Her faith may influence her rulings

Barrett has explicitly stated that her faith influences how she thinks about policy issues, such as abortion and the death penalty. William Brennan, a former Supreme Court justice and fellow Catholic, was similarly open about his religious upbringing and devoutness in his adult life. But he was also adamant that as a justice, his oath to the Constitution took priority over his religious piety.

However, Barrett has claimed that as a member of the court, there is no separation of religious values and judicial rulings for her. Critical of Brennan's perspective on balancing faith with his constitutional duties, Barrett wrote that she could not "defend this position as the proper response for a Catholic judge to take with respect to abortion or the death penalty."

But later, during her own appellate court appointment confirmation hearings in 2017, Barrett seemingly contradicted herself. She told lawmakers that judges should not allow personal opinion to dictate their rulings, because it would be unlawful "for a judge to impose personal opinions, from whatever source they derive, upon the law."

Given the slough of abortion bans introduced at the state level in the past decade, it's likely that we'll continue to see challenges to local laws that make their way to the Supreme Court. If Barrett is seated, abortion access could become even more tenuous than it already is.

First off, Barrett has openly stated that she's unsure if prior judicial rulings should inform a judge's interpretation of a case, a concept known as "stare decisis." This perspective conflicts with the popular understanding among those in the judicial branch that court rulings, especially those from the top court, are rarely overturned or challenged by a later case, and that judicial precedent should be respected.

By critiquing stare decisis, Barrett is implying that to her, settled case law such — like, say, the ruling in Roe v. Wade that grants the constitutional right to an abortion — is not actually settled. In addition to referring to Roe as an "erroneous decision," per the Los Angeles Times, Barrett analyzed the impact of the ruling to a Notre Dame student-run paper, saying, "The framework of Roe [v. Wade] essentially permitted abortion on demand, and Roe [v. Wade] recognizes no state interest in the life of a fetus."

Even if Barrett is correct in that the case's framework permitted legal abortions, the actual impact of the ruling is far cry from "on demand" abortions (especially since 26 states mandate abortion waiting periods). Additionally, with her mention of "state interest," Barrett implied that states should have a say in deciding who is allowed to terminate a pregnancy — an issue central to many of the cases working their way toward the Supreme Court right now.

In that same interview, she noted correctly that many of the individuals who terminate pregnancies are poor and single. However, she didn't say if she believes individuals should receive medical care no matter their income, a perspective that would impact laws like the Hyde Amendment, which bars federal funds from going toward abortions.

4. She thinks the Supreme Court overstepped on Obamacare

Trump and the GOP have spent countless hours attempting to dismantle the Affordable Care Act (ACA), a.k.a. Obamacare, and they're not done. In fact, the Supreme Court is set to hear a case on the health care legislation just one week after November election.

If the president is looking for a justice who can legislate on this topic from the bench, it seems Barrett would likely oblige. She has already made public statements about the ACA, writing for the Notre Dame Law Review in 2017 that "[Chief Justice John] Roberts pushed the Affordable Care Act beyond its plausible meaning to save the statute." In 2012, Roberts sided with the court's liberals in ruling that the individual mandate portion of the ACA — which anchors the entire program by levying a tax penalty on anyone who forgoes health care coverage — was constitutionally sound, because Congress has the power to tax and Congress passed the law.

5. She questions whether the Supreme Court should have ruled on marriage equality and has a history of transphobic statements

Barrett has a history of speaking out against the rights and humanity of LGBTQ+ people. At a Jacksonville University Public Policy Institute talk in 2016, Barrett questioned the court's landmark 2015 marriage equality ruling, wondering whether the case, Obergefell v. Hodges, should have even come before the justices in the first place. The Supreme Court's ruling granted same-sex couples the right to marry nationwide after a series of state-level conflicts over the matter.

Barrett said at the talk that "those who want same-sex marriage, you have every right to lobby in state legislatures to make that happen, but the dissent’s view was that it wasn’t for the court to decide. ... So I think Obergefell, and what we’re talking about for the future of the court, it’s really a 'who decides' question." The implication is that Barrett believes states should have been permitted to continue making their own decisions on the legality of same-sex marriage, which of course would have permitted continued discrimination against queer couples.

At that same talk in 2016, Barrett also claimed that the landmark equity-in-education statute known as Title IX doesn't apply to transgender people. She said, "Maybe things have changed so that we should change Title IX, maybe those arguing in favor of this kind of transgender bathroom access are right. That’s a public policy debate to have. But it does seem to strain the text of the statute to say that Title IX demands it." In June, the court ruled on a different federal provision, Title VII of the Civil Rights Act, declaring that its anti-discrimination principles do apply to gay and transgender people.

Barrett has used transphobic language, per the Human Rights Campaign, to "cast doubt on transgender rights." According to The New York Times, she has also spoken at religious legal organizations that represented homophobic clients.

6. She's got some notable affiliations outside the courtroom

It's not only Barrett's constitutional interpretations and previous rulings that have liberals worried. Her reputation outside of the courtroom is also raising plenty of red flags. Barrett is a member of the conservative Federalist Society, which, as Politico reported, is one of the "most influential legal organizations in American history, with intellectual reach and political clout that no other legal group can match." In fact, it's common knowledge that Trump "outsourced" the job of choosing SCOTUS nominees to Federalist Society Vice President Leonard Leo.

Then there's her affiliation with the religious organization People of Praise, which reportedly served (at least in part) as inspiration for the dystopian novel and TV show, The Handmaid's Tale. According to The New York Times, the group maintains a strict code of conduct for its members: "Members of the group swear a lifelong oath of loyalty, called a covenant, to one another, and are assigned and are accountable to a personal adviser, called a 'head' for men and a 'handmaid' for women," the Times reported. People of Praise also believes that husbands should serve as the authority figures of their families, and that husbands are the "heads of their wives."

As the country slides past the news of 200,000 people killed by the coronavirus pandemic and the Trump administration's catastrophic response, the president himself has once again been granted the power to chart the course of the country for decades to come. A conservative judge with a penchant for prioritizing her faith would surely shake up the court — especially given that even with its 5-4 conservative lean earlier this year, it delivered some surprising wins for liberals. Whether that delicate balance turns into a decisive 6-3 split favoring conservatives will be decided in a vicious fight in the weeks to come.

More like this
Why grand jury proceedings are so secretive
By Vanessa Taylor
Is it time for America to have a legit third party?
By Rafi Schwartz
How the treasury secretary keeps America's economy afloat
By Vanessa Taylor
Stay up to date