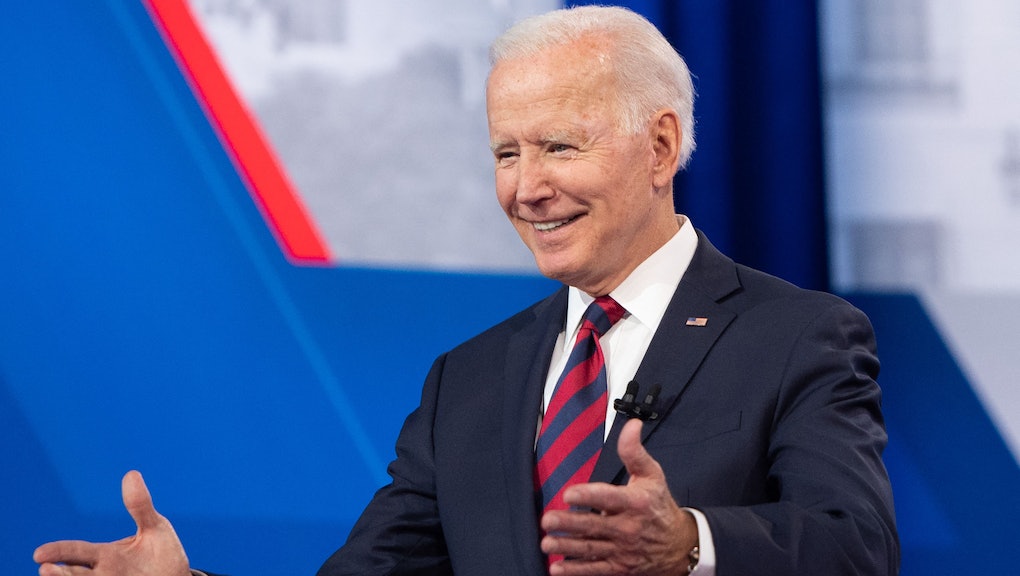 There are plenty of things in American politics that deserve to be hated on. I mean, the electoral college? A two-party system? The vast majority of our politicians? The list goes on and on. One thing that doesn't get dunked on enough for my liking, however, is the filibuster. Although some Democrats have been pushing to remove the procedural tool, President Biden recently backed the filibuster, claiming that its elimination would "throw the entire Congress into chaos."

During a town hall in Cincinnati on Wednesday night, CNN host Don Lemon asked Biden about the filibuster's role in stalling civil rights legislation, particularly efforts to protect voting rights. The question is of extreme relevance given that Republicans have continued to attack voting rights, particularly within communities of color. Montana has become ground zero for Native Americans as they fight against Republican-led voter suppression, while across the South, states have passed unnecessary laws making it harder to vote.

But in response, Biden made it clear that he doesn't support efforts to do away with the filibuster entirely. Although Biden noted that he's been "saying for a long, long time, the abuse of the filibuster is pretty overwhelming," he also stated, "There's no reason to protect it other than you're going to throw the entire Congress into chaos and nothing will get done."

Rather than eliminate the filibuster entirely — which would in effect let most bills pass with a simple majority, rather than 60 votes — Biden said he supports bringing back the "talking filibuster." He said, "I would go back to that, where you have to maintain the floor. You have to stand there and talk and hold the floor."

With Democrats now holding the Senate majority, there's been an increased push from the party to do away with the filibuster due to concerns that Republicans will use it to prevent them from doing anything at all. In the United States, filibusters are basically loopholes that allow politicians to block votes from taking place. Both the House and the Senate used to have filibusters but, in 1842, the lower chamber adopted a rule that let a simple majority limit the time for debate. This new rule effectively abolished filibusters in the House.

The Senate, however, has held onto the filibuster, which it sees as part of its "tradition of unlimited debate." As The Washington Post reported, a senator can filibuster by refusing to yield the floor to block a bill, unless at least 60 colleagues vote to end the debate and carry on to vote. In the past, the senator who wanted to filibuster had to literally hold the floor by talking, but now, all someone really needs to do is announce their intent to filibuster.

You can see, then, how easy that system would be to abuse. As noted by Indivisible, a progressive organization, while both Democrats and Republicans have used filibusters, "it has been weaponized by a greater extent than ever before by Republicans in order to kill landmark pieces of legislation, from civil rights to gun violence prevention and beyond."

In most cases where politicians want to hold onto "tradition," they tend to invoke the Constitution. However, the filibuster isn't required by the Constitution at all. In fact, people were historically wary of filibusters. In 2011, Rob Goodman and Jimmy Soni wrote in The Atlantic, "Our founders were deeply read in classical history, and they had good reason to fear the consequences of a legislature addicted to minority rule. As Alexander Hamilton wrote in The Federalist No. 22, 'If a pertinacious minority can control the opinion of a majority ... [the government's] situation must always savor of weakness, sometimes border upon anarchy.'"