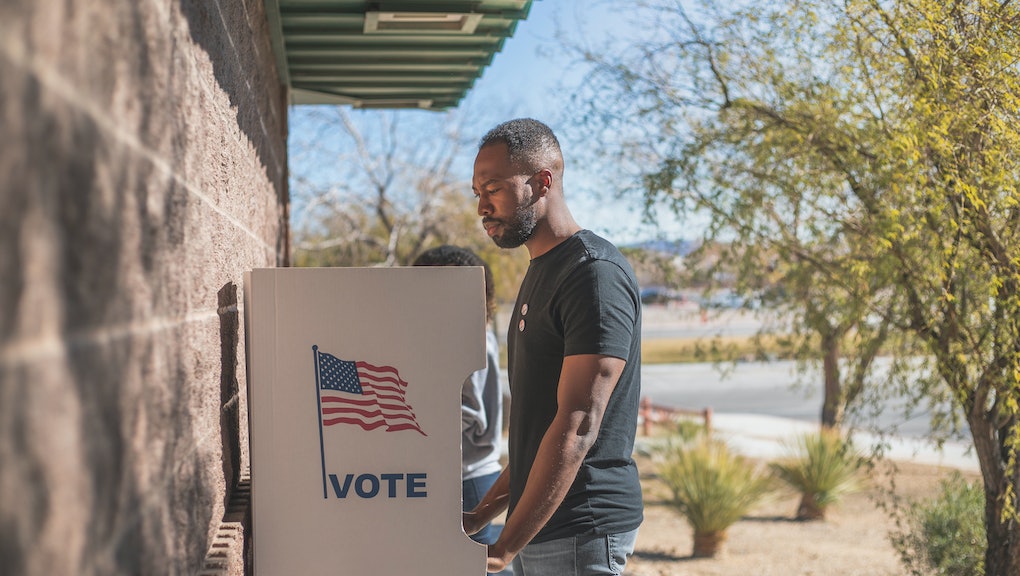 Black men in America will not be sidelined on Election Day

Ever since the 15th amendment was ratified in 1870, Black (male) voters have had the power to swing elections. In fact, the very first presidential election after Black Americans gained the right to vote went to Ulysses S. Grant, an ally and polar opposite of incumbent Andrew Johnson, who, for many reasons, was terrible for racial equality. Black voters helped usher out unjust leadership in the past, and it’s our time once again.

Now of course, the Black vote has been subdued in the past — voter suppression has gone hand-in-hand with American democracy since its inception. In the late 1800s, the KKK and other white supremacists fought against our voice with violence and intimidation, voter identification laws and tests, and too many other things to list. They all might sound familiar to 2020 ears, though. These forms of suppression are still used on us; take this weekend in Austin, Texas, where Trump supporters allegedly tried to run a Biden Harris campaign bus off a highway. So the struggle is very much our current reality.

It’s important to note that I’m focusing on the Black male vote here for a few reasons — one of them being that I can only speak from my experience. Also, regardless of the fact that Black women could not vote for years after Black men were allowed to, they’re still more engaged in our voting process, according to findings. As unfair as it is to put yet another onus on Black women, they are saviors in many ways. So I want to talk about Black men leveling up in this arena.

In the 2016 election, suppression and other factors led to the Black voter turnout rate declining for the first time in decades. But this year, the Black male vote may be on the upswing again. One reason why might be Trump’s mishandling of the pandemic, which hurt our communities disproportionately. Groups all over the country are mobilizing right now, including The Collective PAC, a political action committee deeply invested in the Black male vote.

The organization was started by voting rights advocate Quentin James, in 2016; for him and his cohorts, that election was also crucial to drumming up engagement. "We tried to channel Black frustration — but also, our interest — in political office,” says James. This cycle, the PAC aims again, to involve Black men in important conversations about leadership and policy. James tells Mic that this demographic represents a voting block that historically has boosted candidates into office. Their role is crucial this year, and both parties know it.

Trump’s nausea-inducing wooing of rappers and other Black influencers, in particular, is telling; he probably feels these endorsements will draw us in. But there’s a respectful way to engage the community — one that addresses pressing issues that we face on a daily basis. James has focused his mobilizing efforts on building the political power of the Black community by electing Black candidates from the local level upward, which is crucial in this election.

“We know that 90% of political officials in this country are white, so we want to figure out a way to to encourage Black people to not only support those candidates with their votes, but with their dollars,” he says. Ensuring representation is good for everyone and James is helping spread the word on how to create more balance when it comes to leadership.

Systems of racial oppression — the same ones to enable cops to shoot Black Americans for no good reason and get away with it — make it evident that our communities and lives are not prioritized. And that can make voting significantly less appealing for Black Americans.

James recognizes that this created a need for a different type of outreach. It involves real conversations, as well as a focus on Black voters who did not vote in 2016 or 2018, even though they were registered. Reaching out to voters who have been disenfranchised or feel like no one has their best interest in mind is key. Because he and his cohort actually do know what matters in their communities.

Black voters did indeed turn out this season, with early voting figures shattering records. By October 31, turnout numbers reached 65.5% of 2016’s total voter turnout (for that entire election.) Black Americans make up the biggest block of self-reported early voters, according to a poll by FiveThirtyEight.

James is realistic about the extent that non-Black allies and advocates can shift the needle. “We can’t depend on white voters to show up on our behalf. They have never done that before in this country and we shouldn’t expect that to happen now,” James adds.

He couldn’t be more right about that — just take a look at the 2016 election. “Voting won’t solve every one of our problems, it’s not a silver bullet. But, it’s one of the tools we shouldn’t leave at home,” he says. And just like our bodies, our voice, and our ballot, we’re getting involved. So, when this Election is through — whatever the outcome — you’ll have heard us.