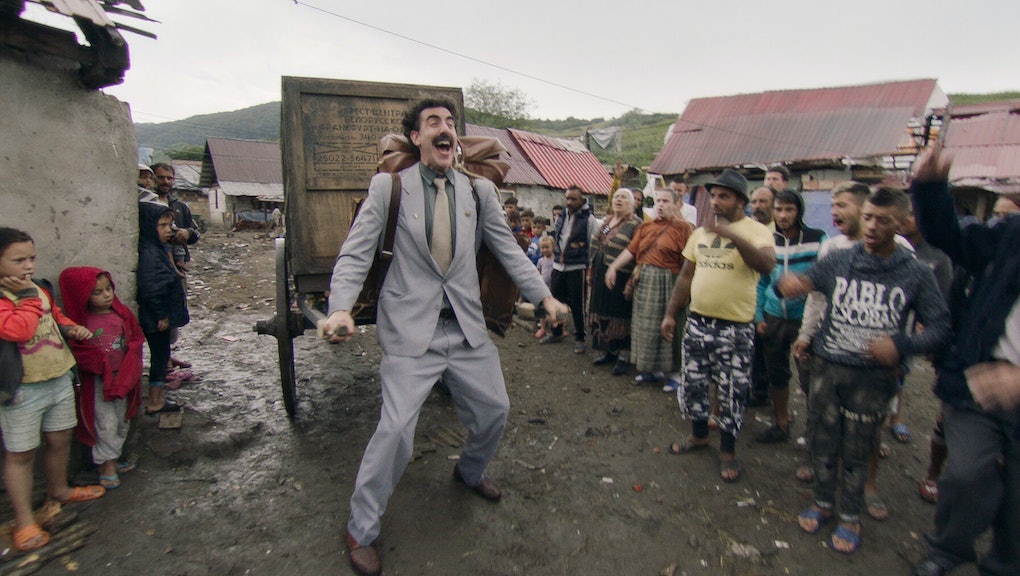 There’s a decent chance you’ve already heard about the climax of Borat Subsequent Moviefilm — and the potentially averted climax of former Mayor Rudy Giuliani. While the national news and ingenious marketing disguised as a spoiler is the kind of scene that crowds out everything in its orbit, the moments before it are a little bit more indicative of what the sequel has to offer. Borat’s daughter in the film, played by Maria Bakalova, has posed as the sort of anonymous news anchor that tends to get unprecedented access to figures in the Trump administration. She’s interviewing Giuliani about President Trump’s COVID-19 response. In a fairly innocuous exchange, they banter about eating bats, with Giuliani jokingly agreeing to join her in doing so.

It makes for great comedy, but you can feel the long-awaited Borat sequel straining for its gotchas, higher-profile targets, and a tidy sentimental narrative in ways that its predecessor didn’t attempt. Sacha Baron Cohen’s first big-screen outing in the role was a transcendent work of comedy, one of the highest joke-per-minute ratios of any film this century. Cohen’s grasp of the Borat earworm remains largely intact — he offers his anus (a-noose) to Giuliani — even if there aren’t enough new syntactical innovations that hit like Pam-ella in the first film. Although he leans on many of the same devices — guerrilla acts to catch depravity from real people on camera, interviews in character with right-wing ghouls, and interstitial advice from experts as he badly defies it in another scene — you can feel it wobble.

When the moviefilm opens, Borat is serving out his sentence at the gulag for bringing great embarrassment to Kazakhstan upon the first movie’s release in 2006. To repent for his notoriety, the government commissions him for one last job: delivering one of the country’s most renowned television stars, Jonny the Monkey, as a gift to Vice President Mike Pence. It’d be an actual spoiler to reveal what happens to Jonny, but to say the least...he does not end up making the trip to America. Instead, Borat’s saddled with his 15-year-old daughter Tutar.

The pair have genuinely sweet chemistry and work through some amazing bits together, if their relationship and its arc assume a more central role than Borat’s with sidekick Azamat in the first outing. It’s natural that plotting would have to take center stage, and in a more belabored way — eight credited screenwriters had to work around the challenge of Borat being a household name in America. They ably outfit him in hilarious disguises to get close to his subjects — my personal favorites, Prof. Phillip Drummond III and Tutar as Sarah Jessica Parker Drummond, leave an indelible mark at the high society moon blood dance.

Although there are a few genuinely inspired gut-busters, like a return to Borat’s fish-out-of-water brilliance while learning FaceTime or the reveal of Azamat’s fate, the elephant in the room of Subsequent Moviefilm is a little too overbearing. Much ink has been spilled about the challenge of political comedy under Trump, how his showtime presence tends to supersede almost every attempt at satire. If there was any comic I’d trust to overcome this, it’s Cohen, but even he can’t help but remain monomaniacally focused on the president through Drumpf-adjacent cracks. This is a starker contrast to George W. Bush’s more ambient presence in the first film, which was content to let its regular people be the primary villains.

There are some genuinely terrifying moments in tow, with naked antisemitism on display from a baker who willingly writes “Jews will not replace us” on a cake, a plastic surgeon who laughs right along with Borat’s remarks about surgery on Jewish noses, and extremist rally goers Borat encounters, but you sense a more guarded populace this time. It’s a bit surprising, given the confidence with which the far-right has mobilized in the last four years, that he wasn’t able to get even more, beyond leading a racist singalong at the March for Our Rights event. These incidents are spread enough apart, and frankly not always alarming enough to stand out from what you can encounter with a few clicks on Twitter.

You sense that both Borat the character — and Cohen himself — come to the table with a heavier conscience than last time. (It isn’t a spoiler to reveal that the film quite literally ends with a plea to vote.) This ultimately translates to a redemptive arc of sorts for Borat, who has no choice but to become a better father. Perhaps it’s satisfying in some small way, but evades the more thrilling moral complications of Borat being equally as compromised as his subjects in the first film. I don’t know anyone who turns to Borat for scruples over scrotum.