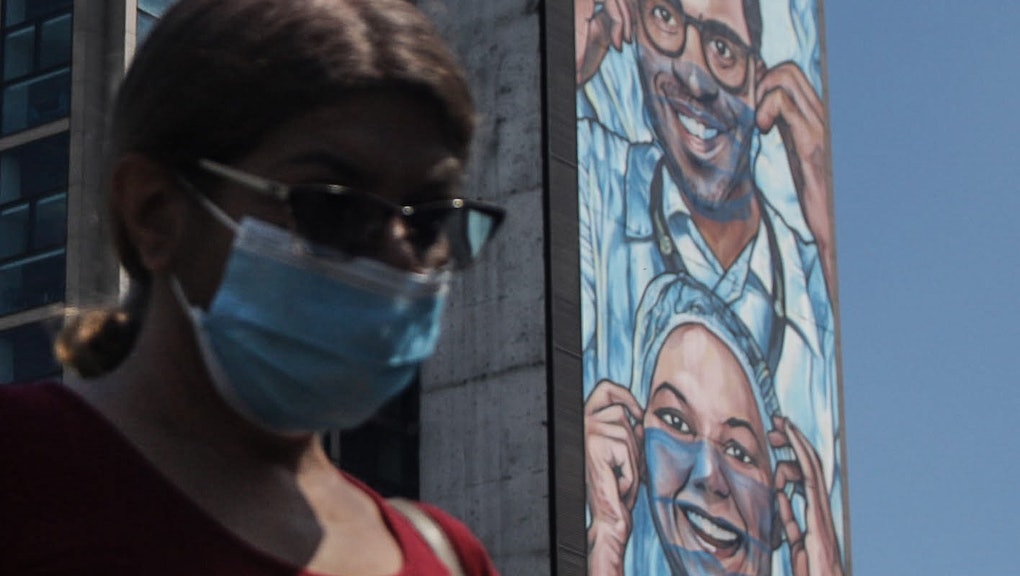 We are all ready to get off this coronacoaster, I know. Unfortunately, the virus’s mutations are making it harder and harder for us to take off our safety belts (er, masks). It turns out that a newish variant — called the P1 — is likely more transmissible and new data suggests that this this variant from Brazil could also reinfect people who’ve already had COVID-19.

The research, which was conducted in Brazil and the U.K., looked at coronavirus cases in the city of Manaus, Brazil, where the P1 variant became dominant, the New York Times reported. What scientists found is that the P1 variant seems to be more transmissible — meaning it spreads more easily that some other variants — and, unfortunately, it also seems to be able to reinfect people who have already recovered from COVID-19.

How common it is for the P1 variant to reinfect those who have already survived infection is a little hazy. But the data suggests that people who have recovered from COVID-19 have a 25% to 60% chance of reinfection. Sadly, the P1 variant is currently spreading in Brazil and 24 other countries, and it has been found in five U.S. states: Alaska, Florida, Maryland, Minnesota and Oklahoma, according to the Times.

Look, this is not great news, but try not to panic. The P1 variant is so new — it was found in December — that the data scientists are looking at is preliminary, which means that it hasn’t been officially published or peer reviewed. These studies also specifically look at coronavirus cases in the city of Manaus, and we can’t assume that their findings necessarily apply to the rest of the world.

“It’s right to be worried about P.1, and this data gives us the reason why,” William Hanage, an epidemiologist at the Harvard T.H. Chan School of Public Health, told the Times. But the researchers who worked on the study encouraged us to keep the data in perspective. “The findings apply to Manaus, but I don’t know if they apply to other places,” said Nuno Faria, a virologist at Imperial College London who led some of the research, to the Times.

It’s not clear how effective each of the currently available vaccines may be against this particular variant, but getting vaccinated is still crucial to ending this pandemic. “The ultimate message is that you need to step up all the vaccination efforts as soon as possible,” Faria told the Times. While it’s true that none of the vaccines is perfectly effective against any variant, all of them put us one step ahead of the virus by reducing both severity and spread.

And, while it’s not exactly what any of us want to hear right now, the good news is that while all these new variants are scary, we don’t have to do things differently as a result. Faria told the Times that we just need to double down on every measure we have to slow the spread of the coronavirus — a.k.a. masks and social distancing. So just keep doing what you’re doing and get the vaxx.

More like this
How the Delta variant could mess with your summer travel
By Melissa Pandika
J&J vaccine may be less protective against the Delta variant, new research confirms
By Tracey Anne Duncan
Should vaccinated people wear masks indoors?
By Peter Chin-Hong
Stay up to date