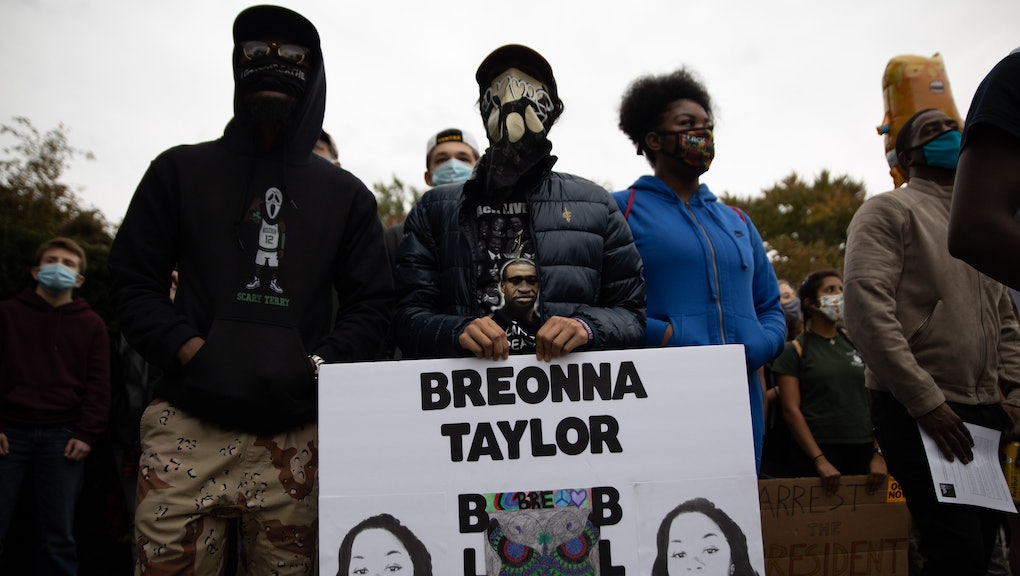 Police Sgt. Jonathan Mattingly, one of the Louisville Metropolitan Police Department officers involved in the March 13 shooting death of Breonna Taylor, an unarmed Black woman who was killed in her own home during a botched police raid, has filed a lawsuit against Kenneth Walker, Taylor's boyfriend. Mattingly alleges that Walker is responsible for "severe trauma, mental anguish, and emotional distress" after he was injured during the confrontation at Taylor's home.

Kent Wicker, an attorney representing Mattingly, said in a statement to the Louisville Courier Journal that "Sgt. Mattingly was shot and nearly killed by Kenneth Walker. He's entitled to, and should, use the legal process to seek a remedy for the injury that Walker has caused him."

Mattingly, who was not charged for his role in Taylor's death, was shot through the femoral artery during the raid on Taylor's home — an injury he claims he sustained when Walker, a licensed gun owner, opened fire at what he assumed was a home invasion. Walker has since alleged that the police are working to "silence me and cover up Breonna's murder," and his attorney has claimed that there is reasonable doubt that Walker was responsible for Mattingly's injury at all.

"The timeline and evidence at the scene is more indicative of [police] actually shooting Mattingly than it is Kenny Walker," attorney Steve Romines claimed in early September. Walker has since filed his own lawsuit alleging police misconduct and is seeking prosecutorial immunity under Kentucky's "Stand Your Ground" laws. He had initially been arrested and charged with attempted murder, but those charges were subsequently dropped.

Just weeks after Walker filed his lawsuit, Kentucky Attorney General Daniel Cameron announced charges against LMPD Detective Brett Hankison, for three counts of first-degree wanton endangerment, claiming Hankison recklessly fired his gun into a neighboring apartment during the raid on Taylor's home. To date, Hankison is the only officer charged in relation to Taylor's killing, and he was only charged for the firing the bullets that did not hit Taylor.

Mattingly's lawsuit, which describes Walker's actions on the night Taylor was killed as "outrageous, intolerable, and [offending] all accepted standards of decency and morality," was met with derision by Walker's attorney.

"One would think that breaking into the apartment, executing his girlfriend, and framing him for a crime in an effort to cover up her murder would be enough for them," Romines told CBS News. "Yet this baseless attempt to further victimize and harass Kenny indicates otherwise."