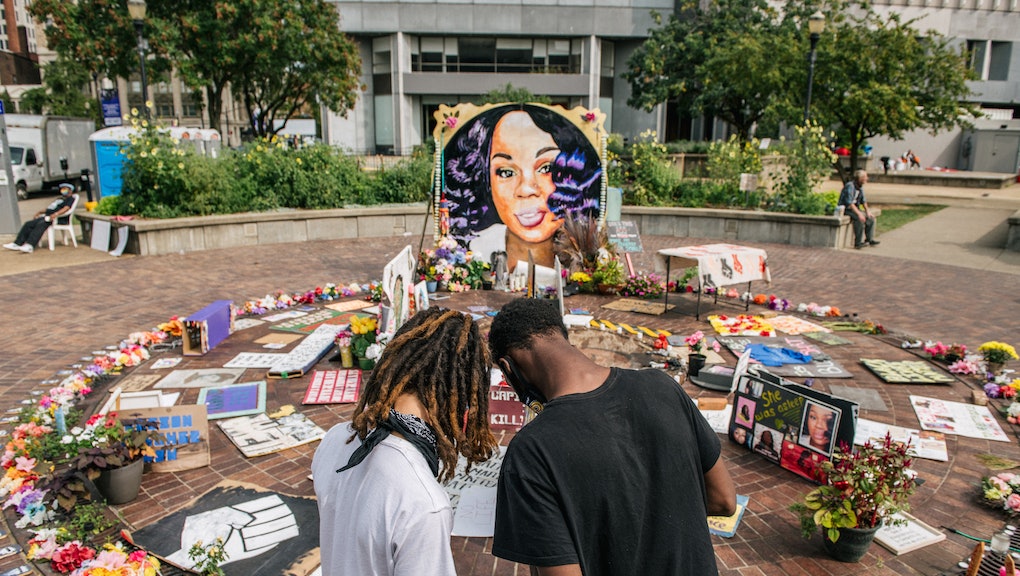 Brett Hankison, the former Louisville Metropolitan Police Detective involved in the March 13 shooting death of Breonna Taylor has been charged by a grand jury with three counts of first-degree wanton endangerment, Jefferson County Judge Annie O'Connell announced on Wednesday. The decision comes more than six months after Taylor, a 26-year-old EMT, was shot and killed in her home by officers executing a no-knock warrant intended for a different individual, in a different household. The other officers involved in her death, Sgt. Jonathan Mattingly and detective Myles Cosgrove, will not be charged. "My office is prepared to prove these charges at trial," Kentucky Attorney General Daniel Cameron said in a press conference following the announcement.

According to the Louisville Courier Journal, a wanton endangerment charge is a class D penalty. The charges reportedly could carry up to five years in prison, and stem not from Hankison’s shooting into Taylor’s apartment, but the fact that his bullets entered the homes of her neighbors instead.

"Every day this family wakes up to the realization that someone they loved is no longer with them," Cameron said. "There’s nothing I can offer today to take away the grief and heartache this family is experiencing. ... There is no doubt that this is a gut wrenching emotional case, and the pain that many people are feeling is understandable."

In recounting the series of events leading to Taylor's death, Cameron said, "in total, six bullets struck Miss Taylor. Medical evidence obtained by our team indicates that only one shot was fatal.” Cameron also said Mattingly and Cosgrove were justified in their use of force, according to Kentucky law.

Ju'Niyah Palmer, Taylor's sister, tweeted shortly after announcement, "they failed you, they failed me," adding, "Breonna i am so sorry...i don't know what to do."

Civil rights attorney Ben Crump, who represents Taylor's family, also tweeted his reaction, writing "This is outrageous and offensive!" In a second tweet, he added, "If Brett Hankison's behavior was wanton endangerment to people in neighboring apartments, then it should have been wanton endangerment in Breonna Taylor's apartment too. In fact, it should have been ruled wanton murder!"

"I know that not everyone will be satisfied with the charges," he said, before sending a message to protestors and those who disagree with the results of the investigation. "If we simply act on emotion or outrage, there is no justice. Mob justice is no justice. Justice sought by violence is not justice. It just becomes revenge. ... I urge those protesting on the streets to remember this: Peaceful protests are your right as an American citizen. Instigating violence is not."

Communities across Louisville had braced for Wednesday's grand jury decision earlier this week, after the city ordered a state of emergency "in anticipation" of the charging announcement. Businesses across the city have reportedly been boarded up, with a 25-block perimeter closed to traffic as of Tuesday. Mayor Greg Fischer announced a curfew for Wednesday evening ahead of expected protests and demonstrations. Kentucky Republican Gov. Andy Beshear also stated that he would be willing to deploy National Guard troops following the announcement, telling reporters during a Monday press conference that "if it is needed, we will authorize it."

Calls for charges against the officers involved in Taylor's death became a rallying cry in the months following the shooting, and included a coordinated social media campaign on what would have been her 27th birthday this past spring. Hankison had since been fired from the LMPD, while the others have been reassigned.

Last week, Taylor's family reached a reported $12 million settlement with the city, ending a wrongful death lawsuit filed the month after the March 13 shooting. Also last week, the Louisville Metropolitan Council overwhelmingly passed a "no confidence" vote against Mayor Greg Fischer, in part over his handling of Taylor's death and the city's subsequent inaction against the police department.

Conversely, Mattingly — one of the officers who helped conduct the no-knock raid on Taylor's home — issued a rambling, defiant missive to his colleagues early Tuesday morning, describing his conduct that evening as "legal, moral and ethical" while vilifying protestors and denigrating department higher-ups, as well as federal investigators.

In a statement to the Courier Journal, Taylor family attorney Sam Aguiar decried Mattingly's letter as "insulting to anyone with common decency."

"His characterization of protesters as 'thugs' is reprehensible," Aguiar continued. "This department has instilled a culture which needs to be changed."

In response to Wednesday's announcement, the American Civil Liberties Union (ACLU) tweeted, "Today's verdict is not accountability and not close to justice. This is the manifestation of what the millions of people who have taken to the streets to protest police violence already know: Modern policing and our criminal legal system are rotten to the core."