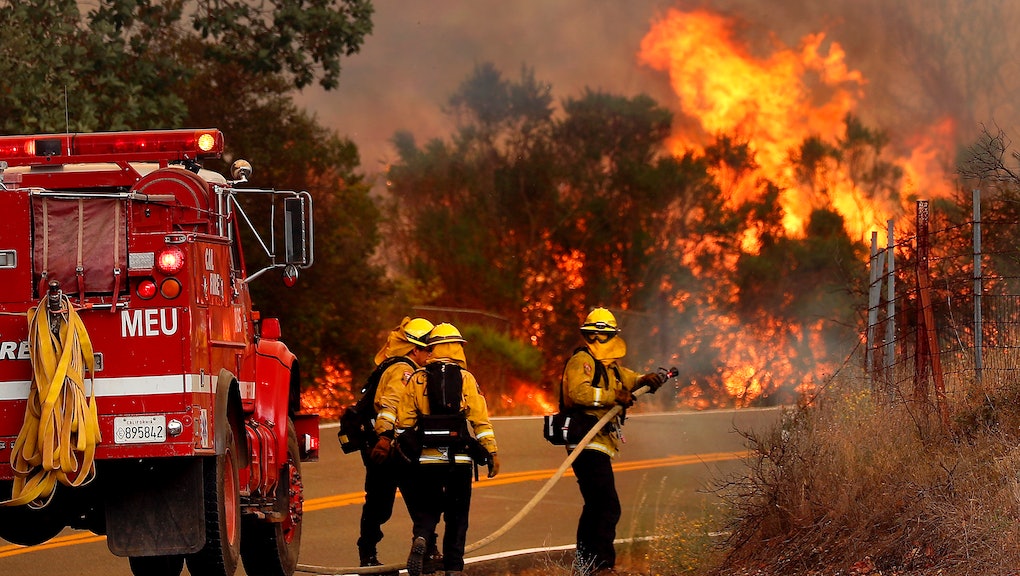 California is on fire. At a press conference on Wednesday, Governor Gavin Newsom said that there are at least 367 active wildfires burning across the state. Typically, when flames start to get out of control, California mobilizes its prison labor force, using underpaid incarcerated people who have been trained to be a part of fire crews. This year, the state is short of support. The inmates who would usually risk their lives on the frontlines combating wildfires are instead having their lives put at risk while coronavirus spreads through prison facilities.

According to a July report from the Sacramento Bee, 12 of the state's 43 inmate fire camps, where incarcerated people receive firefighter training, were placed on lockdown because of a major coronavirus outbreak at correctional facilities across the state. That left the majority of California’s trained crews unavailable to help combat the many ongoing wildfires that are still burning.

Outbreaks in prisons have been of significant concern as coronavirus spreads quickly in such confined spaces. The problem has been particularly stark in California, where infection rates have skyrocketed in recent months. The state went from zero infections within its prison populations at the start of June to over 1,000 by the end of the month. The uncontrolled outbreak was tied to transfers of inmates from one prison to another, where they were introduced without quarantine. According to the California Department of Corrections and Rehabilitation (CDCR), there are still 1,341 active cases of coronavirus affecting the state's incarcerated population.

Those infections put the livelihood of inmates at risk, and have left the state with less than half of its usual labor force when it comes to fighting wildfires. The state has relied on inmate fire crews to help control wildfires since World War II. According to the CDCR, the state has more than 3,000 inmates currently working on fire camps, and about 2,200 are considered qualified and capable of being sent into the field when necessary. On average, these inmate fire crews log more than three million hours responding to fires. The Sacramento Bee reported that incarcerated firefighters are the state's primary "hand crews," and are tasked with clearing the land of flammable material in hopes of controlling fires by cutting off their paths.

The practice of using prisoners to fight fires is not without its fair share of criticism. While CDCR touts that the program saves the state between $90 and $100 million per year, it is because the state is profiting off of the deeply underpaid labor of inmates. The incarcerated people on the fire crews make just $1 per hour for serving as the frontline in the fight against wildfires. Six of these firefighters have died over the last 35 years while combating flames in California, and many face additional health consequences from exposure to fire and smoke.

Some inmates have spoken highly of the program, but many view it as exploitative. A candidate for California's lieutenant governor called the practice “slave labor.” California has become so reliant on these incarcerated firefighters that during her time as California’s attorney general, Kamala Harris fought against efforts to reduce the prison population due to concerns that it would also shrink the state’s firefighting forces.

Despite the program getting called into question recently, California seems intent on keeping it. Right now, they need that labor more than ever before, but can't use it because prison officials allowed a coronavirus outbreak to sideline the inmate fire crews. The program may save the states millions by paying a pittance and putting vulnerable populations on the frontlines, but the state might want to ask if the savings are worth it while the state burns and its firefighting force is unavailable.