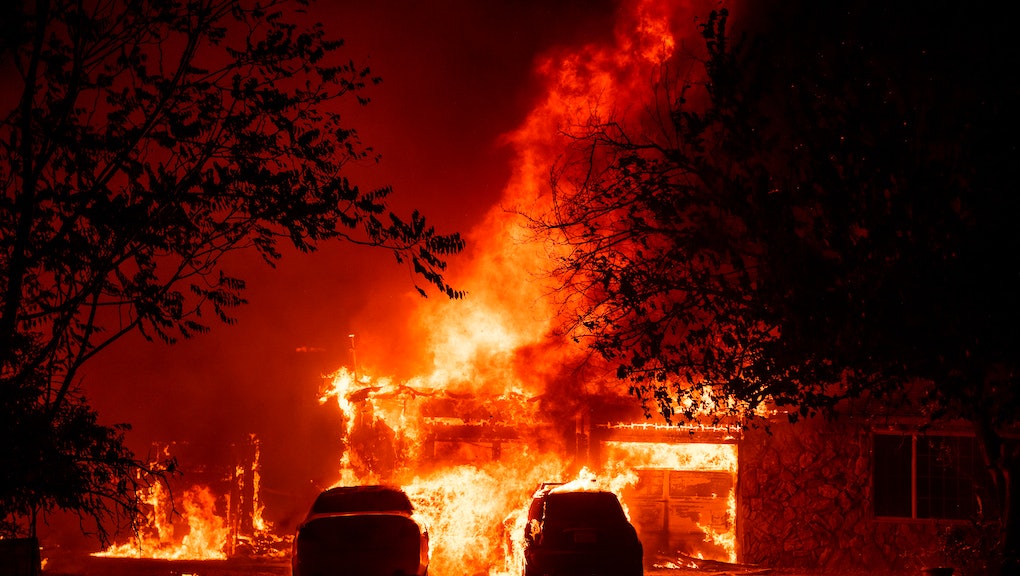 California is burning. Here's what you need to know about the wildfires currently raging in the state

California is under siege as wildfires continue to run rampant across the northern portion of the state. More than 100,000 people have been told to evacuate from their homes as the flames continue to encroach on densely populated cities, and many more have been left without power. As of Wednesday afternoon, there were at least 367 fires burning across the state.

Governor Gavin Newsom declared a state of emergency on Tuesday and called on the California National Guard to mobilize and help with relief efforts. Meanwhile, authorities in Sonoma County, near the capital city of Sacramento, have warned that the fires present an “immediate threat to life."

The wildfires currently tearing through Northern California have been blazing for several days and appear to have spread significantly overnight, pushing into Vacaville, a city of just over 100,000 people. According to the California Department of Forestry and Fire Protection, the wildfire there, known as LNU Lightning Complex, has already destroyed more than 50 buildings or structures and is threatening as many as 2,000 more if it continues on its path unabated. Four people have already been injured by the fire, but there have been no deaths recorded thus far.

The fire is currently covering more than 46,000 acres of land after growing more than 14,000 acres overnight, and firefighters have struggled to get the flames under control. Making matters worse is the fact Northern California is not the only region of the state dealing with an ongoing blaze. The Lake Fire in the Angeles National Forest, not far from Los Angeles, has been burning for more than a week now. That fire is now 38 percent contained, according to the National Wildfire Coordinating Group, but has forced thousands of people to evacuate and has destroyed dozens of homes and other structures. Meanwhile, the Loyalton Fire continues to burn within California's border near Reno, Nevada. Conditions there got so bad that the fire, combined with whirling winds reaching speeds of more than 60 miles per hour, caused the National Weather Service to issue its first-ever warning for a fire tornado.

As the numerous ongoing wildfires rage throughout the state, millions of people are feeling the effect, even if they are not in the direct path of the flames. A record-breaking heatwave is also hitting the state, resulting in Death Valley experiencing what may be the hottest temperature ever recorded on Earth. With the heat rising, as many as 3.3 million Californians have been left without power due to rolling blackouts across the state, the result of energy shortages caused by excess strain on the power grid.

California has been struggling with increasing numbers of wildfires for years now, some the result of natural occurrences like lightning strikes and some the fault of negligence by Pacific Gas and Electric, a major energy company in the state that has caused numerous fires with outdated and faulty equipment. Regardless of the cause, the fires have been exacerbated by hot and dry conditions that are attributed in part to climate change. The fires continue to be a public health and safety concern for many Californians, but they unfortunately don't appear to be stopping any time soon.