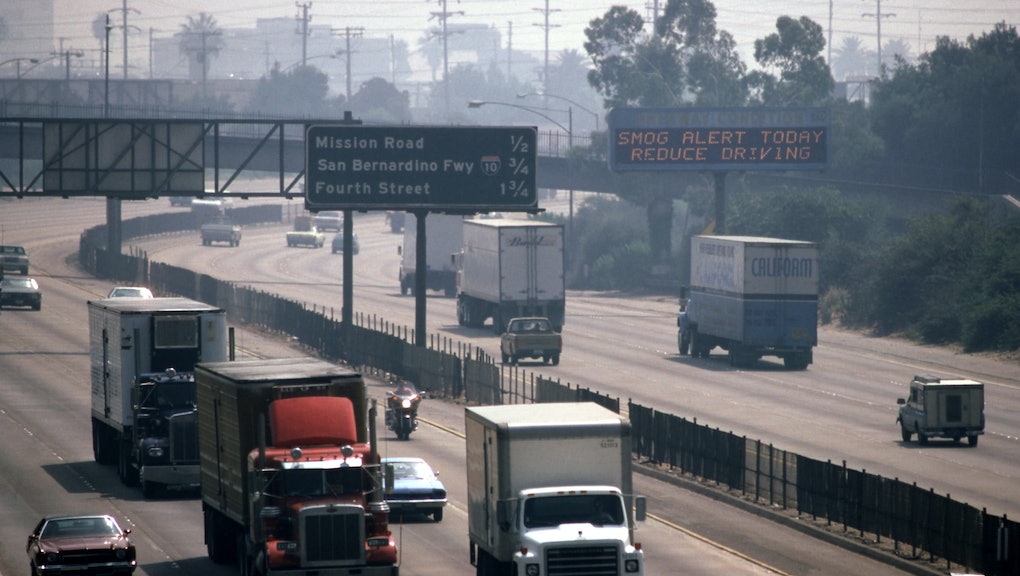 California is banning gas-powered car sales. Here's how it will work.

California Governor Gavin Newsom on Wednesday signed an executive order that will ban the sale of new gas-powered cars within the state's borders. The rule, which is set to go into effect in 2035, is one of the most meaningful efforts to curb California's growing diet of dirty burning fossil fuels.

In a statement, Governor Newsom called it the "most impactful step our state can take to fight climate change.” California is the second-largest consumer of oil in the United States, trailing only Texas, and accounts for nearly one percent of the world's total oil demand. The state also has nearly 30 million registered vehicles on the road, the vast majority of which are powered by combustion engines. Once the restriction goes into effect, the state projects that it will see a 35 percent overall reduction in greenhouse gas emissions statewide.

But California's overhaul of the cars that occupy its roadways will not happen as soon as the calendar turns over to 2035. While the state will place strict restrictions on passenger vehicles sold in-state, requiring all new cars to be electric or produce net-zero emissions, it will provide an additional 10-year transition period for heavy vehicles. The state also won't restrict used car sales, nor will it forbid residents from owning gas-powered vehicles, meaning oil-consuming cars will likely remain on the road for years after the ban goes into effect.

But even with the stipulations, Newsom's executive order is ambitious. It is by far the most aggressive attempt any state has made to curb the negative environmental effects of transportation, which is currently the sector responsible for the most greenhouse gas emissions. And while the ban will only apply in California, the state’s regulations have a history of shifting automakers’ behaviors. That could produce ripple effects across the country as the industry is spurred into creating new, net-zero emission options. Or it may further exacerbate an existing divide in the car marketplace — one where some cars are made just to California's specifications, and other, less efficient options putter along on the roads of other states.

California has long been a leader in pushing car manufacturers to clean up their acts. It has been a nearly half-century-long effort launched by the state after its cities, particularly Los Angeles, were inundated with smog caused by car pollution in the 1950s and 60s. Through strict environmental policy, including pushing car makers to create more fuel efficient vehicles, the state has largely turned around its smog problem. A recent study found that the city actually had some of the cleanest air in the world, thanks in large part to the vigilance of regulators in the state.

"In the past, California has been very successful in implementing new standards and then convincing the federal government to align the national standards with the California standards," Kenneth Gillingham, associate professor of environmental and energy economics at Yale School of the Environment, tells Mic. "There is a strong argument for aligning the standards because it is much easier for automakers to comply with a single national standard than different standards in different states."

Even as President Trump has attempted to undo pollution restrictions and fuel efficiency standards placed on carmakers, which were first put in place in part due to California's own policymaking, the state managed to carve out its own deal with Ford, Volkswagen, Honda, and BMW to continue producing cars that meet the state's fuel efficiency standards, effectively ignoring Trump's decision to give those companies the go-ahead to produce gas-guzzling. With California now signaling that even the most fuel efficient cars won't be welcome within the state's borders in the coming decades, those car companies may choose to ramp up the infrastructure to produce electric vehicles. The alternative would be to abandon the country's biggest car-buying market.

However, just because California is taking the lead on the issue does not mean that others will be guaranteed to follow. Making cars more fuel-efficient is typically a matter of changing certain parts, like tailpipes and drive trains. The shift to electric vehicles is much more drastic, requiring a potential overhaul to a state's existing infrastructure for vehicles. David Rapson, an associate professor of economics at the University of California, Davis, and director of the Davis Energy Economics Program, tells Mic that moving away from combustion engines and leaning into electric vehicles will put a new strain on California's electricity grid. Making sure the power is available either means ramping up renewable energy sources in a way that is not currently available or continuing to rely on dirty-burning fuel sources like natural gas to power parts of the grid.

"[Ensuring] electricity grid adequacy will either be expensive or reliant on natural gas," Rapson says. "Currently California has the most expensive electricity in the continental U.S. Is that sustainable if policymakers want to encourage electric vehicle adoption?" Rapson also raises an inherent conflict at play, noting that stabilizing the grid by utilizing fossil fuels would directly undermine the goal of decarbonizing the transportation sector.

California may face another problem as 2035 approaches: consumers might just not like electric vehicles. "We still haven’t figured out whether people want to drive electric vehicles," Rapson notes. "So far the market is heavily subsidized, and without those subsidies, it’s possible that half of the current EV drivers would have preferred a gasoline car." Part of that might be solved by the new demand on automakers to make these cars more desirable. "This gasoline car ban may also mean that the automakers will invest more in electric vehicles, which could drive down the cost of batteries and make them more affordable in general," Gillingham argues.

California alone may not be enough to push the automotive industry to make these changes. "I doubt it affects them much unless the rest of the country adopts the same policy," Rapson says, noting that grid-related issues may prevent other parts of the country from jumping on board. But it's clear that some states are interested in taking this path. Washington and Hawaii have both proposed, but not adopted, plans to ban gas cars by 2030, and may be encouraged to join California to strengthen the movement toward net-zero emission vehicles. "Many other states will likely follow California’s lead, and if a large enough coalition of states also includes gasoline car bans, it may lead automakers to switch more completely to electric than they would have otherwise,” Gillingham says. That would result in the market effectively flipping, with electric becoming the default and gas cars only being available in certain regions.

California already has the largest adoption rate for electric vehicles, according to Gillingham, with 6.1 percent of new car sales in July 2020 being electric. But nearly 95 percent of new cars sold in the state are still gas-powered, which points to a long road ahead.The state has already carried the country to better, more efficient cars in the past, but this could be its most challenging lift to date.

More like this
What cities will be most affected by climate change?
By Vanessa Taylor
Google Earth's new Timelapse feature is a rude awakening for climate skeptics
By AJ Dellinger
Leaked calls reveal the conservative "master plan" to tank climate action
By AJ Dellinger
Stay up to date