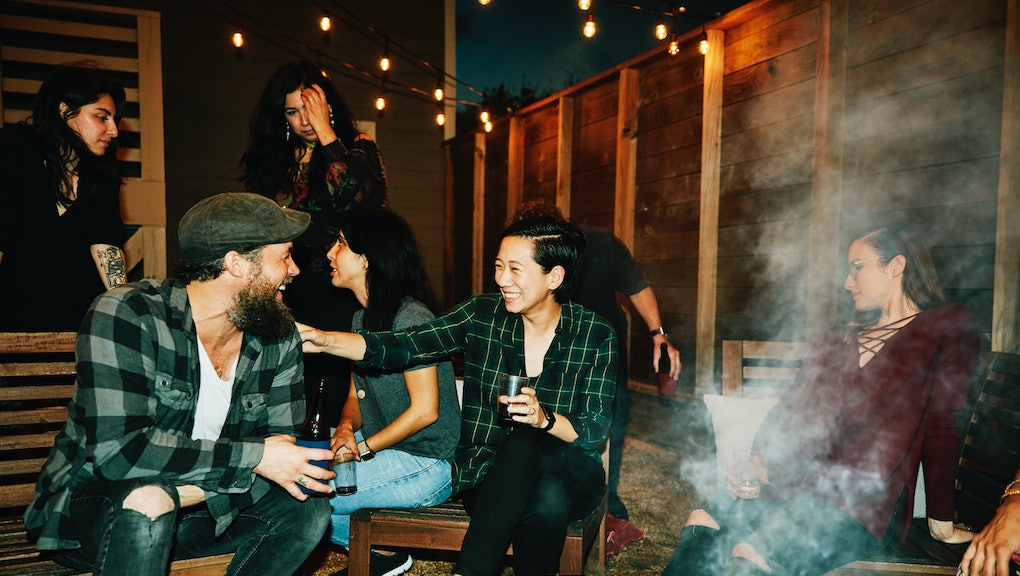 Can an introvert choose to become an extrovert?

I am an introvert. That means that I recharge my emotional batteries by spending time alone. Despite the fact that extroverts seem to have an easier way in the world, I have always liked being an introvert. I like my own company. Ain’t nothing wrong with that. Except that in the past few years (read: since I’ve been single), I have started to feel more lonely when I’m alone. It isn’t that I like my own company less, it’s just that I’m hungry for connection. This led me to wonder: Can an introvert choose to become an extrovert? I asked some of my favorite mental health experts what they thought.

“One of the things that I love about the theory and application of Myers Briggs Type Indicator — a personality test that measures introversion and extroversion — is that it encourages people to work on their ‘non-dominant preferences,’” says Lisa Orbé-Austin, a New York-based psychologist and career coach. She suggests that introversion and extroversion are dynamic personality traits that exist on a continuum. While you might have a preference for introversion, it’s malleable. Working on your non-dominant preferences, she says, would mean practicing extroverted behavior, she says.

Orbé-Austin says that introverts who want to explore their extroverted side should explore hobbies and relationships that expand our relationships and a sense of connection. For instance, maybe I could try doing some of the things I love to do with other people who like doing them too and ideally, we would bond. Remember that your preferences are real, but they are still just preferences. They are not needs. I do not need more alone time if I am feeling isolated.

Aimee Daramus, a Chicago based psychotherapist has a slightly different take than Orbé-Austin on how much these personality traits can — and should — shift. “Since introversion and extroversion are influenced by genetics, they can be very resistant to change, so you probably can't just decide to become an extrovert,” she says. “In general, extroverts seem to be happier, but there are ‘happy introverts’, too, so you could definitely work toward becoming a happier introvert.” This week, in radical acceptance: Trying to change your perspective on your personality instead of your personality itself.

Even if your introverted personality is so strongly established that you can’t change it, you can push the edges of your comfort in ways that help you grow. Current research suggests that you don’t have to actually be an extrovert to reap the happiness that socializing brings — you can just act like one.

Even if your introverted personality is so strongly established that you can’t change it, you can push the edges of your comfort in ways that help you grow.

Happiness isn’t some magically innate personality trait though, Daramus tells Mic. “Happiness in both extroverts and introverts is connected to ‘mood maintenance,’ which is the ability to make choices and interpret events in a way that helps you maintain a good mood in that situation,” she says.

For example, if I keep telling myself that I am happiest alone, I probably will be. So, then, for the sake of experimentation, I could start reminding myself of how good it feels to laugh or have stimulating conversation with a small group of people. That’s actually true. When I do go out with people, I almost always have a great time. But I often don’t actually go out because I tell myself that I’m happier alone. It’s a self-defeating internal dialogue.

I feel exhausted by socializing because when I’m nervous, I talk a lot to fill up space. Orbé-Austin explains that I don’t have to choose between these two poles of social discomfort: wearing myself out by talking too much or not talking and feeling inadequate. There’s a middle ground. “You want to engage in ways that feel authentic to you, where you are still present with those around you,” she says. “You can look for opportunities to hang out with a variety of people who are not only extroverts, but also introverts, which will allow for more room to show different styles of being social.” In other words, if I spend time with a variety of other people, some of them (extroverts) will take up the conversational slack, and others (introverts) will also want to engage quietly. Go figure.

Experimenting with your social preferences is healthy, but both Orbé-Austin agree that it’s important to respect expand my comfort zone gradually. “If you are feeling lonely, it is probably a good idea to break up the habit of spending every night at home with a night or two a week doing something with others,” says Orbé-Austin. “At first, you will be better off choosing something that you know that you will enjoy and once you have established a habit of being social once or twice a week, then you can start doing things that aren't a guaranteed good time and are more of a risk for you socially to expand your repertoire of social activities.”

“The best thing to do is join activities that really interest you,” Daramus adds. “An extrovert wouldn’t need to this because they ‘recharge’ through social interaction. Going to a paint night, book discussion group, joining a sports team, or doing something else that you’re already into might be the easiest way to get more of a social life.” Basically what they’re telling us, dear introverts is, yes, you can hang, but make sure you’re doing things you actually want to do. Extroverts are down for whatever, and that’s cool, but you can pick and choose.

After a while, your ideas about what is fun may change. But until then, it’s important that introverts take care of themselves after social events. Orbé-Austin suggests scheduling time after for journaling and quiet time. And as obvious and cheesy as it sounds, drench your inner dialogue in kindness.

“A lot of people still think that there's something wrong with being an introvert and that extroverts are ‘better,’” she says. “One isn't better. If you think there's something wrong with you, and you ‘should’ be fundamentally different than you are, you might need to work on accepting that you're okay the way you are, so that you can be alone or around people and accept that you don't owe it to anyone to be different.”

More like this
What are neopronouns and how do they honor identity?
By Tracey Anne Duncan
Jamal Jordan's 'Queer Love in Color' is the expression of joy my inner child needs
By Joseph Lamour
Doctors treating trans youth grapple with uncertainty, lack of training
By Stef M. Shuster
Stay up to date