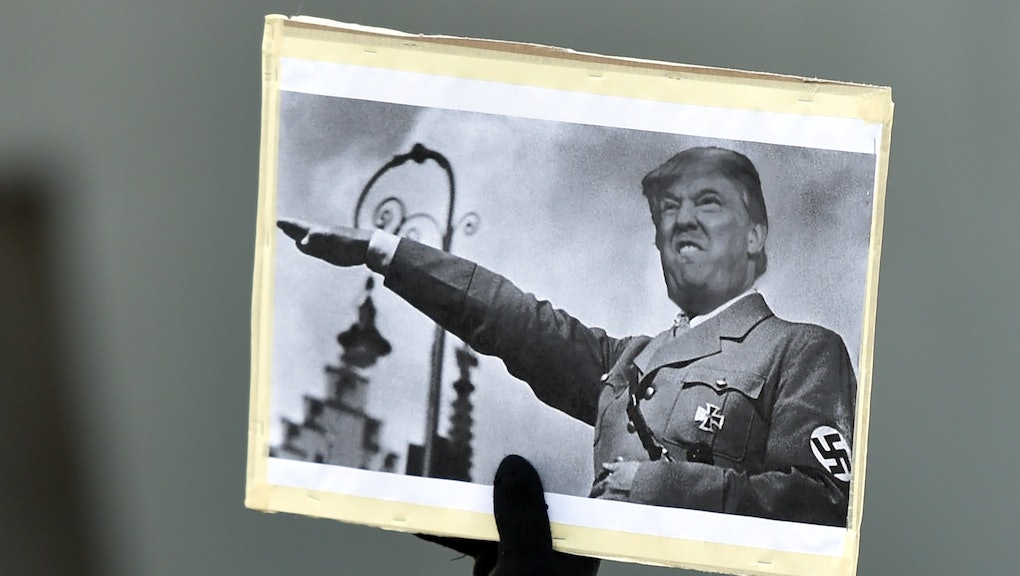 Can we please stop debating whether Trump's Nazi moments are accidents?

On Wednesday morning, progressive Jewish group Bend the Arc noticed a strange similarity between one of the t-shirts President Trump currently sells in his online campaign store, and the conspicuously comparable official Nazi party logo, the Iron Eagle.

The similarities are undeniable: a stern-eyed eagle, facing rightward, wings spread as it perches on a circular icon featuring a country's national symbol.

Within hours, the Trump campaign responded to Bend the Arc's tweet, noting that multiple Democrats have worn various iterations of the eagle iconography — ones which bear a vague resemblance to, but are not nearly as similar as, the Third Reich's logo.

And then, as quickly as it started, the "is-it-isn't-it" debate between the progressive group and the president's official re-election team did what most Twitter fights do: faded into insta-past of most people's fast-moving timelines, where it will likely languish in relative obscurity until someone unearths it the next time the president publicly dabbles in some form of public fascism. Lather, rinse, repeat.

We are now nearly four years into the Trump administration. In that time, the president has staked his first term in office on a racist, isolationist slogan, described white nationalists as "very fine people," insisted on using a racist phrase to describe a global pandemic, cribbed Nazi concentration camp symbology, and, just days earlier, thanked the "great people" who enthusiastically chanted "white power" during a recent event in Florida. And that's just the superficial stuff! Let's not forget the president's actual policies of caging immigrant children, banning Muslims from entering the country, and encouraging overt state violence on any voices of dissent.

So why the hell are we still debating whether these movies are purposefully racist, or Nazi-esque, or fascist, or whatever terminology you prefer? (Personally, I think more than one term applies.) Anyone gullible enough to think Trump and his team deserve the benefit of the doubt at this point — as if he ever deserved it in the first place — should be put on an ice floe and sent drifting off into the sunset. At a certain point, even the most credulous optimist has to see the sum total of (what could barely be called) "fascist mistakes" — Wednesday's 14-word Twitter ode to "heritage" is another example — not as a series of flukes, but the cumulative work of someone who genuinely is what he seems to be.

Look, for some of us, it's been obvious from the jump: The president's history of dubious familial KKK adjacency and (unfunded) allegations of Hitler-philia and extremely public dalliance with coarse racism were enough to fly a big red flag over his head the moment he entered politics. But now, after years of proving exactly who he is, time and time again, even the holdouts who chose to explain away an offensive tree, rather than see the whole racist forest, have run out of wiggle room.

And the more energy we waste on arguing over the painfully obvious, the less we have to actually do anything about it.