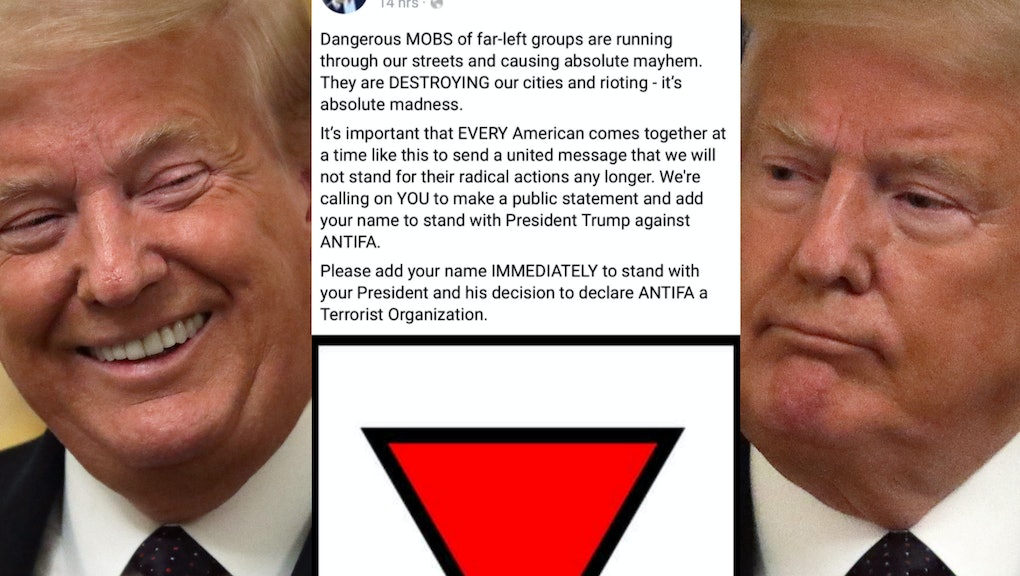 As your humble news blogger, it is my sincere and unfortunate responsibility to notify you, dear reader, that President Trump is at it again. And by "it," I mean "Nazi-esque stuff," and by "again" I mean "(deep sigh) yes, again."

This time, it came in the form of a Facebook ad put out by the president's "Team Trump" re-election page, which encouraged recipients to "add your name IMMEDIATELY to stand with your president and his decision to declare antifa a terrorist organization." Without explanation, the ad also featured the image of an inverted red triangle.

So what is this seeming non-sequitur of a symbol? As it happens, an inverted red triangle is the exact same icon that Nazis used to mark political prisoners — communists, freemasons, etc — in the concentration camps during the Holocaust.

Incredibly, the Trump campaign insisted that their otherwise inexplicable choice for the ad's image was, in fact, both an emoji and a "widely used" symbol used by antifa, or the far-left anti-fascist movement that has proved to be a reliable bogeyman for the president.

As multiple Twitter sleuths pointed out, however, the image shared by the Trump campaign team in justifying its graphic has essentially zero digital footprint save for a single t-shirt design by a Spanish graphic artist who, according to at least one amateur investigator, created his online storefront around one week ago.

1) The Trump team is so desperate to paint a loose affiliation of progressive activists and radicals as "terrorists" that it leaned on a single online vendor to flesh out a major campaign ad...

2) The Trump team knows exactly what it's doing, and is using classic Nazi iconography to animate its base of white nationalists and other assorted bigots. (For the particularly conspiracy theory-minded among us, The Washington Post pointed out that the campaign ran 88 ads featuring the symbol, and the first sentence of the ad is 14 words — two numbers that have specific significance to neo-Nazis.)

While the Trump campaign and its allies scrambled to portray the ad as a simple graphic design choice with no dog whistles for the president's diehard racist supporters, this is hardly the first time Team Trump has leaned on racist iconography to vilify his perceived enemies. During the 2016 campaign, the president infamously shared an image of Hillary Clinton that prominently featured a Jewish "Star of David" over a background of money. And just last month Trump, lauded notorious anti-Semite and Nazi icon Henry Ford, insisting Ford had "good bloodlines" during a speech at a Ford manufacturing plant in Michigan.

Whether an honest mistake, or an insidious nod to his racist base, Facebook made the rare decision to remove the president's ads entirely, stressing in a statement to NPR that "our policy prohibits using a banned hate group's symbol to identify political prisoners without the context that condemns or discusses the symbol."

Given the president's long history of flirting with anti-Semitism, however, the question to me is less "was this deliberate?" and more "how long until we have this same debate again over another 'accidental' Nazi-esque whoopsie?"