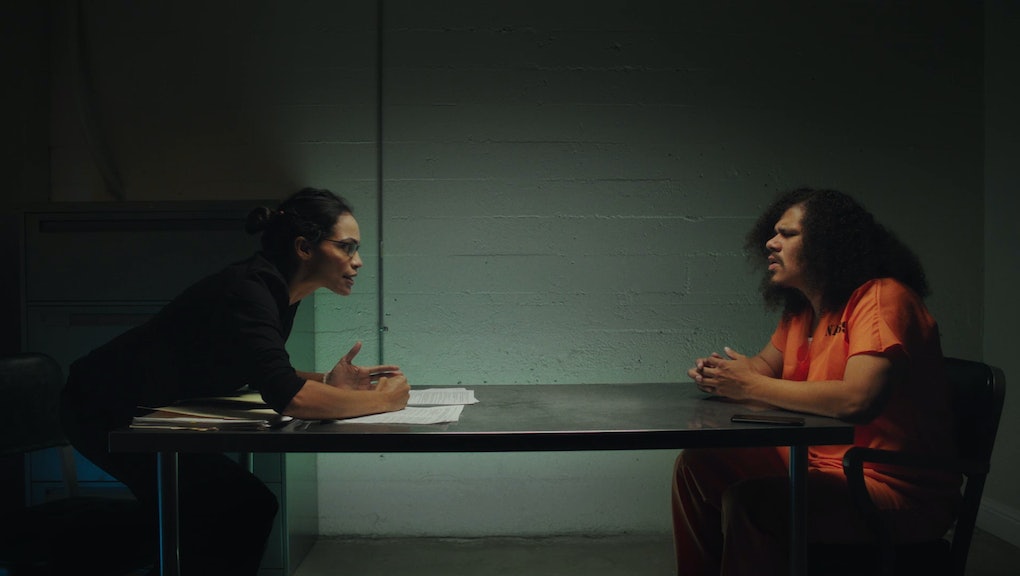 Courtesy of the North Pole

Can web series 'The North Pole' soothe our existential dread?

The constant onslaught of news about how terrible everything is can make apathy tempting in 2019. Jonathan Franzen, writing in the New Yorker, argues that trying to save the planet from a total climate crisis “has the feel of Kafka’s fiction.” He makes the case that the planet is beyond repair and that instead of preventing further destruction, we better start thinking about the inevitability of chaos. The antidote to that pessimistic notion can be found in a Youtube web series called The North Pole. No, really.

The North Pole is a web show executive produced by an organization called Movement Generation, as well as actress and activist Rosario Dawson. It’s set in Oakland, California and follows four young people as they navigate gentrification, climate change, immigration, health care, social media, and activism. It’s a show about the world we inhabit and filled with “the issues.”

The first season begins with a spoof of a safari tour, where we are introduced to Marcus (Donte Clark), Nina (Reyna Amaya), and Benny (Santiago Rosas), scoping out the white newcomers to the neighborhood. In less than 10 minutes, “Endangered” introduces you to the North Pole, a part of Oakland experiencing the telltale signs of gentrification — Nina and Marcus have to find a new roommate, Finn (Eli Marienthal), just to afford the lastest rent hike. The North Pole doesn’t bother with trying to find high ground to preach from. The characters come as flawed as they do motivated; They have jobs at unscrupulous corporations, they care too much about their social media followings, they feel unsure of how to confront racist family members. Like many of us, they feel angry at the system but don’t know how to create change.

“A lot of the show is about humanizing issues, about making them tangible,” says the series’ director, Yvan Iturriaga, in a phone call with Mic. “Especially relating to climate change. We usually are hit with these apocalyptic scenarios that are impossible to stop. And the reality is that there are things we can do, there are things that are being done now. It’s just that people aren’t connected, and people lack hope.”

In the first season, Benny, Finn, Nina, and Marcus organize the community to protect a neighbor from homelessness and offer support for a friend with a tenuous immigration situation. For a show that grapples with such weighty themes, it never gives itself over to corniness. It helps that The North Pole dabbles in magical realism — a talking polar bear appears to Nina in moments of crisis, a group trip on mushrooms results in visions of talking flowers, Vikings, and endless fences in the middle of the forest, a showdown with the sheriff pulls the literal and the metaphorical into one reality.

“The show has to work as a story,” says Josh Healey, the head writer and executive producer of the show. “When we’re in the writer's room, our number one goal is: ‘Does this move us? Does this move me, emotionally?’ Before it moves me politically — before we hit people politically our goal is, we want to hit your heart, your mind, and your funny bone.”

By the premiere of season two, Benny, Finn, Nina, and Marcus have prevented an unlawful eviction happening in their neighborhood, but their success came at a price. Benny, who is undocumented, was arrested and held in an immigration detention center while he awaited word about what would happen next. Throughout the second season, he would have to reveal his status to his friends and learn to rely on his community as he deals with the possibility of being deported.

“The main character Benny, in the second season his story is based on a really close friend of mine from high school. We all knew him as Puerto Rican Eddy, but then it turns out that he was Salvadoran, and he was facing deportation.” Iturriaga recalls. A son of Chilean exiles, Iturriaga knows the importance of portraying people who lived through the unimaginable as more than just victimized. “We’re humans, and we have multiple layers. I think that’s what is important about what we do, is to try to show the complexity of being human beings. It’s rare that folks of color are shown as complex human beings.”

Healey agreed. For season two they brought in Reyna Amaya and Donte Clark to the writer's room — a move they say helped keep the dialogue true to real life. “You know we laugh to keep from crying,” Healey says. “Humor is the entry point to these hard conversations. We want to make it entertaining, we want to make it joyful, and then, we’ve got something that we want to say.”

“The key is authenticity,” Iturriaga says. “This show is made by people who are from that community, and all these stories and all these people are based on real people, and real scenarios.”

Though it often feels like we are constantly and relentlessly confronted with everything that is bad in the world, The North Pole manages to inspire genuine enjoyment. The series makes a strong case against apathy. There is joy in the struggle, and joy in watching a show about it, too.

“What are we supposed to do? Just throw our hands up and let our children and our grandchildren drown? That’s not really an option. I think it’s okay to acknowledge the pain and mourn the realities," Healey says. "But whether we’re talking about climate change or we’re talking about white supremacy in Trump’s America, what choice do we have but to fight?”

More like this
'Exterminate All the Brutes' is a messy, ambitious documentary that ties together genocide, white supremacy, colonialism ... and Josh Hartnett?
By Nicholas Russell
'The Nevers' will be so much better when Joss Whedon has nothing to do with it
By Kara Weisenstein
Nobody is more qualified to host 'Jeopardy!' than LeVar Burton
By Kara Weisenstein
Stay up to date